Why Did Donna Strickland Not Have a Wikipedia Page? 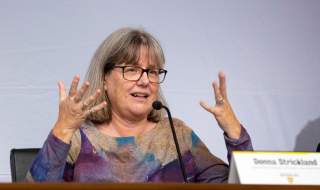 Almost as soon as Canadian physicist Donna Strickland was named as only the third woman in history to win the Nobel Prize for Physics, the internet pulsed with the drumbeat of “sexism.” The Atlantic was the first to break the news that, at the time of her award, Professor Strickland did not have an entry on Wikipedia. Worse, an article about her had been submitted to Wikipedia in March and rejected in May for lack of notability. Wikipedia had apparently concluded that Donna Strickland was not important enough to merit an article. Inevitably, two days later The Guardian piled in with accusations of “the marginalization of women in science and gender bias at Wikipedia.” The rest of the mainstream media picked up the theme. Everyone from the Irish Times to the South China Morning Post piled in to vilify the latest male-dominated organization to ignore women’s accomplishments. Wikipedia itself admits that roughly 90 percent of its all-volunteer editors are male, despite many efforts to recruit more women to the site.

First, in the Washington Post in September 1995 as the former graduate student of fellow Nobel laureate Gérard Mourou;

Second, in a University of Waterloo press release in October 1999 as one of three professors winning a research grant;

Third, in the Kitchener-Waterloo Record (today known as The Record) in February 2002 as a teacher in the University of Waterloo’s photonics program;

Fourth, in an Optical Society of America press release in January 2008 as one of fifty-four scientists made fellows of the society;

Fifth, in Laser World in May 2010 alongside her mentor Gérard Mourou as one of dozens of researchers in a comprehensive history of laser research;

Sixth, in the American Scientist in September 2010 as having been Gérard Mourou’s graduate student back in 1985;

Seventh, in the Guelph Mercury and Waterloo Region Record in November 2010 telling high school students that it’s okay to be a nerd;

Eighth, in Business Wire in October 2011 as one of four panelists on a discussion of women and minorities in science;

Ninth, in Electronics Weekly in July 2014 as one of dozens of authors of academic papers mentioned in a patent application;

And that’s it—nine mentions. According to Factiva, no one in the mainstream media had ever interviewed Donna Strickland about her research before this week. No one had even written about her research. If there is sexism afoot, it’s not on Wikipedia. It’s in the press itself.

The mainstream media seems eager to accuse anyone of sexism—except itself. The world’s media have united to beat-up on an all-volunteer organization for certifying the media’s own sexism. Any science reporter for The Atlantic or The Guardian or any one of a dozen other publications could have featured Professor Strickland before this week. None did.

No doubt Professor Strickland deserves the recognition she is now receiving. No doubt there are many other women out there who deserve more recognition than they are getting. And no doubt the mainstream media is perpetuating sexism in society by ignoring them. But if the mainstream media wants to see the face of sexism, it shouldn’t look to the (mostly male) volunteers who run Wikipedia. It would do better just to look in the mirror.