Why Did Israel Support the Kurdish Referendum? 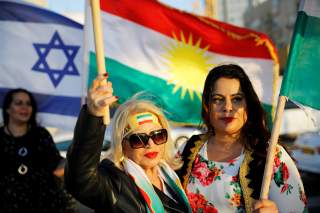 Israel was alone in its support for the Iraqi Kurdish referendum in September, and it has since become evident that KRG President Masoud Barzani miscalculated in deciding to hold the vote then. The Kurds overestimated both U.S. support for their independence movement and their own internal solidarity, while simultaneously underestimating the intensity and the near unanimity of the international community’s opposition to Kurdish independence. Erbil is now paying the price for its mistake, as the Iraqi federal government has retaken much of the disputed territory that the Peshmerga controlled since 2014 and closed the Kurdistan Region of Iraq (KRI) airspace. Israel, too, will likely suffer negative consequences as a result of Erbil’s overreach—so did Jerusalem commit a strategic error in supporting Barzani’s secessionist agenda?

It is true that Israel could suffer negative consequences as a result of the Kurds’ failed bid for independence? The PUK and Gorran parties, rivals of Barzani’s KDP, stand to gain from Barzani’s misstep and the ensuing crisis, and they are far more oriented towards Iran and against Jerusalem. The rise of pro-Iranian forces in a previously friendly environment could make Israel’s reported use of KRI territory for intelligence collection and operations significantly more difficult. In addition, U.S. influence will likely be damaged as a result of the Iraqi-Kurdish confrontation: Washington’s abandonment of its long-standing Kurdish allies (once more) and its apparent incompetence or impotence in mediating an imminent military clash between its two allies undoubtedly tarnished its reputation among friends and enemies alike. What is good for America is good for Israel when the latter derives the benefit of increased deterrence as a result of its relationship with the former, and this development has negative repercussions for both.

However, Israel’s declaration of support for Kurdish independence was probably not an important factor in Erbil’s decision to hold the referendum. Unless the Kurds vastly overestimated the degree to which Israel would diplomatically and/or militarily support their bid for independence, Israel’s rhetorical support and limited under-the-table cooperation should not have significantly altered Erbil’s calculations. Furthermore, in light of Washington’s policies regarding Iran’s presence in Syria and the Israeli-Palestinian peace process, it would have been a serious analytical error to assume Jerusalem’s ability to influence U.S. foreign policy, even on issues that are of critical interest to Prime Minister Benjamin Netanyahu.

Even if it were to threaten to withdraw its support from the Iraqi Kurds, Israel likely could have done little, if anything, to change Barzani’s decision to hold a referendum. In fact, the Kurds had a number of compelling reasons for moving towards independence at this time, including: the belief that they had a small window during which they would receive U.S. support before Washington disengaged from Iraq, deflecting attention from domestic economic and political problems, and Barzani’s desire for a legacy before stepping down from the presidency. These considerations touch on critical KRG interests and likely factored into Barzani’s decision far more than the prospect of Israeli support for Erbil.

At the same time, Israel had much to gain and very little to lose from supporting Kurdish independence.

Kurdish independence itself is not necessarily a positive development for Israel, but it creates the possibility for Israel to reap a major strategic advantage: a well-positioned ally. Having an ally along the Iranian and Turkish borders could have provided Israel with a platform to counterbalance the strategies of Teheran and Ankara, which seek to apply pressure on Israel by allying with hostile entities on its border. In addition, unlike the other countries in the region with which Israel has either peace treaties or under-the-table cooperation, the Kurds are not preoccupied with the Palestinian issue. As a result, the potential Jerusalem-Erbil relationship would not have necessarily stalled at a cold peace. Of course, there is no guarantee that a Israeli-Kurdish relationship would have come to fruition even if the Kurds did achieve independence with Israeli support; nonetheless, Jerusalem’s lone voice of support for Kurds would likely have increased the goodwill in Erbil and hence the likelihood of achieving that outcome.

The largest risk that Israel assumed by supporting Kurdish independence is that doing put it at odds with U.S. support for maintaining the integrity of Iraq—for which Washington has already committed hundreds of billions of dollars. However, support for Abadi instead of Barzani was hardly consensus in Washington: even senior Republican officials like Senator John McCain came out in support of the Kurds. If top U.S. officials can declare their support for the Kurds, Washington could hardly be annoyed that Israel did the same. Furthermore, Washington’s main goal in delaying Kurdish aspirations was to avoid a clash between Baghdad and Erbil. Now that the dispute is underway, it is not clear whether the United States considers it to be in its interest that it Kurdish partners are strangled by questionable friends and irrefutable enemies.

Israel was probably not a significant factor in the Kurdish decision to move forward with the referendum; it is not a global power, it does not share a border with the KRI, and it does not have trade relations with it comparable to those of Turkey or Iran. That being said, Israel had much to gain from a potential Jerusalem-Erbil alliance and little to lose by supporting the Kurdish efforts in motion. Despite the failure of the Kurdish bid, Israel was right to bet on Barzani.

Ari Heistein is the special assistant to the director at the Institute for National Security Studies in Israel.