Why Did the New York Times Seek To Silence Bari Weiss? 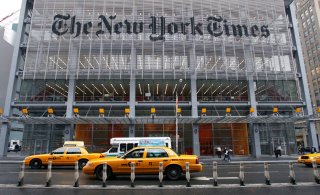 A few weeks ago, the political scientist Yascha Mounk launched an online platform called Persuasion. In it, he observed, “It is difficult to convey just how many amazing writers, journalists, and think-tankers … have privately told me that they can no longer write in their own voices; that they are counting the days until they get fired; and that they don’t know where to turn if they do.” Next, an open letter, which Mounk, among others, signed, appeared in Harper’s. It appeared in part to serve as a riposte to the defenestration of former editorial page editor James Bennett at the New York Times, whose sin was publishing an op-ed by Sen. Tom Cotton. The letter stated, “Our cultural institutions are facing a moment of trial.” But the Harper’s letter and Persuasion did not persuade everyone: Mounk was promptly denounced in the New Republic, which maintained, “in their obsession with the left and cancel culture, Mounk and his fellow travelers are dangerously close to suggesting that the free society we enjoy is as much under attack from the left as from the right.”

But are Mounk and Co. seeing ghosts? Or are they warning about a real development? A scorching resignation letter from Bari Weiss who has worked at the Opinion section of the New York Times for the past four years as a staff editor and writer is sure to heighten the debate over political correctness at America’s leading media organizations. Weiss, who left the Wall Street Journal to join the Times, addresses her epistolary effort to the paper’s publisher, A.G. Sulzberger. In her letter, Weiss suggests that the paper is sacrificing its standards to accommodate the prevailing political trends on the Left, that, in effect, Twitter is “editing” the paper, and that she herself was subjected to “constant bullying” for expressing her views. If her account is accurate, then the newspaper has disgraced itself.

Weiss has herself long been a figure of controversy for writing such heterodox essays such as “Three Cheers for Cultural Appropriation” and for her impatience with modern feminists. As a controversialist, she surely welcomed a good deal of the outrage her pieces incited. The more she was attacked, the more her profile rose. In the May 2019 Vanity Fair, Evgenia Peretz observed, “For writers hoping to gain a following, slamming Bari Weiss has become an easy way to be seen. It wouldn’t matter if she were writing for The Wall Street Journal. The problem—or opportunity, really—is that she’s writing for The New York Times, which is supposed to be their paper, and that she’s getting famous for it.”

But something appears to have snapped during Weiss’ tenure at the Times. She indicts the newsroom atmosphere as a hotbed of intolerance in which views that do not comport with the regnant progressive beliefs are treated as heretical. According to Weiss, “If a person’s ideology is in keeping with the new orthodoxy, they and their work remain unscrutinized. Everyone else lives in fear of the digital thunderdome. Online venom is excused so long as it is directed at the proper targets.” She adds, “my own forays into Wrongthink have made me the subject of constant bullying by colleagues who disagree with my views. They have called me a Nazi and a racist; I have learned to brush off comments about how I’m ‘writing about the Jews again.'”

The Times issued a carefully layered corporate response to Weiss’ cri de coeur. Acting editor Kathleen Kingsbury responded, “We appreciate the many contributions that Bari made to Times Opinion. I’m personally committed to ensuring that The Times continues to publish voices, experiences and viewpoints from across the political spectrum in the Opinion report. We see every day how impactful and important that approach is, especially through the outsized influence The Times’s opinion journalism has on the national conversation.” But the question isn’t the “outsized influence” that the Times has—what publication does not seek to influence public debate as much as possible?—but whether it is open to publishing provocative and controversial pieces from more than an ideologically narrow frequency band.

Weiss will presumably elaborate on the affair in coming days. She will prosper from the controversy which amounts to a form of breaking ranks. But it is a perturbing sign of the times that she seems to have been too radical for the Times—and that the paper did nothing to prevent her colleagues from vilifying her.