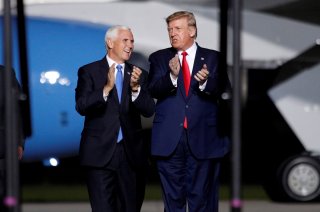 For foreign policy America First-ers, economic nationalists, and immigration restrictionists, the case for President Donald Trump’s reelection is strong and straightforward, even though the implementation of these policy course changes has been needlessly uneven.

For supporters of the above measures still gripped with doubt, and undecided Americans, the three main reasons for voting Trump are arguably even stronger.

First, between the Trumpist trade and immigration overhaul, and his tax and regulatory cuts, it looks like the president has hit upon a combination of policies that could both ensure improved national economic and technological competitiveness, and build the bipartisan political support needed to achieve these goals.

For years before the Trump era, more realistic trade policies boasted the potential to square a major circle for U.S.-based businesses—and manufacturers in particular. By curbing imports from countries with no serious protections for the environment, workplace safety, labor rights, and the like, tariffs could enable these domestic businesses to maintain and increase competitiveness even under the kinds of stringent regulatory regimes they’ve typically resisted. The prospect of a big regulatory payoff would appeal to many liberals and progressives, too.

Whatever the promise of this approach, the Trump administration has chosen a different

combination of policies for the economy—high tariffs, tax and regulatory relief for business, and immigration restrictions that have tightened the labor market. And the strength of the pre-Chinese Communist Party Virus economy—including low unemployment and impressive wage growth for lower-income workers and minorities—attests to its success.

A Trump victory not only could continue this approach. But the president’s renewed political strength, buoyed by support from more economically-forward-looking Republicans and conservatives like Senators Marco Rubio of Florida and Josh Hawley of Missouri, could produce a more complete economic revival strategy that would include family-friendly tax and regulatory

policies (like childcare expense breaks and more generous mandatory family leave), and more ambitious industrial policies that would work in tandem with tariffs and sanctions to beat back the China technology and national security threat.

Moreover, a big obstacle to this type of right-of-center (or centrist) conservative populism and economic nationalism would be removed—the president’s need throughout the last four years to support the stances of Congress’ still long list of conventional conservatives in order to ensure their support against impeachment efforts.

A second under-appreciated reason for voting Trump has to do with Democrats and other Trump opponents. Since Trump first announced his candidacy for the White House back in 2015, it’s been imperative for Americans opposed to him on whatever grounds to come up with viable responses to the economic and social grievances that gave him a platform and a huge political base. Once he won the presidency, it became even more important for his adversaries to learn the right lessons.

Nothing could be clearer, however, than their refusal to get with a fundamentally new substantive program. As just indicated, conventional Republicans and conservatives capitalized on their role in impeachment politics to push their longstanding and increasingly outdated (given the president’s overwhelming popularity among Republican voters) agenda. As for Democrats and liberals, in conjunction with the outgoing Obama administration, the countless haters in the intelligence community and elsewhere in the permanent bureaucracy, and the establishment conservatives Trump needed to staff much of his administration, they concentrated on ousting an elected president they considered illegitimate and wasted more than three precious years of the nation’s time. And when they weren’t pushing a series of charges that deserve the titles “Russia Hoax” and “Ukraine Hoax,” the Democrats and liberals were embracing ever more extreme Left stances as scornful of working-class priorities as their defeated candidate’s description of many Trump voters as “deplorables.”

If the president is defeated this time around, why would any of these factions change? This

forecast leads a third and perhaps most important reason for voting Trump. As has been painfully obvious especially since George Floyd’s unacceptable death at the hands of Minneapolis police officers, the type of arrogance, sanctimony, and—more crucially—intolerance that had come to permeate Democratic, liberal, and progressive ranks has spread widely into Wall Street and the Big Business sector.

To all Americans devoted to representative and accountable government, and to the individual liberties and vigorous competition of ideas that’s their fundamental foundation, the results have been nothing less than terrifying. Along with higher education, the Mainstream Media, Big Tech, and the entertainment and sports industries, the nation’s corporate establishment now line up squarely behind the idea that pushing particular political, economic, social, and cultural ideas and suppressing others have become so paramount that schooling should turn into propaganda, news reporting should abandon even the goal of objectivity, companies should enforce party lines in the workplace and agitate for them in advertising and sponsorship practices, and that free expression itself needed a major rethink.

And oh yes: Bring on a government-run “Truth and Reconciliation Commission” to investigate—and maybe prosecute—crimes and other instances of “wrongdoing” by the president, by (any?) officials in his administration. For good measure, add every “politician,

executive, and media mogul whose greed and cowardice enabled” the Trump “catastrophe,”

as former Clinton administration Labor Secretary Robert Reich has demanded. Along with a Scarlet Letter for everyone who’s expressed any contrary opinion in the conventional or new media? Or in conversation with vigilant friends or family?

That Truth Commission idea is still pretty fringy. So far. But not too long ago, many of the developments described above were, too. And if Trump loses, there will be no major national institution with any inclination or power to resist this authoritarian tide.

It’s reasonable to suppose that more traditional beliefs about free expression are so deeply ingrained in the national character that eventually they’ll reassert themselves. Pure self-interest will probably help, too. In this vein, it was interesting to note that Walmart, one of the mega-companies that has proclaimed its belief that “Black Lives Matter,” and promised to spend $100 million on a “center for racial equality” just saw one of its Philadelphia stores ransacked by looters during the unrest that has followed a controversial police shooting.

But at best, tremendous damage can be done between now and “eventually.” At worst, the active backing of or acquiescence in this Woke agenda by America’s wealthiest, most influential forces could produce lasting harm to the nation’s life.

No doubt that if most Trump supporters had been asked back in 2015, “Of all the 300-plus million Americans, who would you like to become president?” their first answer wouldn’t have been “Donald J. Trump.” But no other national politician at that point displayed the gut-level awareness that nothing less than policy disruption was needed on many fronts, combined with the willingness to enter the arena and the ability to inspire mass support.

Nowadays, and possibly more important, he’s the only national leader willing and able to generate the kind of countervailing force needed not only to push back against Woke-ism, but to provide some semblance of the political pluralism indeed, diversity—required by representative, accountable government. If the price is more bombast and even downright vulgarity, and less regard for policy procedure and for the legitimate sensitivities of many genuinely aggrieved groups, than even many Trumpers would like to see, given American politics’ failure to date to provide a more reassuring disruptor, it’s sadly one that’s worth paying.