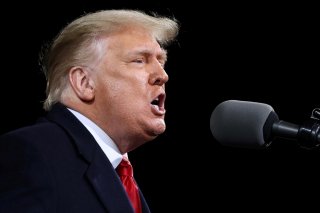 President Donald Trump continues to bungle the response to the coronavirus pandemic. Now that it has emerged that his administration declined Pfizer’s offer to sell more than 100 million doses of its vaccine earlier this year, Trump is scrambling to repair the damage. He apparently plans to issue an Executive Order demanding that Pfizer rescind its contracts with foreign countries. But the order is widely viewed as meaningless, including by his own administration officials. “I’m not concerned about our ability to buy vaccines to offer to all of the American public,” Gen. Paul Ostrowski, who heads logistic for Operation Warp Speed told the Washington Post. “It’s clear that Pfizer made plans with other countries. Many have been announced. We understand those pieces.”

Say what? The notion that America has enough vaccines is wholly unpersuasive. But it is of a piece with the administration’s overall mishandling of the pandemic. The result is that many more Americans will die.

The root of the chaos is Trump’s own refusal to take charge. Trump called for states to determine their own coronavirus vaccine distribution plans, a process that is supposed to prevent more Americans from contracting the deadly disease, as nearly 15 million people in the United States have already been infected. To speed up the vaccine distribution process, Trump authorized nearly $10 billion in taxpayer money to finance Operation Warp Speed, the federal government’s COVID-19 vaccine effort, and has a goal to produce and deliver 300 million doses of effective vaccines, with Americans in high-ranked priority groups to obtain one by January.

Drugmakers Pfizer and Moderna, both connected to Operation Warp Speed, applied to the Food and Drug Administration for emergency use authorizations, with their first injections to be made to the public as early as December, if approved. Both companies require extensive cold temperature storage measures.

Moderna can ascribe much of its vaccination progress to Operation Warp Speed, as the federal government has helped fund its COVID-19 vaccine endeavor, while, in contrast, Pfizer just received money to pay for the purchase of its vaccine.

The federal government, however, dictates how many doses of an emergency authorized vaccine would be sent to each state based on population, with states then disbursing it to local providers. Although Trump has granted states the power to decide specific distribution efforts for the vaccine—plans that had to be submitted to the federal government—“it’s clear the federal government is playing a significant role in the multi-pronged effort to develop and test vaccine candidates, manufacture them in large quantities and distribute them nationwide,” The Poynter Institute’s Miriam Valverde wrote.

But even with these submitted plans, which are heavily based on guidance provided by the Centers for Disease Control and Prevention (CDC), drafted state distribution plans are chaotic, jumbled, and lack needed federal funds. In September, the Department of Health and Human Services (HHS) declared it would provide $200 million to states and jurisdiction for coronavirus vaccine preparedness, with another $140 million expected in December, but CDC Director Robert Redfield admitted that an estimated $6 billion is needed to provide execution for a smooth distribution process.

While the Trump administration pumped billions of dollars into coronavirus vaccine development and research, there are lots of holes in this approach, as states have highlighted that they lack the needed doses and federal funds to effectively distribute the first batch of vaccines.

If the Pfizer vaccine is approved, New York will see 170,000 doses on Dec. 15, which will be reserved for health care workers in patient care settings, long-term care facility workers who regularly interact with residents, and most long-term care facility patients at risk in coronavirus hotspots. The same group will take second priority where there is a low dominance of the virus.

But New York Gov. Andrew Cuomo (D) has repeatedly pressed the federal government to provide additional funding, as “the states are broke” and need help to ensure a choreographed distribution process.

Public health officials in red states state they can’t move forward with logistics without more federal help, considering both Pfizer and Moderna’s vaccines must be stored at substantially below-zero degrees.

“We’ve gotten minimal (federal) financial support for personnel to pull this off,” Dr. Thomas Dobbs, state health director for Mississippi, said last month. “For us to be successful in this vaccination, additional money to pull it off and ongoing National Guard support are the critical elements.”

Governors and mayors want more of the vaccine.

Washington, D.C.’s Mayor Muriel Bowser (D) released a similar distribution framework to New York’s, with the help of public health officials and CDC guidance, ranking health care workers, other essential workers, and people at higher risk of severe coronavirus illness, including people 65 and older, as the top priority. The federal government, however, only granted 6,800 Pfizer doses to the District, which will first be distributed to health care workers, but the number of doses only covers less than 10 percent of that sector, as the region’s health care workforce surpasses 80,000 people.

The mayor wrote a letter to Operation Warp Speed, urging to reconsider its allotment to the nation’s capital.

In Maryland, Gov. Larry Hogan (R) and the state’s health officials also pivoted the first doses to frontline first responders and health care workers, particularly those caring for COVID-19 patients, but its first vaccine shipment will contain about 155,000—a figure that’ll cover less than 50 percent of frontline workers in the region—and is expected to arrive in mid-December.

“That’s a tiny fraction of what we need,” Hogan said last week at a press conference, referring to the first vaccine shipment.

State and local officials have called on Congress to roll out another stimulus package to avoid financial and logistical roadblocks in months ahead, but a partisan stalemate in negotiations forced talks to be stalled for months. A recent initiative by a bipartisan group of lawmakers is the most recent effort to revive them. Meanwhile, estimates are that up to 3,000 Americans a day may die through January.