Why Donald Trump Must Wage War with the Liberal Press 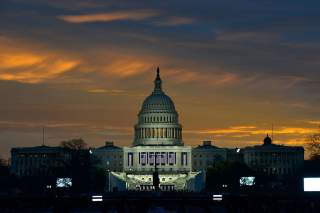 The fight between President Trump and the mainstream media is at heart a struggle for legitimacy. And the president is winning, hands down. After he called the press an “enemy of the American people” for promoting what he deems fake news, pundits reacted with outrage. But what do the people themselves think? They seem to be siding with the president. A new Wall Street Journal/NBC News survey finds that the majority of people believe that the media has been too critical of Trump (51 percent said so) and exaggerates his administration’s difficulties (said 53 percent).

Prestigious media outlets are shocked that the president would cast doubt on their legitimacy. His press secretary has even gone so far as to exclude sources like CNN, the BBC and the New York Times from informal daily briefings. The president devoted much of his remarks at the CPAC gathering in Washington, DC last week to elaborating on his view of the media—or, as critics saw it, redoubling his attacks. “There are some great reporters around,” he said. “They’re talented, they’re honest as the day is long. They’re great. But there are some terrible, dishonest people, and they do a tremendous disservice to our country and to our people.” He conceded no ground on the First Amendment: “It gives you the right and me the right to criticize fake news, and criticize it strongly.”

The press is worried not because its First Amendment liberties are under threat, however, but because the relationship of media to political power has suddenly changed. Politics, in the form of Trump, has responded to the crisis of legitimacy that afflicts all of our institutions. The media has not. Instead, it is protecting a role for itself that it long ago ceased to serve in the eyes of the public. The result is a mismatch—the media neither understands nor respects the president, while the president recognizes that public opinion places him under no obligation to treat the press with any deference.

The elite media and political leaders have long been as much colleagues as adversaries, a compromising relationship exemplified by the annual White House Correspondents Association dinner. In 2007, former New York Times op-ed columnist Frank Rich accurately wrote that the event, at which the president and press corps typically bask in mutual adoration, “illustrates how easily a propaganda-driven White House can enlist the Washington news media in its shows.” But times have changed. Journalists upset with President Trump this year threatened to boycott the event—only to have the president himself announce that he planned to skip the dinner. This elicited a new round of attacks on Trump, with the media insisting that he was breaching yet another sacred norm of the Washington scene by becoming the first president since Ronald Reagan to miss the dinner. President Trump evidently cannot be right no matter what he does: his presence is an offense to the sensibilities of journalists who cannot stomach his criticisms of their profession; but if he doesn’t attend, his absence is an affront to the special relationship between the press and president.

From World War II until now, politicians and the elite national media have lived in symbiosis, each side respecting and often reinforcing the other’s legitimacy. Prestige media is, after all, prestigious in part because its reporters get access to the president and other top officials. In turn, the prestige media lend their reputation for truth-telling and seriousness—their “gravitas”—to blessing the political order. Although Republican leaders invariably come in for harsher treatment than Democrats at the hands of the media, even a Republican like George W. Bush benefited from the aura of moderation and goodwill that the press bestows upon the political establishment in general. The press sets the standards that Republicans, no less than Democrats, must aspire to meet.

Yet from the start—from the moment he descended that escalator as he announced his campaign—Donald Trump has not been afforded any legitimacy by the press. Nor has he needed it: on the contrary, last year he succeeded in destroying the political establishment by rejecting the norms of the media establishment as well. He was mocked by the media from the beginning as first an unserious and extreme candidate, with no hope of winning his party’s nomination, let alone the White House. Instead of pleading to be taken seriously, however, Trump pursued a media strategy all his own, bypassing the gatekeepers of respectability. He used Twitter. He talked to insurgent right-wing media such as Breitbart, and took on Breitbart’s visionary ideologue, Steve Bannon, as one of his campaign chiefs. When Trump won the election, he owed nothing to the norms that the elite media had policed for generations.

To be sure, Trump benefited from the coverage he received, overwhelmingly negative though it was. Previously, the rules of the game were that a candidate should seek as much spotlight as possible while also making sure he stayed in the good graces of the press. Trump accepted the attention the media lavished to him, but he refused to grant any legitimacy to the press by bowing its norms. The media had in any event tried to place Trump at a singular handicap: even compared to other Republicans, he had much farther to go to prove to them that he was serious and respectable. He refused to play along, and he won anyway.

In effect, Trump established a new path to political legitimacy, one that involves winning elections without trying to pass the media’s tests. He knew he could command an audience of his own: he had done so since the 1980s, and more successfully than ever at the helm of The Apprentice in the past decade. Equally important to his success was the decades-long loss of legitimacy that the mainstream media has suffered. Conservatives have learned to distrust a media mainstream that runs to the left of the country as a whole. And as much of the country came to rue deindustralization, unending wars and immigration policies that favored only noncitizens and the rich, the editorial pages and news programs that promoted this globalist program forfeited any plausible claim to speak for middle America.

When a political establishment loses legitimacy, its crisis can be quickly and clearly resolved by an election. That the Bushes and Clintons had already lost the confidence of a critical mass of the public was made instantly obvious by Donald Trump’s primary and general-election victories. (Clinton’s popular-vote plurality hardly disproves the point: it merely means she could be governor of California if she wished.) But when other institutions undergo a similar loss of public esteem, the ancien regime can cling to power much longer. This is what leads to the gaping gulf between the mainstream media’s view of itself and the low opinion of the press held by at least half of the country. Sooner or later, however, through market forces or cultural osmosis, the media will undergo a change as great as politics has already undergone. The result will not necessarily be a more right-wing press, but it will almost certainly be one less globalist and liberal.

Trump and Bannon understand this, which is why they are not worried about offending the grand old mainstays of journalism. It’s why they include in the press pool right-wing blogs and websites without a scintilla of mainstream prestige. For the more the elite press whips itself into a fury at all the slights it suffers—or thinks it suffers—the more alienated it becomes from the public. Much of press expends more ink and pixels on its own relations with the White House than it does on, for example, trade policy.

The president gave his media critics an important clue as to what to watch out for in the future when he said at CPAC: “these groups are part of the large media corporations that have their own agenda, and it’s not your agenda, and it’s not the country’s agenda. It’s their own agenda.” The most serious threat the media faces is not coming from President Trump or his administration. It’s not coming from politics at all. It’s coming from a changing view of culture and economics on the left as well as the right. The elite media does not have to learn to like Trump, but if it wants to preserve anything of its postwar status, then it does have to adjust to the forces that elected him. Elite media has to leave behind the utopian norms of liberalism and report instead on the realities of class and nation.