Why Donald Trump Should Focus on Africa 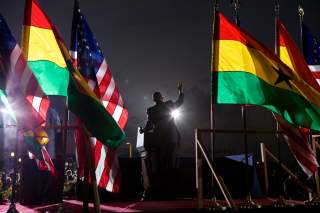 What’s a three-word foreign policy agenda President-elect Donald Trump can pursue that will create American jobs, reduce terrorism, challenge China and set him apart from the failings of his predecessor? Promote African development.

On the one hand, the world’s poorest continent is rife with socioeconomic problems that have paved the way for some lands to become hubs of international terrorism, posing a threat to their own populations as well as to distant countries, including the United States. Of the eighteen ISIS branches deemed fully operational by the National Counterterrorism Center, eight are in Africa. According to the latest edition of the Global Terrorism Index, the world’s deadliest terrorist group by sheer volume of lethality is not ISIS but the Nigerian Boko Haram. These clear and present threats were built on a continent’s suffering — from example, drought in Somalia and throughout East Africa and totalitarianism and corruption across the continent — breeding weak, failing and failed states that prove commodious to jihadist operations. Dictators in the mold of Zimbabwe’s Robert Mugabe continue to terrorize their own populations. And the Democratic Republic of Congo risks deteriorating into civil war should the head of state, Joseph Kabila, continue on his path to authoritarian rule. In a country rich in natural resources, the population remains destitute. These diverse factors help explain why the campaign to roll back terror on the continent is inseparable from African development needs.

On the other hand, some parts of Africa are among the world’s bright spots: According to the World Bank, six of the thirteen countries with the highest compound growth annually are on the continent. Among them, Rwanda provides an example of a country that has overcome one of the continent’s bloodiest conflicts in recent memory to empower women, fight corruption and attract international investment. Similar positive trends are visible in the democracies of Senegal, Cote d’Ivoire and even terror-plagued Nigeria — all of which are part of a larger pro-American bloc, stretching up to Morocco in the north, that stand with the United States in its struggle against terrorism. For Moroccan King Mohammed VI, the struggle against terrorism is inextricable from the challenge of developing the African continent. He has devised a holistic strategy to pursue both goals in tandem. And multinational bodies on the continent such as the African Union, after decades in a Cold War deep freeze, are newly invigorated as these like-minded African nations assert a greater leadership role within them.

One U.S. resident in particular made a meaningful contribution to mitigating some of these problems: George W. Bush. He is widely viewed on the continent as a hero: His signature Africa initiative, “the President’s Emergency Plan for AIDS Relief” (PEPFAR), saved millions of lives, and also drew praise on both sides of the American partisan divide. He launched the single greatest initiative to fight malaria on the continent to date, and, as a private citizen together with his wife Laura, has since been committed to the struggle against cancer in Africa.

By contrast, President Obama’s legacy has been more hot air than action. It began with a preachy speech in Ghana early in his presidency, in which he called on African youth to succeed where their parents had failed. Laden with identity politics, it married Obama’s personal narrative to the symbolic choice of the city of Accre — through which countless slaves passed en route to the Americas — to send a message that was as much about domestic American politics as the real challenges and promise of Africa.

His policies have since fallen flat: A U.S. Government initiative to power up the continent with electricity, promising thirty thousand megawatts of power, came up 26 thousand megawatts short. American commerce with the continent, via a free trade agreement dating back to the Clinton years, remains largely limited to the importation of natural resources from countries in which the extraction of those resources is itself a source of conflict — not in keeping with any responsible plan to develop the continent or fight terrorism. The President’s “Africa Youth Summit,” a large student exchange program, has not been successful in attracting members of the young political class in any African country, upon whom so much of the continent’s hopes are placed. Nor has the U.S.-Africa Leaders Summit, convened repeatedly and with great fanfare during the second half of Obama’s second term, shown tangible effect on relations among the participating countries.

China has meanwhile exploited this vacuum to become the dominant foreign player in Africa. It has invested more than $100 billion in infrastructure and manufacturing, become the continent’s largest trading partner and even begun to flex military muscle: Earlier this year, Chinese armed forces began the construction of a base in Djibouti, a stone’s throw from USAFRICOM’s Camp Lemonnier. It is the first time in modern history that China established a base beyond its “near-abroad.”

President-elect Trump has the opportunity to make a historic course correction, and to do so in a manner consistent with his administration’s stated goals. By renegotiating the U.S. African Growth and Opportunity Act, which was first initiated by the Clinton Administration, he can strengthen American exports, create new export-related jobs and foster development-oriented investment on the continent. By reforming U.S. humanitarian aid to Africa, he can cut considerable bureaucratic waste, effectively increasing assistance without upping the cost.

Meanwhile, Trump’s commitment to strengthening U.S. military capacities can and must include due attention to AFRICOM — both in terms of the resources it needs, and with respect to the need to partner with indigenous militaries, which should become the world’s first line of defense from terror based in Africa. All these measures — in benefiting Americans, winning goodwill among Africans and strengthening U.S. military capacities in the area — will in turn challenge China’s dominance of Africa, gaining America leverage as it moves to challenge Beijing in other ways.

Donald Trump will find that helping Africans achieve their dreams is a cause that smartly complements his plans and goals to benefit the United States.