Why Donald Trump Surged in the Polls (And Why It Matters) 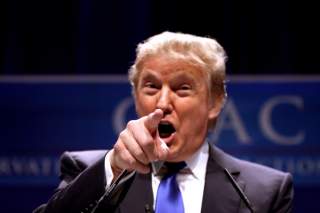 Donald Trump is not a pleasant man. He is egotistical, vain, bombastic, often mean-spirited. He revels in his financial superiority, which he conflates with human goodness. When he contorts his mouth into a kind of tube as he talks, you brace yourself for something outrageous—and it nearly always emerges as expected. His likability quotient, at least in terms of his public persona, is down somewhere in single digits.

And yet he has just taken hold of the American political system by the neck and doesn’t seem inclined to let go anytime soon. The political elites don’t know what to do or say about his sudden rise in the polls. The elite media default to their favorite hobby horse of political analysis—that any backlash to the current wave of immigration will simply destroy the Republican Party earlier than it would otherwise be destroyed, which is inevitable anyway so why bother?

The latest poll, by The Economist and YouGov, has Trump leading the field of GOP presidential candidates with 15 percent, four percentage points ahead of former Florida governor Jeb Bush. Though the YouGov polling methodology is sometimes criticized, this result matches other polls, including a recent North Carolina survey that has Trump at 16 percent, again four percentage points ahead of Bush. There is widespread speculation that Trump ultimately will initiate an independent presidential candidacy and shake up the country’s politics in the general election.

So here we have a hard-working, conventional Republican candidate in Jeb Bush, who has amassed a strong record as a serious politician over many years and has the benefit of a hallowed political name. And suddenly he finds himself second fiddle to an upstart industrialist with an acid tongue, no political record, and a penchant for offensive remarks.

First, let’s stipulate that Donald Trump is not going to be president. Neither is he going to get the Republican nomination. But he has a capacity to be a serious political spoiler in the looming presidential campaign, and he seems bent on spoiling as much of the political establishment as he can. And that explains his current standing. Large sectors of the American electorate are disgusted with the political establishment and will welcome any force that takes it on.

The highly emotional issue is, of course, immigration. Consider the state of play on this issue as the presidential campaign looms: Americans have nearly 12 million illegal immigrants in their midst, people who violated our laws to come here and violate them further every day that they stay. We have a president who granted many illegals legal status through a contorted series of executive actions, considered by many to have been unconstitutional. The governmental elite has been intermittently hapless and complacent in the face of this crisis, and large segments of the cultural elite welcome with great enthusiasm this turn of events, either because of humanitarian impulses or because they cherish the idea of a major political realignment in the country (or both).

And, quite aside from illegal immigration, many Americans see large waves of legal immigration as a threat to the country’s capacity of absorption and to its cultural heritage, since most of the immigrants come from regions far removed from the European homeland that spawned the American political and cultural identity.

The issue has four components. First, there are the economic implications—the impact of such widespread immigration on jobs and salaries. Second, there is the question of sovereignty—whether a nation that can’t control its borders is truly a self-respecting nation. Then there are the political implications—the growing concept that white Americans, declining in relative terms as a population segment, are going to be overwhelmed by people of color, who are expanding inexorably, in large measure because of immigration but also because of differential birthrates. Finally, there are the cultural implications—the idea, shared by many Americans, that the country’s cultural identity will erode progressively in the face of the immigration inundation.

Of these components, the economic implications get most of the attention. Sovereignty is largely ignored or pooh-poohed by the cultural and journalistic elites. But many Americans feel that a country that can’t control its borders is, to that extent, a diminished country; and that citizenship in such a country is of diminished value. As for the political implications, most of the media and the country’s political elites, including growing numbers of Republicans, view the outcome as now determined. Republicans will have to soften their immigration stance, they are told, if they want a sufficient share of the Hispanic vote to win elections. But of course this will simply result in growing numbers of people in the electorate with a disinclination to vote Republican.

But the most significant component—and the most emotional—is the cultural issue. For many Americans, the fate of America’s cultural identity is not a matter of mere frivolous concern, as many liberals argue. It is fundamental, which is why it unleashes strong emotions in many part of the country. And these emotions are heightened by the phenomenon of more recent immigrants being increasingly reluctant to shed their own distinctive elements of heritage and increasingly inclined to shun the concept of assimilation.

What we see here is a huge gap in the sensibilities of large numbers of voters and the sensibilities of the elites charged with setting the direction of the country. When the people no longer trust their elites, you can bet that serious political and societal disruption is on the horizon. In a democratic system such as ours, that will translate into rebel candidates connecting with populist voters.

And that’s what we see in the emergence of Donald Trump, coming forth in all his bombast and crudity to slam the elites for having allowed this immigration crisis to gain ever greater force in the American polity and drive a wedge through the nation. It may seems surprising that such a man could have any kind of impact on the early presidential race, for however brief a time, but viewed in the context of the broader immigration crisis it isn’t surprising at all.

But Trump is getting further traction with his vicious attacks on our era’s conventional politicians, particularly Bush and Hillary Clinton, as representing elites that are entirely vested in the nation’s current political and economic system and who will never break down the structures contributing so powerfully to the country’s current intertwined problems.

The slow-growth economy, the burgeoning inequality crisis, the growing global threat of Islamist extremism, America’s declining position in the world, expanding public debt, the looming threat of governmental unfunded liabilities—all these are products of the country’s current elites on Wall Street, in Washington, in public employee unions, in the mainstream media. They arose on the watch of the country’s post-Cold War politicians, most notably Hillary Clinton’s husband and Jeb Bush’s brother. Are these the people, many Americans are asking, to lead us out of the current political morass?

Trump says no. He says no with his usual crude rhetoric and with copious uses of words such as “stupid” and “stupidity” to bring home his point. But he’s getting his point across nonetheless because of the perceived failures of the nation’s elites.

He will fade in the primaries eventually, of course, though he will generate a lot of political pyrotechnics in the process. If he runs as an independent candidate in the general election, he will pull perhaps 12 percent of the vote, well below Ross Perot’s 19 percent in 1992 and even below George Wallace’s 14 percent in 1968. But in the meantime he will be speaking what many Americans will see as truth to entrenched power. And it is that entrenched power that is generating the concerns and angers that are fueling this unanticipated political whirlwind.