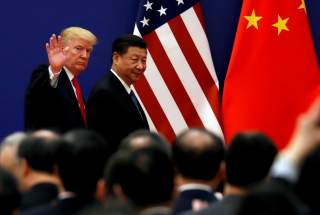 Ever since President Donald Trump started hiking tariffs on imports from China in the middle of last year, speculation has abounded that his main aim wasn't creating leverage for securing a favorable trade agreement with Beijing, but, rather, spurring a process of decoupling the two economies. As widely noted, disengagement represented a logical economic aim, given the president's conviction that China had been “raping” America on trade. And less commerce with China would reduce U.S. dependence on a country his administration warned was an increasingly powerful and aggressive strategic rival.

With Chinese negotiators back in Washington, DC for a last-ditch effort to keep months-long trade talks on track and prevent the steep tariff increases threatened by Mr. Trump last weekend, the end game sought by the president remains a puzzle. But a new set of official U.S. trade figures issued Thursday morning sent an unmistakable message about the evolution of the bilateral economic relationship: Disengagement is underway, by many measures it's accelerating, and the reasons point to further decoupling however the current and future bilateral negotiations turn out.

Some of the evidence came in the form of multi-year records revealed by the new data—which bring the story up through March. For example, the recently completely January-March quarter saw American goods imports from the People's Republic register their biggest quarterly drop (26.80 percent) on record. (These U.S. Census Bureau records go back to 1985.) That time span covers two garden variety recessions along with the nation's worst economic slump since the Great Depression—all periods when demand for all goods, domestic and especially foreign, drops sharply.

Seemingly less impressive, but still noteworthy, the $20.75 billion March U.S. merchandise trade deficit was the smallest monthly total since March 2014's $20.49 billion. (These and other figures are all presented in pre-inflation terms.)

The five-year difference, though, begins to suggest how much has changed between the two economies—and how the statistics need to be seen in context, not in isolation. For America's gross domestic product today is more than 23 percent larger than five years ago. If the trade deficit—taking into account the highly seasonal pattern U.S.-China commerce still follows (think “Christmas”)—has remained roughly the same, that strongly signals the partners are giving each other more space.

Growing estrangement is even more apparent from the shrinkage of two-way goods trade with China as a share of the total U.S. economy. For nearly twenty years after the People's Republic joined the World Trade Organization at the beginning of 2002, U.S. merchandise imports from and exports to China increased considerably faster than overall American economic growth. In 2002, the figure stood at 1.35 percent of GDP (gross domestic product), and by 2007, the year the Great Recession began, it had nearly doubled (to 2.66 percent).

For most of the current economic recovery (which began in mid-2009), two-way bilateral trade hovered between three and 3.40 percent of GDP, and during the last year of the Obama administration, stood at 3.09 percent. Donald Trump's first two years in office saw the share rise to 3.26 in 2017 and 3.24 percent in 2018, but the latter figure is decidedly misleading. Specifically, it's been inflated by what trade mavens call “tariff front-running”—importers scrambling to purchase goods from abroad (in this case, China) before levies raise their prices. This development becomes clear when the quarter-by-quarter numbers for 2018 are presented.

During the first quarter, two-way U.S.-China trade was actually down to 2.70 percent of the economy. But over the following two quarters, it jumped to 3.11 percent and 3.38 percent, as importers ramped up purchases to beat the tranches of tariffs on Chinese products imposed in July, August and September. Indeed, during the first three quarters of last year combined, U.S. goods imports from China soared by 20.53 percent—nearly eight times faster than the global total of 2.64 percent. And with even higher rates and broader tariff lists judged entirely likely by importers, two-way trade in the fourth quarter remained elevated, at 3.29 percent of GDP.

But as the Thursday statistics showed, during the January-March quarter of this year, China imports and exports plummeted all the way down to 2.51 percent of the economy—the lowest level since 2006's 2.47 percent. And leading the way was that 26.80 percent import quarterly import plunge.

Trade, however, doesn't represent the only U.S.-China economic activity whose profile has lowered recently. For example, since 2016, two-way foreign direct investment (purchases of so-called hard assets, like factories and real estate, as opposed to financial assets, like government bonds) has cratered by fully 70 percent. Most of the drop is due to an 80 percent decrease in Chinese investment in the United States, and the bulk of that decline came in 2018. But American direct investment in China peaked back in 2008, as the recession struck, hasn't come close to recovering since, and is also down slightly since 2012.

U.S.-China economic flows are still so great that they won't dry up completely. Nor should anyone expect the current unwinding to continue at its current pace. After all, China still boasts advantages in many manufacturing industries (which dominate bilateral trade) sure to sustain sales to American households and businesses. Chief among them are the scale of existing production complexes in China and the efficiencies that result, along with the wide range of cost-reducing subsidies these sectors receive from Beijing. Further, China can't expect to find foreign markets capable of replacing its sales to the United States, and therefore supporting its own ability to grow and maintain the employment levels vital for political stability. Nor will American businesses be able to totally blow off the enormous Chinese market and its own still-impressive growth.

But the engines of disengagement seem here to stay as well. On the American side, they include the mounting frustration among corporate and political leaders with longstanding Chinese trade and investment barriers that President Xi Jinping has raised further; increasing pressures on U.S. businesses to transfer their most valuable intellectual property to Chinese partners; continued outright Chinese theft of these technological and business secrets when extortion doesn't work; and surging Chinese technological progress that keeps translating into a stronger military and greater threats to American interests both in the Asia-Pacific region and around the world.

The Chinese side's decoupling impulses are weaker because Beijing still urgently needs both American trade markets and technology. But the technology dependence clearly rankles, as evidenced by China's determination to develop its own fully competitive advanced industries by hook or by crook.

And if its global Belt and Road infrastructure-financing and building program achieves lasting successes, China will have nurtured significant new customers for its exports.

Nonetheless, the days are over when the United States—or at least its political and business leaders—saw mushrooming commerce with China as an expressway to greater national prosperity and higher profits, not to mention a powerful contributor to global well-being, security, and stability, and a means of democratizing China itself. With all these hopes dashed, Washington and the American business community will find ample reasons to keep looking for exits.