Why Germany Should Get the Bomb 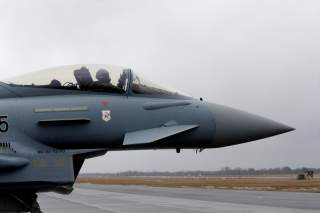 Considering the politics of Donald Trump, Germany can no longer rely on the protection of the United States. According to political scientist Christian Hacke, Berlin has no other choice: Germany must become a nuclear power.

The U.S. president’s semi-authoritarian attitude and his willingness to make friends with the enemies of democracy has exacerbated doubts about whether the West is at risk of breaking up.

President Donald Trump treats once valued allies with scorn and castigates them in public. Under the battle cry “America first,” allies have suddenly become a burden. President Trump is trampling on the core Western values and interests and in so doing, he is gambling away the role of the United States as the leading power of the West. Instead he is chumming up with dictators and squandering America’s reputation as a responsible global power. He is giving up crucial influence, which could lead to alarming shifts of power to the detriment of the free world.

A look in the history books, such as the period between the two world wars, shows that isolationism and protectionism are typical U.S. characteristics. In this respect, the liberal internationalism pursued by the United States during the Cold War can be the seen as an aberration. Accordingly, Trump is very much in tune with popular traditions. So, in a sense what he is doing is nothing new, but he has revolutionized U.S. foreign policy like no other president since the Second World War: friends become enemies while the red carpet is being rolled out to the enemies of democracy.

Trump represents an America that has always been there, but that we Europeans and especially we Germans have never known and whose very existence we have deliberately suppressed: This America prefers to keep the world at arm’s length and feels most comfortable without the burden of international responsibility.

This rapid change in U.S. foreign policy is hitting allies, especially Germany, hard. For more than sixty years, the Federal Republic was a favored European ally, but today it holds the dubious honor of being Trump’s personal enemy number one. Such an about-face is unprecedented in the modern history of America. Germany policy explains why many Germans still seem to be in shock. Unsurprisingly, Trump’s incessant degradations and constant haranguing of Germany have led to a correspondingly angry backlash.

The chancellor handles Trump’s verbal abuse calmly; however, Germany’s moralizing arrogance is no substitute for a viable political strategy. In this case Germany is clearly sitting at the shorter end of the lever, since it needs the United States more than vice versa. The U.S. president is right when he complains about decades of lackluster German defense spending. Thus, is it really so surprising that Washington now regards Berlin as an ungrateful freeloader, who refuses to show military solidarity when it gets dangerous?

Germany is not just being criticized for its inadequate defense contribution within the NATO framework, but also because of the dire state of the German Bundeswehr. Nothing flies, nothing floats, and nothing runs in the German military. The German armed forces appear incapable of defending the country (much less anyone else) and reforms remain half-hearted. Yet, at the same time, Germany’s political elites do not just content themselves with working toward non-proliferation, but emphatically support the withdrawal of U.S. nuclear weapons from Germany and the Global Zero campaign.

This mirrors the public’s uninterest in defense policy and reflects a provincial sentiment that regards peace as the natural state of world politics. The occurrence of international crises is met by momentary alarmism, but soon enough public sentiment soon returns to indifference. Thus, Berlin’s strategy can best be described as “close your eyes and hope for the best.”

Yet, basing Germany’s security policy on hope alone could prove fatal—history offers numerous examples! But no, in Germany—the island of the blessed—when it comes to security one wins votes by engaging in naïve idealism. Not just to satisfy the pacifist and increasingly anti-American mood of the general population, but to stoke it even further, now that gets you the votes! Never mind that this puts Germany’s security at risk and fosters anti-Americanism.

Donald Trump’s narcissistic behavior and abrasive style plays right into the hands of this development. However, in their outrage they overlook that in the United States, Trump’s politics have been better received than many Germans would care to admit.

His populist diplomacy based on the pattern of pursuing “friendship with powerful authoritarian leaders and distancing America from its useless allies” is more popular in the United States than many Europeans suspect. The American people are politically exhausted after seventeen years of unsuccessful anti-terror war. However, this perspective is lost in the one-sided Trump bashing taking place in Germany. Particularly concerning is that the dramatic security policy implications this has for Germany are being completely disregarded.

After all, does anyone still believe that an inadequate security policy and Trump bashing are appropriate in times of revolutionary changes in the world? Instead, should we not be concerned that Germany’s nuclear naiveté is playing right into Trump’s Germany bashing, further weakening the United States nuclear deterrence guarantee?

1. First of all, Berlin should try to accommodate the United States in terms of its security policy: Germany’s insufficient defense spending must be increased quickly and substantially. The half-hearted approach we have seen so far is not enough.

2. Germany must also improve the quality of its armed forces and, if necessary, modernize them.

3. Germany must cultivate an ambitious strategic culture; to do this Berlin must develop the will and the ability to think and to act in military-strategic terms. The emergence of new challenges has made the ability to think in geopolitical terms, such as how to safeguard Germany’s trade interests, much more pressing. A national defense policy, which is based on the transatlantic alliance but does not hide behind it, has become imperative.

4. The emerging nuclear threats of the twenty-first century should not be trivialized as relics of the Cold War but must be resolved with Germany’s active and constructive participation.

5. Germany’s new role as enemy number one of the United States president forces it to radically reconsider it security policy.

In this delicate security situation, the following alternatives are available to Germany:

1. Berlin continues to muddle through and hope for better times after Trump is gone. However, if Germany chooses to follow this path the U.S. security guarantee will become less and less credible by the day. President Trump’s recent statements regarding NATO member Montenegro have further reinforced these doubts. Particularly Germany, as President Trump’s new enemy, can no longer count on U.S. support. This forces us into a disturbing conclusion: for the first time since 1949, the Federal Republic of Germany is without the protection of the U.S. nuclear shield. Accordingly, in case of a serious crisis, Germany would be defenseless! Yet, who talks about this issue? Who presents a well-reasoned argument about possible consequences? Clearly, the German security debate is in need of more intellectual and material contributions. In order to again convince the United States that both NATO, as well as its member state Germany, are worth defending, Germany must think and act, especially in regard to nuclear deterrence, with a view toward the future.

2. As a replacement for an increasingly uncertain U.S. nuclear guarantee, a European nuclear force is now being discussed in Berlin. Either a collaborative European nuclear power is to be created, or France and/or Britain are supposed to guarantee continued nuclear deterrence for Germany. Germany could finance such a European nuclear power by agreeing to co-finance British and/or French nuclear weapons projects if, in return, the two powers agree to guarantee Germany’s safety with an extended nuclear deterrent. But is such a proposal convincing?

Europe has now been waiting in vain for a common defense policy for seventy years. Even in the future, differing national interests will ensure that such a policy will remain elusive, particularly, since neither France nor Great Britain is inclined to guarantee Germany’s security with their respective (national) nuclear arsenals. Accordingly, a French or British nuclear shield most likely does not present a viable alternative to assure Germany’s safety. After all, Charles de Gaulle’s maxim of nuclear power being “hard to share” does not just apply to France. In this, too, it seems Berlin is chasing an illusion.

3. Since the U.S. nuclear guarantee has become increasingly doubtful and a common European deterrent does not seem to be forthcoming, only one possible conclusion can be drawn: in a serious crisis the only one Germany can truly rely on is itself. After all, extended deterrence has one major weakness: under the current circumstances, non-nuclear allies like Germany can no longer be certain that an allied nuclear power would still be willing to guarantee their safety in the event of a crisis. Thus, our attention turns to the elephant in the room, which nobody in Germany wants to acknowledge: What about Germany as a nuclear power?

In the past, Germany was able to eschew weapons of mass destruction because its safety was guaranteed by others, a situation which today seems rather more dubious. Consequently, the principle of “Pacta sunt servanda” must now be followed by “Rebus sic stantibus.” Logically, the emergence of new crises and structural changes must now also lead to a review of the cornerstones of German defense policy.