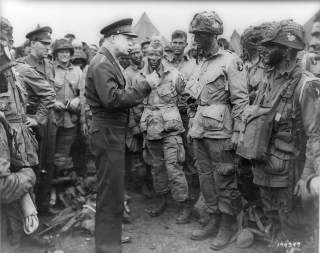 “In God We Trust.” It’s something President Dwight Eisenhower wanted every American to remember, and so the saying has been stamped on our currency ever since. Ike’s initiative was the most overt and enduring expression of his determination to keep religion squarely in the public square. He believed that faith was a crucial instrument of national power—as important as pin-striped diplomats, the Pentagon and the New York Stock Exchange.

How Ike blended religion and politics is the focus of a new book, The Soul of an American President, by Alan Sears and Craig Osten. The authors head the Alliance Defending Freedom, a Christian nonprofit organization which advocates for religious freedom. That said, they approach Ike’s faith journey as objective scholars, with seriousness and thoroughness. And that approach has produced a book that is truly revelatory.

Most presidential biographies are secular, rarely touching on the role of faith in presidential leadership. Ike’s religiosity, in particular, is one of the least studied aspects of his stint as commander in chief. Given how often the president invoked God in his public discourse, neglecting the role of religion makes no more sense than forgetting that Ike had been the Supreme Allied Commander in Europe during World War II.

Like many military officers of his generation, Ike kept his politics and his religion to himself. When the Cold War started to get hot, Ike determined he had to transform himself into a different leader—one to match the times and the mission. That started with picking a political party and running for the presidency.

As president, Ike believed the nation needed a calm, steady leader, neither an apologist indifferent to the Soviet threat nor a hell-raising militarist that would lead America into another war—so that was the public persona he was determined to adopt.

Critics often wrongly derided Ike’s no-drama style as a sleepy, cardigan-wearing grandpa snoozing in the West Wing or distracted by weekend golf outings. They missed the “hidden hand,” the activist president who commanded the Washington bureaucracy like an Army division.

But the new, low-key Ike was very public about the importance of faith in governing. After winning the election, he accepted baptism, joined a Presbyterian congregation, and started going to church on Sundays. He also gave faith a prominent role when explaining his policies—from facing off against Moscow to guiding desegregation over the objection of Southern governors—to the American people.

Sears and Osten illuminate the two reasons why Eisenhower turned to God in such a public manner.

For one, Ike didn’t think he could govern without faith. The challenges facing the nation were too great, he felt, to be overcome using his judgment alone. He needed the guidance of a higher power.

For another, Eisenhower believed faith was a crucial instrument for winning the Cold War. In his view, write Sears and Osten, America’s power “rested upon the belief in a higher power as the source of human dignity and freedom… America’s true advantage was not its material and technological advancements but its faith, or as he put it, America’s ‘spiritual weapons.’”

While Sears and Osten offer real insights into history, this book is equally useful for contemplating how to handle the world in which we live today.

No one would dispute Americans are becoming more secular. More, in fact, have reinterpreted the promise of freedom of religion as freedom from religion, seeking to evict God from the public square altogether. That, of course, may change. American religiosity has never followed a straight line. Throughout our history, there have been times when Americans embraced religion less, and times when they embraced it more. The age of Ike was one of the latter. The pendulum may well swing again.

It can be argued that, for America to thrive in today’s world, faith needs to make a comeback. In a hyper-competitive global environment, it is essential to know who you are, what you are competing for, and your real competitive advantages.

Arguably, we are entering an age of intense civilizational struggle. I’m not talking about a clash of religions or races such as Samuel Huntington suggests. Rather, I’m talking about a contest between contrasting foundational beliefs on how to treat human freedom and practice governance.

Faith is part of we are. When we lose it, we lose the glue, the confidence and cohesion of what we are fighting for.  Faith is more important than ever because it is part of the deep contrast with those we are competing against.

China actively seeks to abolish the human spirit, the antithesis of the nurturing spirit of an authentic civilization.

Putin, on the other hand, subordinates orthodox religion to the service of the state. Rather than faith guiding governance, for Putin faith is an instrument of control. Ditto for the dudes in Iran and all of Al Qaeda’s ilk. There is nothing authentic about that except authentic authoritarianism.

In contrast, one distinguishing feature that America and its civilizational partners share in common is a belief in human freedom.

President Donald Trump is no Ike, and certainly no choir boy. But on the role of faith in foreign policy, Trump gets it. There is a reason why this administration has elevated advocacy for freedom of religion in American foreign policy: it distinguishes our brand from the other.

And Trump also believes, like Ike, that our providence and prosperity come from God.

During the Cold War, Americans liked Ike. If Ike were around today, then he might have liked Trump. Well, maybe not the tweeting. Still, Ike would have prayed for our current president’s success in keeping America a place where In God We Trust.