Why Harry and Meghan Should Stop Whining 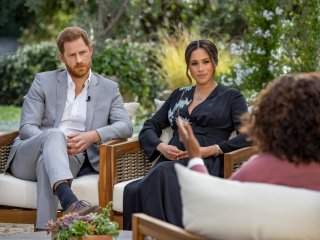 The curious thing about the Meghan Markle interview was the crying. Lachrymosity in private might be a show of distress, an appeal to power or providence and others, or even a mating strategy, but in public, it turns to a weapon. There is no response to crying. You cannot tell a weepy woman, much less a middle-class woman who married an actual manor born, in public, that she’s talking unsubstantiated rot.

There is no evidence to most of her fantastic claims and anecdotes, and she knows that the Royal family is at a disadvantage, as no one will be allowed tweetstorms and the like, as that goes against the social code of the aristocracy. She appeals especially to the middle class who are privileged enough to work from home and experience first-world problems. And her crying, much like some female British parliamentarians, are a weapon that is authoritarian and manipulative in nature. Ideally, weakness and demand for respect shouldn’t go hand in hand.

In that one act, Markle did act like a real privileged princess, the conduct of which is actively barred under modern constitutional aristocratic codes. Aristocratic social codes are usually stifling for a reason. Aristocrats, at least for those who still believe in that sort of thing, are supposed to be a class above, leaders of men, showing indifferent fortitude in the face of adversity. Not make a fuss of everything. Captain Lawrence Oates who sacrificed his life to save his comrades and food in the doomed Antarctica expedition, simply walked out of his tent to a polar storm. His comrades knew he was sacrificing his life to save resources. The captain of Titanic ordered his men to “be British, die British.” The British monarchy, since the Georgian age at least is supposed to be “above it all,” not partaking in daily politics, which includes emotional outbursts about anything. This is a living symbol of fortitude and the state, especially evident during the days of the Blitz, when the Queen Mother, when asked to move to Canada, famously said that the daughters (the current Queen and her sister) will not live without her mother, her mother will never leave her husband, and the King will never leave his country. British royalty, compared to other elites, compulsorily serve in the armed forces. Duty without distress is the key.

And yet, the clash of classes and culture was not only evident—it was also generational and predictable. As Louise Perry wrote, British culture is facing

a conflict between sets of virtues that can be usefully labeled “bourgeois” and “bohemian”. The former are named for their (generally derisive) association with the bourgeoisie, but they are by no means the preserve of the middle classes. These are the virtues that come with traditional respectability: stoicism, humility, industriousness, punctuality, obedience, tidiness and a sense of duty. Set against these are the bohemian virtues, which include creativity, imagination, tolerance, open-mindedness, independence, sensitivity, and (above all) authenticity.

The monarchy as an institution is unique, and better suited historically for Britain. Constitutional monarchies (as opposed to authoritarian monarchies like Saudi Arabia) are economically better in performance than republics, they pay back more than they receive, they are overall better governed, their judicial system offers better justice under the common law, and they form a bridge between the symbols of the state and the general public. You cannot attend the wedding of the Great Seal of the United States, or the Ashoka Chakra of the Republic of India. Going to war for God, Queen, and Country, simply sounds rhetorically better as a rallying cry.

What matters is, however, the British public. And to it, just as during the times of Diana, there is no greater chasm between what Elizabeth Regina, a veteran of the last great conflict known to humanity, a symbol of calm stoic perseverance, the representative of the best of the empire and Commonweal, personifies versus the fashionable Hollywood elitism of Harry and Megs. Ask yourself, just in a hypothetical scenario, who would you prefer to call your better? Someone who never shows fear or weakness, or someone who demands respect because of hurt feelings?

The Markle interview is the same as the middle-class worldview that currently rules the West, that self-pity and emotions are healing while duty, stoicism, and restraint are harming. But royalty isn’t supposed to be a celebrity, much less, from a former d-lister, who somehow managed to grab a dolt of a prince. And that’s because we can call the prince doltish, in the currently decided system, as they are “above it all.” That’s what makes an aristocracy supposedly better, their stoicism. Thin-skinned d-lister celebs moaning to billionaire TV personalities about the world being tough is the exact opposite of that. No one thinks celebs are our “better.”

And that is why I think everyone should just relax about “the interview.” Harry and Meghan may be a royal pain, but the monarchy isn’t going anywhere. Chin up.

Sumantra Maitra is a Doctoral Scholar at the University of Nottingham, and a Non-resident Fellow at the James G. Martin Center.

The Monarchy's Comeback: the Royal Wedding