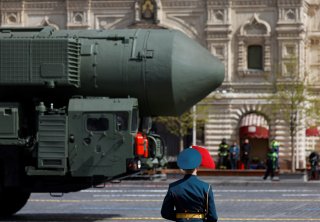 Will Russian president Vladimir Putin use nuclear weapons in his war against Ukraine? Putin’s constant nuclear threats have made this one of the most critical questions hovering over the entire conflict. Are the threats a bluff designed to deter NATO efforts to support Ukraine, or are they serious warnings not to corner Putin that Ukraine and the West must heed? If Putin is truly willing to use nuclear weapons, then given the major political and military defeats he has endured, the real question may be why hasn’t Putin already ordered their use in Ukraine. The answer may lie in America’s own experiences in the Korean War.

Even before the invasion, Putin employed nuclear threats to deter an unlikely NATO intervention in what he believed would be a quick and easy victory. Russia’s defeats at Kyiv and Kharkiv and Ukraine’s recent offensives into territories annexed by Russia—resulting in massive Russian casualties and a badly tarnished global image—have intensified fears that Putin may authorize a tactical nuclear attack to stave off a battlefield defeat. As if on cue, Putin immediately began threatening to use “all weapon systems available to us” to achieve victory. In response, the Biden administration has conveyed both publicly and privately that a tactical nuclear strike would result in a catastrophic U.S. response and risk global “Armageddon.”

Prior to the war, however, the type of setbacks Putin has already endured—on the battlefield, at home, and internationally—would themselves have been grounds for nuclear retaliation. These defeats have left Putin a shadow of his former self, with even his once-cowed allies inflicting indignities not thought possible just a year ago. With Putin’s legacy in ruins, his army in disarray, and his country in upheaval because of the disastrous mobilization, analysts need to consider why Putin hasn’t decided to use nuclear weapons. The likely answer, as the United States learned during the Cold War, is that employing nuclear weapons on the battlefield is far more difficult than it first appears.

The often-examined Cold War crises over Cuba, Berlin, and Taiwan are the most famous examples of U.S.-Soviet nuclear brinkmanship. However, none of these instances reflect the current strategic predicament of a nuclear-armed Russia facing a decisive defeat in a conventional war against a non-nuclear state. Nor do the Vietnam War or the experiences of the United States and the Soviet Union in Afghanistan relate, as both powers withdrew in response to political exhaustion rather than outright military defeat.

There is one largely forgotten historical case that provides a striking parallel to the current conflict: the first year of the Korean War. From June 1950 to March 1951, the United States engaged two non-nuclear powers, China and North Korea, along a rapidly shifting battlefront where American forces faced decisive defeat on several occasions and the Truman administration strongly considered using nuclear weapons to stave off disaster—but didn’t.

On June 25, 1950, North Korea launched a massive assault across the 38th parallel, routing the poorly prepared South Korean military en route to uniting the peninsula. President Harry Truman sent U.S. troops stationed in Japan to the Korean Peninsula to support the disintegrating South Korean Army while also preparing to use nuclear weapons. U.S. and South Korean forces stopped the North Korean advance at the Pusan perimeter, enabling Gen. Douglas MacArthur’s daring September landing at Inchon, which triggered the rout of the North Korean military. The United States and its allies pursued the shattered North Korean army up to the Yalu River to unite the peninsula under the government in Seoul.

On November 25, 1950, the Chinese launched a massive offensive that overwhelmed the U.S.-led forces, driving them back down the Korean Peninsula deep inside South Korean territory. Panicked U.S. leaders feared a “Korean Dunkirk” compelling the United States to abandon Korea as Britain did France in 1940, ruining American claims to global leadership at the outset of the Cold War. In response, Truman declared a national emergency, instituted a large-scale military mobilization, and ordered the first permanent peacetime deployment of American forces to Europe. Yet the Truman administration resisted enormous pressure to use its nuclear capability to stave off defeat.

The reason had little to do with either taboos or moral repugnance against the use of nuclear weapons; Truman had approved the atomic bombings of Hiroshima and Nagasaki only five years earlier. Instead, this decision reflected significant doubts regarding their utility in Korea, misgivings that echo criticisms of their usefulness in Ukraine today, and concerns that an ineffective nuclear attack in Korea would badly degrade America’s strategic position around the world. Despite their destructive power, officials feared that nuclear weapons would fail to stop the Chinese advance, potentially undermining deterrence in Europe, as nuclear weapons were vital to any hopes of stopping a Soviet invasion. U.S. planners anticipated that a Soviet attack would follow the same trajectory as the Chinese invasion—rapid enemy advances against retreating U.S. and allied armies. Would these weapons lose their credibility to deter war in Europe should they fail to stem the tide in Korea?

There were several reasons for these fears. First, the United States had yet to develop small tactical nuclear weapons designed for the battlefield. This meant that the United States would have to rely on larger weapons from its strategic stockpile that were already committed to targeting Soviet cities and nuclear and conventional forces. In 1950, the American stockpile totaled only 369 atomic bombs, growing to 640 weapons by 1951. Though rapidly growing, the U.S. arsenal was still small compared to the swiftly increasing number of targets it was tasked to destroy.

Third, the Soviet atomic detonation in August 1949 led to increased fears of World War III. The war in Korea had stretched U.S. resources so thin that many worried the United States would not be able to respond to a Soviet attack on Western Europe. In fact, the United States committed seven of its existing ten Army divisions to Korea in June of 1950, leaving little for Europe’s defense. To redress these critical weaknesses, in September of 1950, Truman approved NSC 68/2, which recommended a mobilization to dramatically increase the size of the military.

Finally, American planners had a devastating alternative to nuclear use: firebombing. The U.S. Air Force relied heavily on firebombs from the first days of the war until its conclusion, devastating the peninsula. By 1953, Korea’s major cities were hardly distinguishable from Hiroshima and Nagasaki.

The Korean front stabilized in the spring of 1951, yet considerations of nuclear use continued as negotiations to end the war floundered for two years. The continuation of the war cost tens of thousands of additional U.S. casualties and drained substantial resources from the mobilization, posing significant strategic risks to America’s global position. During the 1952 Presidential campaign, candidate Dwight Eisenhower famously threatened to use nuclear weapons should the negotiations fail.

Russia faces no shortage of nuclear weapons. However, it does have to consider major questions regarding their battlefield utility. Ukrainian forces are spread out in small, widely dispersed units that do not provide impactful targets for the isolated use of tactical nuclear weapons, making their deployment “pointless,” according to military historian Lawrence Freedman. The United States faced similar concerns during the Cold War when NATO realized it needed to use hundreds of tactical nuclear weapons to defeat a Soviet invasion of Western Europe, which would leave West Germany a radiated ruin. Similarly, Colin Powell wrote that when planning Operation Desert Storm, the Joint Chiefs examined the possibility of using tactical nuclear weapons against Saddam Hussein’s forces in Kuwait and were shocked to discover that it would require “a considerable number of small tactical nuclear weapons” to destroy a single armored division.

Certainly, Russian military planners have already war-gamed nuclear use in Ukraine, likely discovering that Putin would similarly have to authorize dozens of nuclear strikes to impact the battlefield, an attack hardly distinguishable from launching a large-scale nuclear war against Ukraine. The onslaught would not only cause horrific losses in Ukraine, but, as demonstrated by the Chernobyl nuclear meltdown, would spread radiation throughout Eastern Europe and Russia. It would also likely result in devastating NATO airstrikes against Russian forces, threatening further, rapid escalation. This does not mean that Putin would be averse to using nuclear weapons simply as weapons of terror. However, the costs would be so high it is questionable whether he could survive the global outrage. Therefore, Putin’s willingness to use nuclear weapons is dependent on whether the deterrent effect of his threats is less than, equal to, or greater than the impact of nuclear use on the battlefield, minus the devastating international backlash that would possibly include a combined arms operation between NATO airpower and the Ukrainian army.