Why Humanitarian Aid Workers Are Under Attack 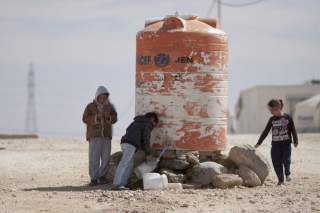 Military attacks against humanitarian workers and facilities have repeatedly been in the news in the past months; from Afghanistan, to Syria, to South Sudan, among others. Last month, international news outlets extensively reported on the deliberate and brutal attack against foreigners and aid workers that took place in Juba, South Sudan, in the context of the bloody conflict that has engulfed the country since late 2013.

The account raises a number of important questions, starting with why UN peacekeeping forces, stationed near the location where the attack took place, failed to intervene.

More broadly, this episode highlights a worrisome trend: the rise in the deliberate targeting of humanitarian workers. In 2000 there were roughly ninety-one registered cases of personnel being injured, killed or kidnapped. That number has more than quadrupled ever since—an increase that cannot be explained simply by pointing out the rise in the total numbers of personnel employed in the humanitarian field. In 2015 alone, 287 aid workers were victims of “major attacks,” with over a hundred casualties.

There is no denying that working in war zones and in fragile or unstable post-war societies carries significant risk. Yet the growing trend of attacks against humanitarian professionals should not be downplayed as occupational hazards of a dangerous job. Nor should this discussion be confined to sector-specific debates on how to improve security protocols and increase the humanitarian sector’s overall commitment to the safety and well-being of its workers. It is not that these debates are unimportant. They are. Rather, the increasing risks and attacks against humanitarian professionals should be seen as symptoms of the larger malaise of the international humanitarian sector as a whole.

Put simply, workers on the ground, both local and foreign, are increasingly targeted because of who they are and what they have come to do. This reveals something disturbing: the gradual erosion of the “humanitarian space”—the perhaps fictional yet vital notion of a “safe space” that should allow those providing emergency assistance and relief to operate amid ongoing conflicts. If this safe space is not preserved and protected, providing assistance will become more difficult. This could have devastating consequences for the international humanitarian system as a whole and, more importantly, for the millions of civilians trapped in conflict-zones and dependent on humanitarian assistance.

Syria is perhaps the most vivid contemporary example of what happens when warring parties treat humanitarian access as a weapon of war and begin to see humanitarian staff as legitimate targets. It is a profoundly disheartening and tragic landscape: one where the delivery of basic assistance is granted or denied according to war logics, leaving large numbers of civilians under siege and lacking food and water. Doctors hoping to mitigate the impact of the war are seen as enemies and—in plain disregard for even the most basic international humanitarian law standards—are targeted, time and time again. But Syria is not an isolated case. South Sudan’s latest attack builds on previous cases of aid diversion, manipulation and open disregard for the notion of a humanitarian space.

What could account for this worrisome trend? The reasons are numerous and complex, but perhaps it worth reflecting on at least three important points.

First, intervening in prolonged and deeply politicized internal conflicts creates complex dilemmas. When warring parties fight over controlling the civilian population and are deeply committed to destroying and denying their enemies’ ability to govern and maintain territorial control, granting and withholding humanitarian access and assistance become de facto weapons. The international humanitarian sector needs to reflect on how to better cope with these dynamics, from the issue of negotiating and engaging with multiple parties, including rebel factions, to the issue of how to balance these engagements with governments and non-state actors with the core need to preserve neutrality and impartiality.

Second, these trends at play on the battlefield are reinforced time and time again when they are met with impunity and, at times, complacency from the international community. When the Syrian regime systematically targets humanitarian facilities and politicizes aid, yet is punished solely by words of condemnations, this sets a disheartening precedent. Coordination of assistance with governments that have abysmal human rights records can prevent significant pressure on those regimes, giving them a pass on issues ranging from civilian protection to upholding basic international humanitarian law principles. This undermines the overall humanitarian system. And when peacekeeping forces tasked with civilian protection fail to intervene when humanitarian workers are under attack, the message is that perpetrators can get away with it. Needless to say, impunity and complacency only increase, rather than lessen, the chances of these episodes recurring.

Finally, it is important to reflect on how the legacy of the past decade of external military interventions, followed by counter-insurgency campaigns, “state-building” processes, “stabilization” operations and “civil-military partnerships” has at times dangerously muddled up the lines between principled and neutral humanitarian work and politics. What is more, time and again the humanitarian sector at large has been dispatched to ameliorate deeply complex conflicts that, ultimately, need a political solution. Protracted political crises caused by foreign policy failures or international inaction—or a combination of the two—continue to be outsourced and derogated to an ever more cash-stripped and overstretched humanitarian sector. Eventually the entire edifice will collapse.

The relatively apathetic reactions by the international community are a symptom of a much larger problem. Much needs to change if we want these attacks not to become frequent occurrences and if we want the notion of humanitarian space to be protected and respected, allowing people in need to be reached regardless of which party controls the area where they are located. The first step is in this direction is for the international community to step up and put humanitarian access again at the top of its priorities. It must go beyond words of condemnations and really strive to hold perpetrators—governments and rebels alike—accountable.

Dr Benedetta Berti is a fellow at the Institute for National Security Studies (INSS), a TED Senior Fellow, a Robert A. Fox Fellow at the Foreign Policy Research Institute (FPRI) and a Fellow at the Modern War Institute at West Point.