Why Hybrid Terrorism Has Come to Indian-Administered Kashmir 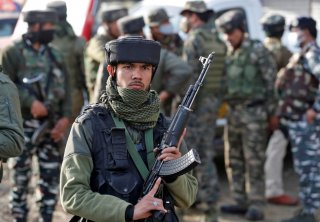 October is proving to be a bad month for the non-Muslim minorities and non-natives of Indian-administered Kashmir. Just this month, some eleven civilians have been killed at point-blank range by unknown assailants. So far, the victims have been schoolteachers, street vendors, laborers, and tradesmen. During this same period, close to a dozen Indian military personnel serving in this restive region have been gunned down by these unknown attackers.

Indian authorities have described these attacks as acts of terrorism, but questions remain. Who are these terrorists? Why are they engaged in these targeted killings? Why have things taken such a violent turn in this part of India? Is there a way out of this militancy?

A History of Selective Killing

The religious composition of Indian-administered Kashmir is almost homogenous. Muslims predominate this restive region. The evenness of this Islamic profile is only occasionally broken by the presence of smaller numbers of Hindu and Sikh inhabitants who have lived there just as long as their Muslim counterparts. The region is also home to a few thousand itinerant workers from the rest of India. Of late, however, this demographically insignificant minority has come under violent attack—prompting some lawmakers to call it a pogrom against the minorities by Kashmir’s hegemonic Muslims.

The targeted killing of minorities is not a new phenomenon in Indian-administered Kashmir. When the Islamic insurgency first arose in the region in the late-1980s, it oversaw the ethnic cleansing of the valley’s Hindu Pandit community. It is estimated that some 650 Hindus were killed by militants during that period. Those who were not killed “were instructed to leave the valley or die.” As a result, some 100,000 Hindus (the bulk of the minority population) fled Kashmir and became refugees in various other parts of India.

Thanks to the continuous political turmoil, the Hindu minority that decided to stay in Kashmir has been at the receiving end of both militants as well as the Indian security forces controlling the valley. While the Muslim militants view the Hindu minority as informants for the Indian establishment, the military has always been suspect of their true allegiance.

The vortex of nationalist insurgent violence is now much more brutal than before. Apart from selectively targeting the minority Hindus and Sikhs, militants are targeting anyone not from Kashmir. Just in October, six laborers and daily-wagers working in the restive valley have been killed by these assailants. We should suspect to see additional killings of civilians are going in the coming weeks and months.

What are the likely motivating factors behind these brutal attacks against innocent civilians?

There are three possible triggers behind the low-intensity ethnic cleansing taking place in Indian-administered Kashmir. First, the abrogation of the province’s autonomy and exclusive status by India’s majoritarian government in August 2019 severely dented Kashmir’s exclusive status and autonomy. Kashmir is now considered a Union Territory and is subject to direct rule by New Delhi.

Second, its new status implies Kashmir is open to migration from the rest of India. Theoretically, at least, this new provision stands to severely undermine Kashmir’s ethnoreligious profile. According to the police, these targeted killings by militants are intended to scare people from other states away.

Third, thanks to the central government rule, the region’s politicians are now effectively a neutered lot. They have little or no say in Kashmir’s day-to-day administration and future political trajectory.

In the official Indian narrative, the rise in targeted killings is part of hybrid warfare in Kashmir that seeks “to destabilize a society by influencing its decision-making.” Yet what is new now is that attacks against the government and its interests have shifted from the military to civilian domains, mirroring intra-state civil war dynamics.

However, what is most surprising is that such indiscriminate attacks could take place in one of the most heavily militarized regions of the world. In fact, the rise in Kashmiri hybrid terrorism is due to what one might call the participation of “part-time terrorists” in the conflict dynamics of the region.

Most of the recent targeted killings of civilians and military personnel have been carried out by Kashmiris without any pre-existing record in violence. Thus, they are neither in intelligence records nor being actively monitored. Owing to their clean records, the perpetrators are able to move effortlessly and undetected between areas before mounting surprise attacks against their unsuspecting victims.

What is more, unlike their dedicated and devoted terrorist counterparts, these part-timers prefer to use small arms, as exemplified by the spate of close-range killings of civilians. This allows these hybrid terrorists to escape detection and reprisal because they are focused on quick, one-off killing missions. Once they have accomplished their job of taking out the target, they return to their normal day-to-day life and fully melt into their civilian surrounding.

In the past, the Indian government could undermine traditional terrorism in Kashmir as the threat was primarily from a group of skeletal organizations lacking grassroots support. In today’s changed environment, however, the nature of dissent and the resolve to militarily engage with India has attracted a host of characters from across society.

In the case of Indian-administered Kashmir, the ruling government is faced with two sets of challenges. First, its rule is highly unpopular: the central political leadership making decisions on Kashmir is not trusted by the Muslim majority population. Second, the grassroots dissent that has metamorphosed into hybrid terrorism has also become a useful proxy for foreign agitators.

While the central administration in New Delhi that rules the Union Territory of Jammu and Kashmir is vocal about the second challenge, it does not recognize the civilian dissent on the ground that has largely contributed to the hybrid terror attacks in recent weeks.

The best antidote to hybrid terrorism is the ruling authority’s ability to foster a sense of trust and goodwill among its constituents. There is a massive trust deficit between the Muslim citizenry of Kashmir and the ruling central administration. The Indian government’s abrogation of Kashmir’s special political status and heavy-handed policies in dealing with dissent has created an unbridgeable gap between the ruler and the ruled. In the current circumstance, both stand fully alienated from each other.

Faced with the real and imagined fear of losing their dominance over their birthplace and having been made politically insignificant, plenty of Kashmiri Muslims are taking up part-time terrorist missions in resistance against what is fast becoming an unachievable goal.

Owing to the widespread discontent against Indian rule in the disputed region of Jammu and Kashmir, any credible solution to the security challenges must be multimodal in character and remit. Capping the threat emanating from hybrid terrorism and bringing an end to the conflict would require inter-sectoral, regional, and international cooperation in this long-running civil war. Under the circumstances, the only credible response to this violence must be non-violent in design and implementation.

Such a conflict resolution approach, however viable it may be, is unlikely to find willing ears in New Delhi. The nationalist Indian government has dug itself very deep in its Kashmir policy. To curb the threat of militancy, it is relentlessly pursuing a deeply militaristic strategy in the region that has only served to alienate the masses and foreclose any possibility of intersectoral dialogue and conflict resolution.

Furthermore, any regional and international cooperation to diffuse tensions is impossible, as New Delhi maintains the uncompromising position that Kashmir is an internal matter and beyond the scope of any external debate, let alone intervention.

Both parties to the conflict in Kashmir are intimately aware of the hazardous roadblocks that prevent them from moving forward in the direction of credible peace. It is this knowledge of the unsurmountable challenge that forces both the Indian government and the restive Kashmiris to dig their heels deep in violence towards the other.

Amalendu Misra is a Professor of International Politics at Lancaster University, United Kingdom, and the author of Politics of Civil Wars (Routledge). Follow him on Twitter @MisraAmalendu.