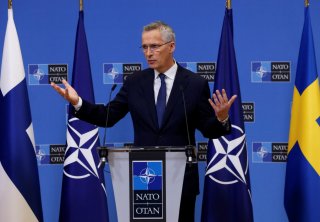 The Senate will soon vote on adding Sweden and Finland to NATO. According to the terms of NATO’s founding treaty, that means the United States would be obliged to defend both countries in the event of a military attack. I intend to vote no.

Finland and Sweden want to join the Atlantic Alliance to head off further Russian aggression in Europe. That is entirely understandable given their location and security needs. But America’s greatest foreign adversary doesn’t loom over Europe. It looms in Asia. I am talking of course about the People’s Republic of China. And when it comes to Chinese imperialism, the American people should know the truth: the United States is not ready to resist it. Expanding American security commitments in Europe now would only make that problem worse—and America, less safe.

China has adopted a policy of dominating its neighbors and bullying free nations into doing its bidding. The Chinese Communist Party seeks effective control over Asia and the Pacific. And it seeks power over the United States—power to dictate our terms of trade, power to take American jobs, power to weaken our economy and make us dependent on Beijing. If left undeterred, China will gain that power. It will swallow up Taiwan, expand its use of slave labor, ramp up its global campaigns of censorship and repression, and make the United States beg for economic access. Even the Biden administration admits that China is now our greatest threat.

Confronting this threat will force us to make tough choices. As the 2018 and 2022 U.S. National Defense Strategies both acknowledge, the United States cannot defeat China and Russia in two major wars at the same time. And we are not where we need to be in Asia. The U.S. is currently not prepared to fend off Chinese military aggression in the Pacific. Our forces are not postured as they should be. And we do not have the arms and equipment there we need, not least because we have been distracted for too long by nation-building activities in the Middle East and legacy commitments in Europe. In the face of this stark reality, we must choose. We must do less in Europe (and elsewhere) in order to prioritize China and Asia.

To be clear, America shouldn’t abandon NATO. But it’s time for our European allies to do more. In particular, they must take primary responsibility for the conventional defense of Europe by investing more in their own militaries. All the way back in 2006, NATO member states pledged to spend at least 2 percent of their GDP on national defense. It should be higher. The United States spends far more than that on defense. But many NATO members still haven’t met even this minimal commitment.

And this isn’t just about U.S. interests. For our allies, it’s also a matter of self-preservation. If NATO member states aren’t prepared to defend themselves, they risk serious danger if U.S. forces are pulled from Europe into a crisis in the Asia-Pacific. Every European nation must now make the necessary investments to prepare themselves for a new threat environment, or risk the worst.

As to Sweden and Finland, both nations are advanced economies, with capable militaries. But they haven’t yet made the policy commitments appropriate to their geostrategic positions. Sweden doesn’t spend 2 percent of its GDP on defense and won’t for years to come. And Finland, though it announced a one-time defense spending boost, hasn’t made clear whether it will sustain these levels. In the event of a future conflict in Europe, U.S. forces would almost certainly be called in to defend both countries.

And even absent armed conflict, NATO expansion would almost certainly mean more U.S. forces in Europe for the long haul, more military hardware devoted there, and more dollars spent—to the detriment of our security needs in Asia, to say nothing of needs at home.

U.S. resources are not unlimited. Already we spend the better part of a trillion dollars a year on defense. And our manpower is already stretched thin across the globe. The United States must prioritize the defense resources we have for the China effort, while there is still time. Until our European allies make the necessary commitments to their own national defense, we must not put more American lives at risk in Europe while allowing China’s power to grow unchecked.

For decades, NATO stood as a bulwark against a militant Soviet Union, protecting the Western world by blocking Communism’s westward expansion. But more than three decades after the Soviet Union’s fall, the geopolitical landscape is very different. Russia is still a threat, but the Chinese Communist Party is a far greater one. And a truly strategic American foreign policy—one that looks to this nation’s strategic interests now, rather than the world of years ago—must embrace this reality, and prepare for it.

Josh Hawley is the junior United States senator for Missouri.