Why Iran and India Are Getting Closer 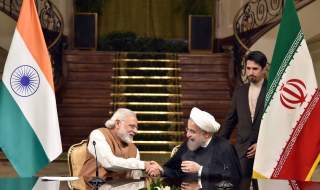 The last few weeks has seen a flurry of important announcements in Iranian-Indian relations. It is usually the commercial transactions that capture most of the headlines, but the potential for closer ties between these two states runs much deeper.

In fact, both Tehran and Delhi have long eyed each other as befitting strategic partners that together can link up the subcontinent and west Asia in ways unseen before. And now the promise of a couple of major energy and transportation projects can provide the much-delayed impetus to push ahead.

The lifting of much of the international sanctions regime on Iran following its July 2015 nuclear agreement with world powers removed a key obstacle in Tehran’s efforts to free itself from global economic isolation. While it is Iran’s growing dealings with Western states and companies that the media attention is typically fixed on, Tehran’s wooing of Asian states such as India is no less momentous.

Steps are presently being taken to clear the path of large-scale commercial tie-ins. For example, it emerged on 1 November that after much delay, Delhi has finally paid Iran $6 billion in outstanding debt. The debt was for Indian oil imports, which Delhi argued it could not pay due to global banking sanctions on Tehran.

The Iranians, never much convinced about how hard Delhi was sincerely trying to reimburse them, nonetheless didn’t let the issue to cloud their long-view on India.

Meanwhile, it also emerged on 1 November that an Indian bank was one of only three foreign banks (the others from Oman and South Korea) to open a branch in Iran. Elsewhere, Air India has announced that it will re-launch direct flights to Tehran from Delhi. The last direct flight service between the two countries had come to an end in 1994.

But among the latest batch of announcements, one stood out. It was the news that Iranian and Indian negotiators are said to be close to signing a major energy deal by March 2017. The deal is about Farzad B, a major offshore Iranian natural gas field in the Persian Gulf, which was discovered by an Indian consortium in 2008.

Ever since its discovery, negotiations have stalled around commercial terms for the field’s development, a lag that was exacerbated by the tightening of international sanctions on Iran in the 2010-2013 period.

During Prime Minister Modi’s May 2016 visit to Tehran, the Indians pushed hard to receive rights to operate the field. They argued they do not want to be just end-users of the extracted gas and oil from the field.

For Iran to give the Indians operating rights would enable a tight strategic partnership between one of the world’s biggest energy exporters and one of the biggest energy importers. Final details are yet to be released but it would be a significant development should there in fact be an agreement on Farzad B by early next year.

From Iran’s perspective, making a country like India – which is Iran’s second largest oil market after China - a stakeholder in its economy is equal to securing political insurance.

The Iranians were both surprised and aghast at how readily Asian states such as India were willing to go hand in hand with Western powers to punish Tehran for its controversial nuclear agreement. The big foreign commercial deals currently pursued by the government of President Hassan Rouhani are significantly motivated by a desire to make it much harder in the future to forge international consensus to sanction Iran.

Lifting of international sanctions no doubt has played its role in pushing things along. But there is more to it. For one, the Indians do not want to fall behind the likes of China, South Korea, Japan and the Europeans who in the droves are looking to cut long-term commercial deals with the Iranians.

In fact, Indian reports claim that Tehran had given Delhi an ultimatum and the Indians feared that the Iranians would give the Farzad B project to another foreign investor unless a suitable financial package was put on the table to develop the field. Iranian oil minister Bijan Zangeneh had complained that successive Indian proposals had proven inadequate and that more Indian money is needed for the project to go ahead.

But Iran’s agenda with India is much bigger than just one gas field. Back in May, 12 agreements were signed between Modi and Rouhani. The biggest deal was a $500 million commitment by India to develop the port of Chabahar, Iran’s only deep-water port on the Indian Ocean.

India says it is a willing partner. Dharmendra Pradhan, India’s Minister of Petroleum, said in April that his country is also interested in building a liquefied natural gas (LNG) plant in Chabahar, which if carried out would represent Iran’s first LNG facility. This is a huge step for Iran, a country that has the world’s largest natural gas reserves but has struggled for years to make itself into a world-class exporter of gas like its neighbors such as Russia, Qatar and Turkmenistan.

Iran is also interested in turning Chabahar into a key petrochemicals hub with production and export facilities. Moving away from mostly relying on the export of crude oil to value-added petrochemicals is a big part of Tehran’s plans for a more self-sufficient but also diversified economy.

The mutual Iranian-Indian desire to develop Chabahar makes plenty of sense. It would provide both countries with much better access to landlocked markets in Afghanistan, Central Asian, and even beyond to Europe while undercutting rival regional projects. The nearby port project of Gwadar, a Chinese-Pakistani initiative, is already forging ahead.

For Tehran, a fully developed Chabahar will give it possession of a geopolitically sensitive project in west Asia and its successful completion will bridge South Asia with Central Asia in an unprecedented fashion while making Iran the lynchpin.

In 2014, for the first time in a century, Indian cargo arrived in Russia via Iran. Prime Minister Modi wants more of it, speaking of creating a “vast network of physical and digital connectivity that extends from Eurasia’s northern corner to Asia’s southern shore.” If nothing else, geography alone dictates Iran as India’s inevitable land bridge to markets in the north and west directions.

Given that India is projected to become even a bigger energy importer in the next few years, the port of Chabahar and the Farzad B field are Tehran’s attempt to lock India into a long-term arrangement. And yet, despite the latest advances and the big-picture logic to push ahead in closer relations, Tehran and Delhi still need to establish agreeable commercial terms for the envisioned long-term ambitions to be sustainable and hence credible.

Alex Vatanka is a Senior Fellow at the Middle East Institute in Washington, DC. Follow him at @AlexVatanka.