Why Iran Needs to Dominate the Middle East 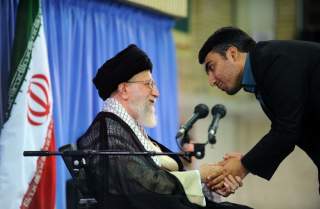 Later, Mohsen Rezaee, the first IRGC Chief Commander, applauded the Houthis’ fight against the Saudi-led coalition and stated that “the Iran-led ‘resistance front’ is fighting with the ‘invasion front’ of Israelis and Saudis in Iraq, Syria, Lebanon, Bahrain, and now in Yemen.”

Earlier, Alireza Zakani, a member of the Iranian parliament who is close to the Supreme Leader, declared, “three Arab capitals [Beirut, Damascus, and Baghdad] have already fallen into Iran’s hands and belong to the Iranian Islamic Revolution, and Sana’a is the fourth.”

These statements reaffirm that Iran has been struggling to expand its strategic reach to the Mediterranean Sea and now to Bab el-Mandeb as well.

Iran’s support of Houthis is sometimes mentioned in context of a new geopolitical “Great Game” with Saudi Arabia. Both countries have been engaged in a decades-long strategic contest for regional supremacy in an area stretching from the Persian Gulf to the Mediterranean Sea and to the Arabian Sea.

On the one side, as Robert Kaplan cogently puts it, Iran has “has brilliantly erected a postmodern military empire, the first of its kind: one without colonies and without the tanks, armor, and aircraft carriers that have been the usual accompaniments of power.” On the other side, Saudi Arabia, as the leader of Sunni camp, is struggling to build a Sunni coalition made up of Saudi Arabia, Egypt, and Turkey to counterbalance the alleged “Shia threat.

After engaging in a series of proxy wars to undermine each other, Riyadh and Tehran are now blatantly wrestling over Yemen. Yemen is Saudi Arabia’s strategic “back door,” and Iran sees it as a strategic trump card for that very reason. By influencing Yemen, Iran seeks to pressure Riyadh to tread lightly in Iraq and Syria, since both countries are part of Iran’s strategic space. Upping the pressure on Saudi Arabia’s southern border would do just that.

Built mostly along sectarian and ideological lines, the Tehran-Riyadh “Great Game” could be also viewed through the geocultural lens. It is obvious that the revolutionary, anti-colonialist, Shia ideology of the 1979 Islamic Revolution has been the driving force for the expansion of Iranian influence in the region. This process has been described in Iran as “exporting the revolution.” The Islamic Revolution generated a centripetal dynamic with geopolitical tectonic shifts in both regional and global politics. It portrayed Iran not only as the political-ideological host for Shias, but also as the sanctuary for a host of militants that challenged conservative regional powers. With a population that is two-fifths Shia, Yemen could be Iran’s next battleground to defy its ideological foe, Saudi-backed Sunni radicalism and Wahhabism.

Yemen’s geostrategic position has been another driver for Iran’s support of  the Houthis. Located between Yemen, Djibouti and Eritrea, the Bab el-Mandeb is the fourth-busiest oil and fuel shipping bottleneck in the world. According to data, 3.8 million barrels a day of crude oil and oil products flowed through the Bab el-Mandeb in 2013. The Houthis can cut the flow of oil or attack vessels in the Bab el-Mandeb if they can seize and hold island in the strait in the case of any blockade or threat to Iran.

The U.S. Energy Information Agency (EIA) explains that “closure of the Bab el-Mandeb could keep tankers from the Persian Gulf from reaching the Suez Canal or SUMED Pipeline, diverting them around the southern tip of Africa, adding to transit time and cost.” This would give Iran access to an addition choke point beyond the Strait of Hormuz. It seems that the prospect of a war in the strait of Bab al-Mandeb is inevitable.

Though decisive, neither geopolitical forces nor geocultural ones have been the driving forces in shaping the trajectory of Iran’s strategy towards Yemen. On the contrary, it is a deeper, more macroscopic, long-term understanding of geography that pushes Iran into building ties with Houthis. Iran stands at the heart of the greater Middle East or what is called the Oikoumene. Iran, as “the castle of the Near East,” was the ancient world’s first superpower, a term that brings to mind Hegel’s statement that Persians were the first historical people.

Geography, however, cursed Iran with its unfortunate lack of natural defensive borders and location, characteristics that have attracted different tribes and nations to Iranian Plateau. Iran’s lack of natural defensive borders, along with the fact that it is the only country in the region that is both Shia and Persian-speaking, are reminders of the significance of Iran’s “strategic loneliness.” Coined first by Mohiaddin Mesbahi, the Director of Middle East Studies at Florida International University, the term suggests that “Iran by design and by default has been strategically ‘lonely’ and deprived of meaningful alliances and great power bandwagoning.”

Both the Islamic Revolution and the Iran-Iraq War intensified Iran’s strategic loneliness. At the height of the war, Iraq received huge support from the Persian Gulf monarchies, the United States, and the Soviet Union. For many Iranians, the eight-year war with Iraq was a war of “all against Iran,” a true manifestation of Iran’s strategic loneliness.

The war with Iraq also reaffirms Iran’s historical problems with defending its frontiers. The very logic of geography and history show that Iran’s final deterrence capabilities are heavily predicated on its ability to project power externally. Vast territory and unstable borders, combined by deep historical insecurity, have pushed Iran to defend its national unity and independence beyond its borders. This means that Iranians, regardless of their regime type or ideology, have been prone to project power in domains beyond Iran’s territory. From this perspective, building strategic connections with Shia militant groups, like the Houthis has been a strategic tool for Iran to compensate for its historical strategic loneliness. For more than three decades, these ties have been the centerpiece of Iran’s strategy to achieve its national security aspirations and to deter foreign threats.

Nicholas J. Spykman once wrote that “geography does not argue. It simply is”. Iran’s specific geography and its strategic loneliness have framed, more than any other factor, the trajectory of its foreign policy and the quest for supremacy.

As Fareed Zakaria pointed out, “when Nixon and Kissinger decided in the 1970s that Iran would be one of their regional policemen, they did so out of recognition of Iran’s geostrategic importance, not simply because they supported the Shah.”

Geography dictates that Iran is pivotal to the future evolution of the greater Middle East through its connections with Shia militant groups. This is what we should call the “revenge of geography.”

Arash Reisinezhad is a research fellow at the Middle East Studies Center and a PhD candidate at the School of International and Public Affairs at Florida International University.