Why Iran Is So Afraid of a Free Iraq 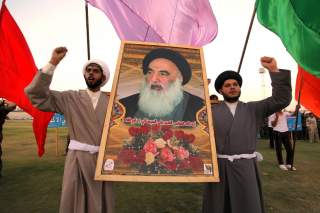 On March 15, 2019, Hassan Rouhani became the first sitting president of the Islamic Republic of Iran to be received by Grand Ayatollah Ali Sistani, the most prominent source of emulation in the Shiite world. Iranian authorities sought to spin the meeting as “historic,” a sign of their reach, Shiite unity, and perhaps even Najaf’s endorsement for Iran’s clerical regime. Iran, for example, a state-owned newspaper, wrote:

This is a meeting with a source of emulation who has opposed the US interventionist policies in Iraq and toward Iran, and has called for maintaining a balance in Iraq's foreign relations. Many scholars believe that Ayatollah Sistani has always tried to bring Iraq's political and religious views closer, and to play an influential role in national reconciliation and building constructive relations between Iran and Iraq.

Al-Monitor, a U.S.-based website that focuses on the Middle East, highlighted Iranian press suggesting that Sistani’s grant of a meeting to Rouhani was an endorsement of Rouhani’s supposed reformism. Tasnim, a news agency close to Iran’s Islamic Revolutionary Guard Corps (IRGC), selectively reported Sistani’s reaction to suggest partnership and endorsement, saying the Najaf-based ayatollah praised Iran's help for Iraq in the fight against terrorism and welcomed strong relations between Iraq with its neighbors on the basis of respect for the sovereignty of others.

Everyone knows that Western powers did not play any role at all in eliminating terrorism in Iraq. They only carried out pretentious shows with their planes and helicopters… The issue of terrorism has not ended yet and may cause problems for the nations of the region again. Americans have another dream for the region, and they are transferring terrorists and the Islamic State to Afghanistan, Central Asia, and Caucasus.

While the simple act of receiving Rouhani was noteworthy, Sistani’s subsequent statement was subtle but pointed in its criticism of Iranian actions. He began that he “welcomed the steps to strengthen Iraq’s relations with neighboring countries based on mutual interests, respect for sovereignty and non-interference in domestic affairs.” Sistani has long refused to hold water for Iraqi politicians too under the thumb of Iran or the IRGC. Indeed, following current Prime Minister Adil Abdul-Mahdi’s selection, Sistani refused to meet the new Iraqi leader until his positions and achievements were clear.

Beyond support for armed militias which take orders more from Tehran than Baghdad, Sistani is also aware that Iraqis, including most Iraqi Shiites, resent more mundane issues such as Iran’s dumping of cheap manufactured goods on the Iraqi market, thereby undercutting struggling Iraqi businesses. The anti-Iranian sentiment is so widespread that when fertilizer run-off poisoned fish in the Tigris River, rumors spread across Baghdad that Iran had killed the fish to force Iraqis to buy from them instead.

When Sistani turned to the struggle against the Islamic State, he “recalled the great sacrifices which were offered by the Iraqi heroes to achieve victory over the terrorist organization and eliminate its threat from the whole region.” While he also recognized “the role of friends in realizing this victory,” he pointedly did not mention Iranian forces by name. Pro-Iranian militia leaders like Badr Corps head Hadi Amiri and other Iran apologists inside Iraq often argue that the Iranian-backed militias were the key to the Islamic State’s defeat. Sistani, however, is making clear that he considers the Iraqis themselves to have been decisive in the victory over the group. Therefore, the oft-voices excuses to violate Iraqi sovereignty are invalid.  In addition, while not by any means pro-American, Sistani certainly did not endorse the conspiracy theory spread by Iranian Supreme Leader Ali Khamenei and Rouhani that the Islamic State was the creation of America.

Sistani continued to list the greatest challenges facing Iraq: corruption, public services and “ensuring that arms are exclusively under state control and its security agencies.” This underscores the warning that Iran should cease abusing Iraqi sovereignty by directing militias and gangs which do not operate outside Iraqi government control and aims. What Sistani seemed to be telling Rouhani was less “thank you” and more “Qods Force chief Qassem Soleimani has outlived his welcome.” Indeed, some reformist press in Iran picked up this aspect of Sistani’s statement otherwise downplayed or ignored by Rouhani and Iran’s hardline press.

Shiism itself—rather than political reformism—has always been the Islamic Republic of Iran’s Achilles’ heel. Khamenei may claim the ultimate political and religious authority, but he lacks the education, reputation, and respect that Sistani has earned through decades of scholarship and teaching. That Rouhani and the regime he serves have tried to twist Sistani’s subtle statements into an endorsement of Iran and condemnation of the United States only undercuts the Iranian regime’s legitimacy further in the eyes of ordinary Shiites.