Why Islam Is an Exception 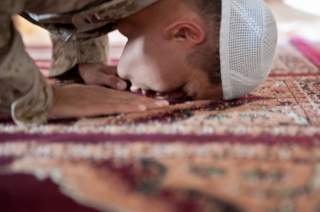 Many Western analysts of terrorism, and of Middle Eastern politics, are bad at religion. They prefer empirical explanations for individual and group actions, and so they’d rather avoid wrestling with God. They’re also likely to see religion as infinitely adaptable, an “epiphenomenal” cover for political or economic grievance—or fertile ground for the mentally unhinged.

Many in the secular West cannot imagine that a religion can meaningfully differ from privatized, post-Enlightenment Protestantism, which usually serves as their template for all public religion. Since Islam and Islamism today behave differently from Christianity in the West, these Westerners assume God’s obstinate presence in Middle Eastern politics is the result of some other process. Whether this stems from a lack of imagination, or from a belief that examining Islam’s theological particulars constitutes bigotry, the consequence is a refusal to consider religion on its own terms whenever it bleeds into the news.

In other words, they fail to think like jihadis.

Shadi Hamid’s new book Islamic Exceptionalism: How the Struggle over Islam is Reshaping the World is a notable exception. It limns the Islamist mind in unnerving detail. Establishing a continuum that stretches from Tahrir Square to Erdoğan’s Turkey to ISIS, Hamid makes the case for theology as a full-fledged analytical tool for political scientists.

Hamid dismantles the tempting, and prevalent, idea that Islam and the Muslim world are just one reformation away from taking up the flag of liberal democracy. For historic and structural reasons, Hamid writes, Islam’s response to modernity was unlike that of Christianity. He points out that Christianity has “no equivalent of Islamic law—an accumulated corpus of law concerned with governance and the regulation of social and political affairs.”

While undeniably Christian states emerged across greater Europe in the first millennium, they were neither founded on nor advanced a particular vision of what constituted a Christian state. For this reason, Catholic canon law and its successors came to privilege “church building over state building.” Confronted with secularization, Christian political theology more or less lacked the resources to fight back.

By contrast, Islamism is what results when centuries of tradition, intertwining government and devout society, collide with the modern nation-state. This collision, coupled with a keen sense of spiritual loss, opened a niche for relentless, patient Islamist competitors in putatively modern states across the Middle East. And, in the case of ISIS, the same drive—Hamid calls it an “obsession”—created a grotesque parody of a post-Westphalian power, complete with borders (albeit hazy ones), an army and a divine mandate to rule.

Another notion that Hamid refutes is the view of Islamism as an ahistoric footnote in the relentless liberal-determinist march toward reason and liberal order. Indeed, he writes, “It would be nearly impossible to imagine a group like the Islamic State in any century but the twenty-first.” In Hamid’s telling, there is a direct line between the “Islamic project” of the Brotherhood’s founder, Hassan al-Banna, and the ressourcement of nineteenth-century reformers like Muhammad Abduh and Rashid Rida. It’s no use hoping for a Muslim Luther to come and sweep away all the discordant and violent bits; Islam had its reformation, and it gave us the mess we have now.

The flashiest subject for an Islamism scholar in 2016 is ISIS, and Hamid gives the terrorists their due analysis. But his assessment only comes after careful scrutiny of Islamic parties grappling with democracy and nationalism in Egypt, Turkey and Tunisia. Tunisia is disproportionately represented among ISIS recruits, despite Islamists’ relative success in that country’s recent electoral experiments. Hamid suggests that by adhering to the Muslim Brotherhood’s gradualist approach to social change, the Islamist Ennahda movement merely “postponed” Tunisia’s necessary ideological reckoning, driving desperate young Tunisians to abandon mainstream politics and seek out God’s will on the battlefields of Syria.

Unlike the average political scientist, Hamid is unafraid to talk about heaven, theodicy and divine justice. He recognizes that religion can be a powerful motivator—“what could be more rational than wanting eternal salvation?”—but doesn’t assume that some other political urge is simmering just beneath the surface. This gives him credibility when he prods Islamist organizations’ own statements and finds them theologically lacking. By listening to Islamists’ claims, he can more effectively see what’s sincere and what’s just good politics.

Hamid also understands that in contrast to the illiberal democracies described worldwide in recent decades, parts of the modern Middle East have moved closer to a “liberal authoritarianism.” In societies like postrevolutionary Egypt, divided by ideology rather than class or geography, a liberal became someone who demanded an intervention against democracy, in order to protect everything it enshrined. Next to Islamism’s cohesive goals and unshakable worldview, liberalism “wasn’t—and could never be—a way of life.”

Islamic Exceptionalism limits its scope to the Middle East, but when Hamid ventures further afield, his work bears interesting fruit. For instance, he points out that in Indonesia and Malaysia, both of which are less homogeneously Muslim, explicitly secular parties tend to lead the drive to enshrine Islamist goals in civil law. Again in comparison to liberalism’s fragility, Islam proves to be an astonishing force even in the absence of Islamist power.

If the book contains obvious gaps, they are in Hamid’s reckoning with non-Muslims in the countries that he studies. At a time when the word “genocide” is used to describe ISIS atrocities, Hamid only mentions the treatment of Christians and other minorities a few times in passing. And it’s clear that his richest fieldwork and scholarship concerns Egypt, which at times hampers his rendering of facts in Turkey, in Tunisia and beyond.

Hamid, who is a senior fellow at the Brookings Institution, writes as a thoroughly liberal American Muslim, and is surely no Islamist. But because his scholarship has led him to scrutinize and amplify Islamists’ motives, methods and words, he has been called everything from a Brotherhood sympathizer to a shill for the Gulf monarchies.

Far from being ideological propaganda, though, his new book is a valuable study of why God has apparently refused to quit the Middle Eastern political spotlight.