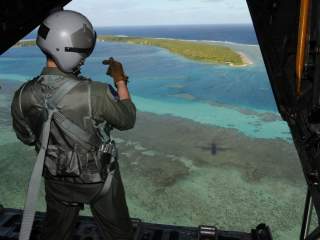 The Western Pacific “island chains” are a persistent feature of Asia’s maritime geography. While their underlying fundaments remain constant, their specific strategic importance has evolved over time. Different major powers have thus interpreted, then re-interpreted and re-evaluated, the value of particular islands, the role they play in national military strategy, and their operational significance in a warfighting context. Chinese naval strategists such as former naval commander Admiral Liu Huaqing have devoted considerable attention to the island chains since the mid-1980s, examining how and where the island chains can hinder or support China’s maritime goals. Yet Chinese strategists are hardly unique in their efforts—military theorists and planners from Germany, Japan and the United States have all pondered the geopolitics of the islands and archipelagos of the Western Pacific, during both peacetime and wartime. To understand the progression of Chinese views, and more recent debates among U.S., Japanese and Chinese strategists, we must trace this lineage of strategic ideas that stretches back more than a century.

The earliest known inklings of island chain-related concepts are intertwined with imperial Germany’s Pacific involvement at the turn of the twentieth century, just as the United States was taking possession of Spain’s previous colonial Pacific territories of Guam and the Philippines. Germany’s tenure as a Pacific colonial power—having acquired the Mariana Islands; and the Caroline Islands, including Palau; from Spain in the aftermath of the Spanish-American War of 1898—coincided with the early writing career of Major General Karl Ernst Haushofer. Serving as a military attaché to Japan from 1908 to 1910, Haushofer was preoccupied with the geopolitics of the Pacific, penning several books on the subject. He regarded the “offshore island arcs” of what he termed the “Indo-Pacific realm” as important geopolitical features providing a useful “protective veil” sheltering continental powers such as China and India.

Japan, for its part, was already a major Pacific sea power at the turn of the twentieth century, having defeated the Chinese Navy and seized Taiwan in 1895. As its maritime strength increased, Tokyo gave careful attention to the strategic value of different islands and archipelagos in the Western Pacific. During World War I, a Japanese expeditionary force wrested control over several Micronesian islands from imperial Germany. These were not only useful stepping stones in Japan’s “southward turn,” focused on exploiting Southeast Asia’s economic and natural resources, but also served as a valuable strategic buffer. In particular, control over Micronesia (chiefly the Mariana, Marshall, and Caroline islands; the last, notably, including Palau) was seen as a hedge against the possibility that the United States would use its bases in Guam and on the Philippines to threaten Japan in a future conflict.

U.S. military theorist Milan Vego explains how Japan took steps to solidify its control over Micronesian islands in the decades following World War I. Vego observes that the Japanese government embarked on a significant settlement and economic campaign during the 1920s and 1930s. The number of Japanese settlers on the islands eventually outnumbered the native islanders. In 1935, Vego notes, Japan withdrew from the League of Nations and its islands became “closed territories,” with Westerners restricted from entry.

At the outset of World War II, the Imperial Japanese Navy engaged in a series of lightning-fast island seizure operations, landings, and fortifications. This included operations to seize both Guam and Wake Island from the United States. During the middle of the war, Japanese forces sought control over other islands within the Second and Third Island Chains, including the Solomon Islands and as far as the Aleutian Islands off the coast of Alaska. Although many islands formerly in Japanese possession passed to the United States the Soviet Union as a result of the war, Japan eventually regained control over key components of the First and Second island chains, including the Ryukyu and the Ogasawara islands.

Japanese concerns over U.S. island possessions in the Western Pacific following the Spanish-American War were mirrored by evolving U.S. concerns over Japanese control over parts of the island chains. As early as 1910-11, U.S. Navy military theorists, including scholars at the Naval War College, suspected that Japan might one day threaten American possession of the Philippines and Guam. The result was the so-called War Plan Orange, assembled by Rear Admiral Raymond Rodgers. This plan, first drafted in 1911 and refined over the next twenty-five years, anticipated later Pacific operations during World War II, including a “leapfrog” campaign to seize the Marshall and Caroline islands from imperial Japan.

The U.S. Marine Corps (USMC)’s contribution to War Plan Orange has been credited largely to Lieutenant Colonel Earl Hancock “Pete” Ellis, one of its intelligence officers, who distinguished himself as an early theorist of amphibious operations. Ellis contributed most directly through his development of Operational Plan 712, “Advanced Base Operations in Micronesia,” approved as a secret “War Plan” in 1921 by his mentor USMC Commandant Major General John Archer Lejeune. In it, Ellis foresaw the island hopping campaigns of two decades later and offered detailed plans for their successful prosecution by U.S. forces. Today, the USMC maintains that “the actual American campaign for Micronesia diverged from Ellis’ plan only in areas affected by technological advances.”

Ellis’s perspicacity may seem extraordinary, and was only fully recognized in hindsight—in part because of his death in 1923 from alcoholic complications in Palau, one of the Japanese-occupied Caroline Islands which he was attempting to survey covertly. But the strength of his conclusions clearly stems from their grounding in then-unprecedentedly-systematic analysis of the island chains’ geography and potential strategic utility. Ellis devoted particular attention to “the continued occupation of the Marshall, Caroline, and Pelew [Palau] Islands by the Japanese,” which “invests them with a series of emergency bases flanking any line of communications across the Pacific throughout distance of 2300 miles.” Describing these features as “a veritable ‘Cloud’ of islands and reefs” containing “chains of low coral stalls,” he offered what for his era was an exhaustive review of their geomorphology and its implications for the operations that he believed would be necessary to wrest them from Japanese control. To this end, he offered a detailed, hierarchical strategy for American seizure of these “inter-supporting island groups” and establishment of “base facilities for the further pursuance of our operations in areas beyond.” Ellis prioritized in particular the recapturing of Guam, “which it is expected will be strongly held by the enemy as a base.”

During the Pacific War, as Ellis foresaw, the U.S. military itself had to hold the island chains it already controlled, and to penetrate fortified Japanese-held island chains. Admiral Earnest King, for instance, believed that controlling Taiwan “would let the U.S. Navy ‘put the cork in the bottle’ of the South China Sea during World War II, severing Japanese SLOCs and thus Japan’s supply of oil and raw materials.” As Vego’s map below indicates, this American exploitation of theater geometry quite literally shaped the outcome of that epic transoceanic struggle.

Emerging victorious from the Pacific War, U.S. strategists soon turned their attention to the importance of the island chains in the nascent Cold War. It was in this period that the “island chains” concept itself was developed and defined clearly. Washington’s postwar Pacific strategy yielded the earliest explicit mention of an island chains concept we have found: a 1948 Joint Chiefs of Staff study demarcating an American defensive perimeter running from the Aleutian Islands, south through occupied Japan, then through Taiwan and the Philippines.

General Douglas MacArthur played a key role in thinking through the geopolitical significance of the island chains during the early Cold War. As Naval War College scholar Toshi Yoshihara points out, MacArthur argued that the U.S. military should establish a “striking force” stationed along a “U-shaped area embracing the Aleutians, Midway, the former Japanese mandated islands, Clark air base in the Philippines, and above all, Okinawa.” In his “Message on Formosa” of 17 August 1950, MacArthur described Taiwan as “an unsinkable aircraft carrier and submarine tender ideally located to accomplish offensive strategy and at the same time checkmate defensive or counter-offensive operations by friendly forces based on Okinawa and the Philippines.” In his 1951 farewell address to Congress, MacArthur distilled his island chain thinking into its most comprehensive and forceful essence, using it as a unifying theme to inform his final policy recommendations concerning the future of American strategy vis-à-vis the Asia-Pacific. In doing so, he described the U.S. Pacific posture as being quite literally based on the central outward-projecting angle of a bastion-battle line:

“. . . the western strategic frontier of the United States lay on the littoral line of the Americas with an exposed island salient extending out through Hawaii, Midway and Guam to the Philippines. That salient proved not an outpost of strength but an avenue of weakness along which the enemy could and did attack. The Pacific was a potential area of advance for any predatory force intent upon striking at the bordering land areas.

“All this was changed by our Pacific victory, our strategic frontier then shifted to embrace the entire Pacific Ocean which became a vast moat to protect us as long as we hold it. Indeed, it acts as a protective shield for all of the Americas and all free lands of the Pacific Ocean area. We control it to the shores of Asia by a chain of islands extending in an arc from the Aleutians to the Mariannas held by us and our free allies.

“From this island chain we can dominate with sea and air power every Asiatic port from Vladivostok to Singapore and prevent any hostile movement into the Pacific. . . .

“The holding of this defense line in the western Pacific is entirely dependent upon holding all segments thereof, for any major breach of that line by an unfriendly power would render vulnerable to determined attack every other major segment. This is a military estimate as to which I have yet to find a military leader who will take exception. For that reason I have strongly recommended in the past as a matter of military urgency that under no circumstances must Formosa fall under Communist control. Such an eventuality would at once threaten the freedom of the Philippines and the loss of Japan, and might well force our western frontier back to the coasts of California, Oregon and Washington.”