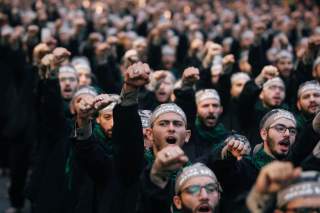 Tensions between Israel and Hezbollah risk boiling over as Jerusalem seeks to confront Hezbollah’s tunnels along the border with Lebanon. On Tuesday Israel launched a major operation dubbed Operation Northern Shield to dismantle cross-border attack tunnels. It comes amid rising tensions with Iran as Tehran entrenches in Syria. The operation also represents Israel’s attempt to preempt a new war with Hezbollah that will likely be fought not only in Lebanon but also in Syria due to Hezbollah’s activities in both countries.

In the first day of Israel's operation, a tunnel was discovered near Metula that stretched 200 meters and entered Israeli territory. The impact of Israel’s operation will have wider regional implications. It comes during a period of rising tensions and rhetoric. On Thursday a suspicious Iranian 747 used by Fars Air Qeshm flew from Tehran to Beirut. The plane has been allegedly used in the past to transport arms as Iran seeks to transport precision guidance systems for Hezbollah’s vast missile arsenal. Later the same evening of November 29, airstrikes struck areas south of Damascus near Kiswah, the site of an Iranian base and Iranian-backed militias. Saudi Arabia’s Al-Arabiya pointed a finger at Israel while Damascus refused to postulate on the perpetrators. This was likely because Syria wants to downplay any airstrikes so close to the capital. Over the first weekend in December Iran announced it had launched a new warship with “stealth” capabilities and U.S. secretary of state Mike Pompeo also accused Tehran of testing a medium-range ballistic missile.

Of particular interest are two announcements by Hezbollah in the seventy-two hours before Israel launched its operation. It released a video threatening to target sensitive sites in Israel in response to any attack. Hezbollah also said that its forces had not been struck in Syria in the November 29 airstrike. This claim that its forces were not hit is an admission by Hezbollah that its forces are present in southern Syria. This presents Israel with a complex threat, one that involves the battlefield in southern Lebanon that Israel fought Hezbollah in during 2006 and in the 1980s and 1990s, as well as a more recent potential flashpoint in southern Syria.

Hezbollah has sought influence in southern Syria ever since the Syrian Civil War began and Hezbollah entered Syria to support the Bashar al-Assad regime. Jihad Mughniyeh, son of famed Hezbollah commander Imad Mughniyeh, was killed in an Israeli airstrike in Syria in January 2015. He was publicly mourned at the time by Qasem Soleimani, Iran’s IRGC Quds Force commander. Israel has increasingly warned against the Iranian presence in Syria throughout the last year. This comes after Jerusalem launched as many as three hundred airstrikes against convoys delivering weapons to Hezbollah and Iranian targets in Syria during the course of the Syrian Civil War. With the war over in southern Syria, Israel’s window to operate is closing. This is especially true because Russia has warned against Israeli “hot heads” and Moscow has deployed the S-300 air defense system to Syria.

Israel’s preemptive operation against the tunnels must be understood in the context of Jerusalem’s experience in Gaza. In 2014 the Israeli Defense Forces (IDF) had to confront a complex tunnel threat and has worked since then to stop tunnels from Gaza and in the north. The IDF established a Joint Task Force in the north specifically aimed at monitoring the Hezbollah tunnels. Former Yahalom engineering commander Col. (Res.) Atai Shelach described the complexity of the Hezbollah tunnels on Tuesday, December 4, as making Hamas tunnels look like a kindergarten project in comparison. Tensions with Gaza from November and experience also overshadow Israeli prime minister Benjamin Netanyahu’s calculations. He was excoriated after 2014 for ignoring the tunnel threat in the south. In mid-November, tensions with Hamas appeared destined for war as Hamas fired 460 rockets into Israel. Netanyahu urged restraint and his Defense Minister Avigdor Liberman resigned in protest. Israel’s government appeared ready to collapse but has hung together as Netanyahu convinced other coalition members of the necessity of focusing on the larger picture regarding Iran and Hezbollah.

That picture is primarily in the north. In an interview, former IDF spokesperson Brig. Gen Avi Benayahu said that Israel is following developments every night in the north, using its advanced technological and intelligence gathering means. He described Gaza as a smaller problem compared to the “cancer” that is developing in the north with Hezbollah and Iran’s threat.

This presents a challenge for Israel and its allies in Washington and elsewhere. Confronting the tunnel threat is only one part of the puzzle. The Trump administration has indicated that the United States wants Iranian forces to withdraw from Syria, a point recently reiterated by James Jeffrey, the special representative for Syria engagement. Iran is also carrying out provocative actions in southern Syria near the U.S. base at Tanf on the Jordanian-Iraqi border. As the war against Islamic State winds down along the Euphrates river, U.S. forces and Iranian-backed militias will come face to face.

Hezbollah is recovering from years of war in Syria and although it talks tough, a war with Israel will seriously damage it. Similarly, Iran wants to consolidate its gains in Syria. The last time it provoked Israel with rocket fire in May, Jerusalem retaliated with numerous airstrikes. Iran shifted to using Palestinian Islamic Jihad proxies in Gaza in October. This points to reticence by Tehran for a real confrontation. Nevertheless, when the confrontation comes the United States must be prepared to work with regional allies to confront Hezbollah and Iran’s presence in Syria.