Why It's Hard to Feel Too Badly for Trump 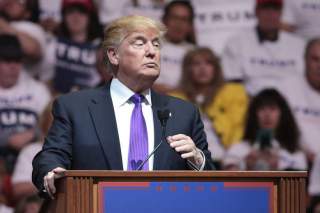 Donald Trump’s refusal to say he would accept the election results during the final presidential debate and the national freak-out that has already followed is the perfect microcosm of the 2016 race for the White House.

It features Trump making an ill-advised comment that will titillate his hardcore supporters but does him no favors with anyone else and the media blowing it out of all proportion. Our pillars of democracy are crumbling before our eyes!

Political reporter Salena Zito has observed that the national media takes Trump literally but not seriously while his supporters take him seriously but not literally. Thus the snarky chyrons about how his Democratic rivals didn’t really “found” ISIS, without any corresponding fact checks on whether Trump is really a “top ISIS recruiter” as Hillary Clinton claimed.

These double standards have almost literally driven some Trump supporters mad, causing them to rightly distrust many mainstream media outlets and instead cocoon themselves in an alternate reality created by fake news sites.

In this particular case, Trump is quite clearly not threatening a civil war if (more likely when) Clinton beats him. He is responding to reports of Democratic shenanigans that, even if exaggerated, have enraged his base. Many Republicans sincerely if erroneously believe voter fraud is pervasive and are tired of seeing party leaders pussyfoot around it.

What Trump is doing is giving these voters what they want while at the same time putting the Democrats on notice that he won’t play nice in the event of any funny business. It’s not the first time he has employed this tactic during the campaign.

When Republican big wigs were dithering about whether to mobilize against Trump during the primaries, he played coy about whether he would support the eventual nominee. He suggested he might bring up the worst allegations against Bill Clinton and Hillary’s support for her husband if his own checkered history with women came up. He floated withholding endorsements from anti-Trump Republicans and lukewarm GOP supporters.

Some of these threats never had to come to fruition, such as when Trump rendered discussion of whether he’d observe the Republican loyalty pledge moot by winning the nomination. Others he backed down from, such as when he endorsed House Speaker Paul Ryan. Trump did pull the trigger on his mutual assured destruction approach to the Clintons and sex scandals, but it hasn’t seemed to work.

When Trump is backed into a corner, he lashes out at the process. Sometimes it works, sometimes it doesn’t. But it has always at least helped him save face with his most ardent backers when things don’t work out as planned.

None of this is to suggest Trump’s gambit was a good idea. It was obvious how his comments would be construed. It is bad politics for Trump to say “wait and see” whether he will accept the results and it is bad for American political norms, even if the latter is being somewhat overstated by elite pearl-clutching.

Barrels of ink will be devoted to why Trump’s loose talk is bad for our political norms, so it is not worth rehashing here. Why is it bad politics for him?

First, all the voters who appreciate Trump’s gesture are already supporting him. The voters he needs have never heard of James O’Keefe or Project Veritas and are looking for reassurance that Trump is not too risky to elect. A million headlines about his supposed refusal to abide by the election results does nothing to instill that confidence.

Second, it signals to most voters that deep down Trump expects to lose. He brags about every poll where is ahead, complains about them being “rigged” when he’s behind. Why would his attitude about Election Day be any different? Fence-sitters will agree with President Obama that he is “whining” about losing fair and square, while some of his own voters might be demoralized if they conclude they will inevitably be cheated out of the election.

That’s why it is hard to feel too badly for Trump even in the face of manifest media unfairness. He commits obvious boneheaded errors repeatedly. His verbal recklessness and palpable lack of self-control are genuinely good reasons to oppose his candidacy—they are qualities that would make him a bad president.

As with the entire presidential campaign, Clinton needs to be little more than a spectator in this episode, occasionally interjecting that this tells us all we needed to know about Trump’s terrible temperament.

Clinton is going to succeed where Never Trump conservatives failed: she is going to win without making much of a positive case for herself and instead arguing that Trump deserves to lose.