Why Japan Is Expanding Its Military in Africa 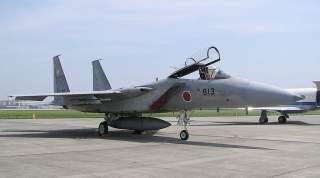 Sitting astride the Bab el-Mandeb Strait, which separates the Red Sea from the Indian Ocean and sees 30 percent of the world’s shipping traffic, Djibouti has become the center of geostrategic competition in Africa in recent years. China’s bid to build its first military base in the small desert nation made headlines late last year, especially due to the installation’s proximity to the biggest American facility on the African continent. Japan has also recently stepped into the fray: Tokyo has entered into negotiations with Djibouti’s government to expand its small military outpost there and to bring in C-130 transport aircraft, Bushmaster armored vehicles and extra personnel.

After Djibouti’s long-time President Ismail Omar Guelleh decided to kick out a secondary American outpost in the south of the country to make space for China’s future facility, Tokyo naturally grew concerned that its only African facility could face a similar fate. Japan realized that Guelleh’s increasingly erratic behavior could seriously imperil its national security, especially after the Djibouti strongman secured a fourth consecutive term in power in April by killing dozens of opposition figures, gagging journalists and torturing activists.

However, Japan’s surprise decision to expand its Djibouti base goes beyond guaranteeing its security interests. Instead, the move should be seen within the context of Tokyo’s growing desire to engage with the African continent and counterbalance China’s aggressive behavior in the South China Sea and elsewhere. The sixth Tokyo International Conference on African Development (TICAD), which brought together Japan and the African Union on August 27 and 28, was held in Africa for the first time and resulted in pledged investments in development projects worth a cool $30 billion – coming on top of $32 billion promised at the 2013 TICAD. These generous investments serve the long term goals Japan has set for Africa: with China’s economy slowing down and with many export-dependent countries feeling abandoned by Beijing – including Angola and South Africa - Tokyo is ready to fill the void.

In Asia, Japan’s parallel quest for allies has continued apace. China’s large-scale land reclamations in the South and East China Seas have burned bridges with many ASEAN countries. Mounting evidence of the artificial islands’ military purposes will accelerate that trend even more. As Thomas Shugart showed, Beijing is now able to strike targets in the Philippines and Singapore with land-attack ballistic missiles, cruise missiles and airpower from Fiery Cross, Subi and Mischief Reef. The Chinese military could also deploy an anti-access area-denial (A2/AD) system overnight. Mischief Reef’s land perimeter alone is the size of the District of Columbia, boasting sufficient space for mobile attack systems and a 10 thousand foot runway. This aggressive new posture has thoroughly undercut the mantra of “a peaceful rise.”

As such, Tokyo is looking to deepen its ties with those countries that share its unease with China’s resurgence. In September, the Japanese government announced it would deliver two new patrol ships to Vietnam after a previous delivery of ten patrol vessels to the Philippines. Additionally, and after tough negotiations, Japan and South Korea put to rest the issue of “comfort women” in a deal brokered with the help of the United States in December 2015. When the agreement was reached, President Obama praised all sides for demonstrating great “courage and vision to forge a lasting settlement to this difficult issue.” While some groups with ties to North Korea (like Chong Dae Hyup) are trying to force Seoul’s hand and undermine the agreement, Japanese prime minister Shinzo Abe and his South Korean counterpart Park Geun-hye, the daughter of South Korean general Park Chung-hee, have jointly managed to calm nationalist elements and secure what was widely heralded as a big diplomatic win.

The Japan-United States-Australia Trilateral Strategic Dialogue, constitutes another key partnership for Tokyo. At their most recent meeting in Washington this past July, the foreign ministers of the three countries united to express their opposition to China’s reclamation moves in the South China Sea.

While Japan has been energetic in organizing a united front, it would be a mistake to think China is quaking in its boots. Paradoxically, it is not Chinese machinations threatening Southeast Asia’s security balance so much as it is America’s wavering commitment to the region. In the United States, widespread opposition to the Trans-Pacific Partnership (TPP) has sent shivers down the spines of many Asian leaders. Singapore’s Prime Minister Lee Hsien Loong gave an impassioned defense of the trade deal, taking the example of Japan as an American ally whose trust in the American nuclear umbrella would be shaken if the trade deal does not pass.

Other ASEAN leaders have been more blunt. Rodrigo Duterte, the Philippines’ firebrand new president, is actively shifting his country away from Washington and pursuing a more accommodating foreign policy with China despite their ongoing South China Sea disputes. Similarly, Australia’s Malcolm Turnbull has kept an open door to Chinese interests and has leased the Darwin strategic port to a Chinese company closely associated with the military for 99 years. The Australian Strategic Policy Institute has warned that the Chinese could use the facility to spy on the more than one thousand U.S. Marines that deploy to the port every year. Even more disturbingly, Australia’s unexpected decision to award its largest ever-military contract (to build 12 submarines) to France is rumored to have been the result of Canberra’s deference to Beijing.

While Japan’s diplomatic forays in both Africa and Asia have helped band together a number of countries with shared interests, the specter of a diminished American presence in the Asia-Pacific threatens to deal a devastating blow to regional cohesion and stability. As China relentlessly pursues its land reclamation activities in the contested waters of the South China and East China Seas, Washington (and especially the next American president) would do well to remember just how much hinges on its security guarantees.

Rob Edens is a London-based researcher (currently working on ASEAN dynamics) and contributor to the Diplomat, the Straits Times, and EuObserver.