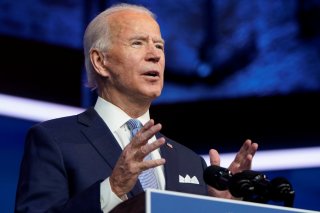 Donald Trump faced an unfairly hostile press and was burdened with innumerable deficits of his own making, but in comparison with Joe Biden he held one clear advantage at the outset of his term: he had beaten fair and square his ideological rivals in his own party. The GOP establishment retained considerable power in the House and Senate—and Trump couldn’t govern without them. But Trump had beaten—no, whipped—Bush and Rubio and Cruz, and they knew it. He could draw large crowds and they couldn’t. His authority over the GOP may have been resented; the “resistance” to him from the Deep State and affluent suburbanites was formidable and eventually brought him down, but no one could deny that his ascension was based on one hard currency of politics, namely, mass voter enthusiasm.

Biden, a likeable enough centrist senator, can boast of no such thing. He prevailed, as Christopher Caldwell cogently reminds us, after an embarrassingly poor start to his campaign, (fourth and fifth-place finishes in Iowa and New Hampshire), salvaged by a critical endorsement from a South Carolina congressman who probably influences more votes than any politician in America, immediately followed by a panicked rush of the party establishment to close ranks against the socialist Bernie Sanders. Though American presidential campaigns last far too long, this critical period seemed to pass in a nanosecond. Congressman James Clyburn’s church ladies (and Biden’s unobjectionable tenure as Barack Obama’s vice president) put him over the top in South Carolina. Next, Michael Bloomberg, Pete Buttigieg and Amy Klobuchar immediately dropped out (the latter two having beaten Biden, sometimes decisively, in states where voters actually see a great deal of the candidates). Elizabeth Warren stayed in to battle Bernie for the party’s Left vote. Biden swept Super Tuesday just as the coronavirus was shutting down the country. It was almost certainly the most underwhelming route to a nomination in recent American political history.

The party which nominated Biden is more divided than the one Trump dominated in 2016; the difference is the battle between the factions hasn’t been joined yet. Socialists would make common cause with deep state and corporate world neoliberals in believing, (or pretending to believe—it can be hard to distinguish) that Donald Trump constituted some sort of unique threat to American democracy. But with Trump gone, they share nothing. One can imagine a gifted politician (a Bill Clinton in his prime) able to soothe the divisions and partially placate the losers; it’s unlikely Biden could manage that at any point in his career.

The splits are as stark as those which separated Mayor Richard Daley and other party “regulars” from the McGovernites who beat them in 1972, but also more complicated. There is a liberal—or socialist-curious—Left that is genuinely concerned about the economic inequality which has been growing in the United States for forty years—Elizabeth Warren, and, in a more dogmatic and further left way, Sanders spoke for them. There is the identity politics faction, which shares their radicalism, ignores economic inequities unless they concern blacks or Hispanics, and is interested in a full-scale cultural war against whiteness, which means against much of American culture and history. Both groups endorsed Sanders but it is not clear how much they share with one another. They share virtually nothing with Michael Bloomberg or other Wall Street titans who contributed heavily to the Biden campaign.

One consequence is that in the early rounds of the Biden transition, every choice has been racially fraught. For the past five days, hundreds of Black Lives Matter (BLM) protestors have laid siege to the home of Los Angeles mayor Eric Garcetti, protesting against the possibility he would be given a cabinet post in the Biden administration. They opposed Garcetti, a Biden campaign co-chair and probably California’s most well-known Latino elected official, for rejecting BLM demands to defund the Los Angeles police department. California governor Gavin Newsom’s choice of a candidate to fill out the Senate term of Vice President-elect Kamala Harris is debated entirely on the basis of identity politics, with blacks and Latinos and LGBTQ groups each proclaiming that one of their “community” deserves the seat; one hears no arguments made on the basis of the character, intellect, or political talents of their favored candidates. Democratic intra-party politics increasingly resembles a zero-sum game of identity competitions, carried out under the feel-good banners of inclusion and diversity.

And yet if the identity politics movement since the first protests following the death of George Floyd seems more radical, pervasive, and frightening, it was not obvious that its beliefs had penetrated into the consciousness of those who were neither college students, young people not yet tied to work and family, or professional liberal activists. In the most bellwether ideological election held since the great awakening, Californians returned to the ballot box once more to pass judgement on race-based affirmative action, which had been made illegal by 53 to 47 percent referendum vote in 1996. In this summer of racial reckoning, liberals in the legislature had pushed for a revote, believing that the state’s changed racial composition, (fewer whites, more Latinos, more Asians) would allow a reversal of that result and give formal sanction for preferential treatment on the basis of race to be used to increase diversity and overcome legacies of past discrimination.

Race-based affirmative action, along with the conundrums of law enforcement, have been the only consequences of the Civil Rights revolution of the 1960s to remain under any serious political or cultural contestation. But since a Vietnam veteran named Allan Bakke famously sued for admission to a California medical school while clearly establishing that his grades and test scores were higher than minority applicants admitted in his stead, it has been a fraught issue, decided ambiguously by the Supreme Court. In California, voters had opted for state neutrality regarding race; now, in the summer of racial justice, progressives assumed they would reverse course.

The voters’ answer disappointed the state’s entire Democratic establishment (which unanimously supported the rollback) and the corporate donors who gave the rollback side a 20-1 spending advantage. Nonetheless, California’s diverse and strongly Democratic electorate still wanted race neutrality, voting for it by a larger margin (56-44) than they had in 1997. Latinos voters split down the middle, Asians and whites voted against the reinstitution of racial preferences.

Meanwhile, in Democratic strongholds of northern Virginia and New York City, Asian parents were leading campaigns to keep exam-based elite public schools alive: against them were arrayed progressive politicians and bureaucrats and Black Lives Matter activists who sought to eliminate tests which measure math and verbal competence and replace them with measures that would reduce the number of gifted students in elite schools—in the name, naturally, of inclusion and diversity.

These local battles take place largely under the national radar as Biden struggles to name a cabinet that will be “the most inclusive in history”—while at the same time assuring that key foreign policy posts are given to the kind of neoliberal Iraq war supporters he is most familiar and comfortable with. Indeed, the battle of leaks and emails over whether the next secretary of defense will be a woman or a black is debated almost entirely without reference to the Pentagon’s mission and how to best carry it out. Then there is the probable nomination of Neera Tanden, who has spent the past several years denouncing Republicans on Twitter, to run the Office of Management and Budget, a nomination that hardly constitutes an olive branch to Republicans.

There is no way to see how Biden or his party squares these circles, which would confound a more vigorous politician with a more robust electoral mandate. As the Soviet Union was fading, Georgi Arbatov, an intellectual close to the Politburo, famously remarked that Moscow was going to cause great problems for the United States by “depriving it of an enemy.” He may have been right. Trump has fulfilled the same function for the Democratic coalition; now that Dr. Evil is gone, the knives will come out. This is why the safest political prediction is that those who voted for a “return to normalcy” under Biden are in for a rude disappointment indeed.