Why Joe Biden Owes His Debate Win To Donald Trump 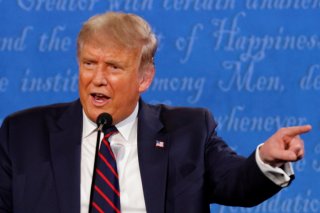 The slugfest between the two was a chaotic mess that played to Biden’s advantage. Even a draw would have constituted a win for Biden. Trump gave him more than that.

Biden was unsure at the outset. He scored no huge blows. But he didn’t need to. Trump, among other things, made a huge, unforced error in asking the Proud Boys to “stand by.” Nor did his constant interruptions of Biden do him any favors. Facing an onslaught from Trump, Biden maintained his composure and spoke to the audience rather than debate Trump. He followed the old debater’s trick of seeking to persuade viewers rather than your opponent.

In targeting Biden relentlessly and interrupting him, Trump gave vent to his anger and grievances. His self-indulgent performance is likely to hurt down-ballot Republicans. His performance will be met with consternation by many Republicans.

Biden did little during the debate to outline his own policies. Instead, he allowed Trump to control much of the discussion. But he was not shy about hurling his own put-downs: Biden did not spare the horses, referring to Trump as a “clown”—a breach of decorum that he corrected by immediately calling him Mr. President. He also engaged in his own dog whistle by calling him “Putin’s puppy.”

For all his professions of desire to remain “invisible,” moderator Chris Wallace played an outsized role. He functioned not as a fact-checker but a rebuker of Trump. At one point he suggested that he felt as though Trump wanted to “switch seats” with him. Wallace’s presence resounded to Biden’s benefit. Ironically, a liberal moderator would probably have felt more inhibited.

The debate is unlikely to have a substantial effect on the presidential race. Trump needed to alter its trajectory. Biden is happy with it. None of that is likely to change. A less fraught and more substantial debate is likely to take place when vice president Mike Pence and Sen.  Kamala Harris debate. But will anyone care? American democracy, which was supposed to be exported to the rest of the world once upon a time, has never looked to be in a greater shambles than now.