Why John Bolton Is Seeking Regime Change Against Donald Trump 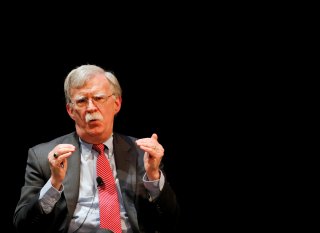 WASHINGTON—National security adviser was the position President Donald Trump could never quite fill correctly. Conventional wisdom prior to this week held that his most calamitous selection was Michael Flynn—the former general who served in his post less than a month and later suffered federal prosecution. If not him, it was H.R. McMaster, whom Trump soured on almost immediately and who nearly careened America into war with North Korea.

But it appears the third time was the unlucky charm. Recent revelations from John R. Bolton—after an apparently still-delayed book launch—could be the torpedo that helps to sink the flailing Trump presidency. Trump’s third national security advisor was apparently told by the president’s second chief of staff, the ex-Marine general John F. Kelly: “You can’t imagine how desperate I am to get out of here. ... This is a bad place to work, as you will find out.”

Bolton says he found out.

And so—after either resigning, or, in Trump’s telling, being unceremoniously sacked last fall—Bolton is living out his best ninth life. A legal logjam, a global pandemic and rolling national crises delayed the release of Bolton’s book at least a season but now even the Justice Department can’t forestall the inevitable: advance copies are making their way to newsrooms across the USA. Indeed, Trump’s desire to punish Bolton by unleashing the Justice Department has inadvertently aided him. Bolton’s profile has never been higher—and his book is at the top of the Amazon bestseller list. Bolton should be thanking Trump for all the free publicity.

Democrats are fuming that Bolton should have appeared before Congress to testify during the impeachment hearings. House Intelligence Committee head Adam Schiff thus complained, “Bolton may be an author, but he’s no patriot.” But Bolton’s book may actually pack more of a punch now that Trump has already been so badly weakened. The cold, hard truth is that for the White House, the results are dismaying. As Rudolph Giuliani (the president’s personal attorney) once remarked, if he is a “hand grenade” on the administration’s future—as Bolton once famously said of the New York mayor and his dealings in Ukraine—then Bolton himself is an “atomic bomb.”

The problems he presents for Trump are numerous. For one thing, Bolton cannot be presented plausibly as a member of the deep state. He is a hardcore conservative who has been battling in the trenches for the GOP for decades. In 2000 he played a key role in ensuring that Florida ended up in George W. Bush’s column during the disputes over election ballots.

Another problem is the specificity of Bolton’s main charges. According to Bolton, President Trump is “stunningly uninformed,” all but directly sought the help of Chinese leader Xi Jinping in his re-election (before Wednesday, Trump’s China hawkishness was perhaps the most salient rationale for his re-election), did not know the United Kingdom was a nuclear power and was once confused over whether Finland was part of Russia.

Of course, Bolton butters his own bread. He’s trying to take advantage of a national depression for his own (emphatically fringe) foreign policy prerogatives. On Afghanistan, Trump supposedly said: “This was done by a stupid named George W. Bush.” And on America’s protracted deployments, in general, in the Middle East, Africa and Europe, the president is recorded as saying: “I want to get out of everything.” These are surely sentiments closer to the hearts of the voters who elected Trump than the unmitigated hawkishness of Bolton. Anyway, why should Trump have followed Bolton’s nutty advice to go to war with Iran? Whatever his deficiencies, Trump made the right call.

On Venezuela, Bolton was horrified that Trump quickly lost patience with the true faith in Washington: regime change. After recognizing opposition figure Juan Guaido as the country’s president, Bolton says Trump privately complained that the mid-thirties pol was just a “kid” while his opponent—strongman Nicolas Maduro—looked “tough.” Here too Trump’s intuitions are closer to common sense than those of polished Beltway mandarins. Maduro’s now survived six years of oil crashes, hyperinflation and intermittent American efforts to help oust him. Add in the pandemic, and Maduro has proven himself nothing if not pretty “tough” politically. Once again, Trump appears to have had it right.

Still, the wind may be in Bolton’s sails. The Lincoln Project, a congerie of NeverTrump Republicans, aired a hard-hitting ad on Thursday that alleged Trump “choked like a dog,” in dealing with Xi Jinping. At the same time, Joe Biden—the presumptive Democratic nominee for president—launched a fresh ad blitz in battlegrounds Pennsylvania, Michigan, Wisconsin and others. In his message, Biden said: “I’ll promise you this: I won’t traffic in fear and division. I won’t fan the flames of hate. … I will do my job and I will take responsibility.”

And Trump? He tweeted that Bolton is “a dope” and “a sick puppy.”

Curt Mills is a senior reporter at The American Conservative covering foreign policy and the 2020 election.