Why Is John McCain Accusing Rand Paul of Working for Russia? 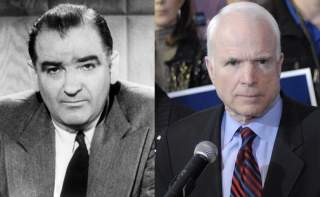 John McCain set an ugly precedent in the U.S. Senate this week. On Wednesday, McCain and two Democrats—Ben Cardin of Maryland and Jeanne Shaheen of New Hampshire—asked the Senate for a unanimous consent vote to advance Montenegro’s bit to join NATO. McCain would brook no dissent: to any colleague who would object to unanimous consent, he warned, “You are achieving the objectives of Vladimir Putin . . . trying to dismember this small country which has already been the subject an attempted coup.” Sen. Rand Paul did object, then left the chamber. And McCain, on the floor of the Senate, explicitly called his colleague an agent of a foreign power.

“The only conclusion you can draw when he walks away is he has no argument to be made. He has no justification for his objection to having a small nation be part of NATO that is under assault from the Russians,” McCain said. “So I repeat again: The senator from Kentucky is now working for Vladimir Putin.”

No, he is not. He is a patriot who is working for the American citizens that sent him to the Senate. Agree or disagree with his views—which he has consistently expressed and will come as no surprise to his constituents or anyone else who has followed Paul’s career—but don’t question his true loyalties. McCain, who himself has served his country nobly, should know this.

Once upon a time the Senate used to pride itself on its collegiality. When Sen. Elizabeth Warren so much as quoted a letter from Coretta Scott King that impugned the motives of Jeff Sessions—during the Alabama senator’s confirmation hearing to become attorney general last month—she was reprimanded and silenced by Senate Majority Leader Mitch McConnell under the chamber’s Rule 19, which states, “No senator in debate shall, directly or indirectly, by any form of words impute to another Senator or to other Senators any conduct or motive unworthy or unbecoming a Senator.” Even at the height of 1950s red-hunting, Sen. Joseph McCarthy never took to the Senate floor to accuse a colleague of working for Moscow; he reserved his invective for the campaign trail. Senator McCain has now outdone him.

For McCain to charge anyone else with serving foreign interests is more than a little ironic. During the Arizona senator’s campaign for the White House in 2008, one of his top advisors, Randy Scheunemann, was a partner in a lobbying firm that took on a $200,000 contract to work for the government of Georgia. According to the Washington Post, the very day that Scheunemann signed the contract, he coached McCain for a call with Georgia’s president and “helped the presumptive Republican presidential nominee prepare a strong statement of support for the fledgling republic.” There is no doubting the sincerity of McCain’s internationalist convictions, but the world in which he operates is one in which large sums of money cement the relationship between American war hawks and foreign capitals.

As for Rand Paul, McCain knows that his objections to NATO enlargement are rooted in the Kentucky senator’s libertarian-inflected understanding of America’s national interest. On Thursday, Paul released a statement explaining his vote in terms that are abundantly familiar to friends and critics alike: “Currently, the United States has troops in dozens of countries and is actively fighting in Iraq, Syria, Libya, and Yemen (with the occasional drone strike in Pakistan). In addition, the United States is pledged to defend twenty-eight countries in NATO. It is unwise to expand the monetary and military obligations of the United States given the burden of our $20 trillion debt.”

To discredit opponents by linking them to Vladimir Putin is, however, the fashion of the season in Washington, DC. McCain’s attack on Paul shows that the hype will not stop with investigations into the 2016 election—where there are serious questions to be answered about Russian hacking and other attempts to influence the race, as well as the connections of Trump advisors such as Michael Flynn to Moscow. In the president’s case, much of the media—to say nothing of Democrats and Never Trump Republicans—has skipped ahead to a verdict in advance of the evidence: suspicion is proof of guilt. (How many viewers of MSNBC, for example, know that no criminal wrongdoing of any sort has actually been alleged against the president?)

But where Rand Paul is concerned, we now have a situation in which principled ideological differences are portrayed as unpatriotic, even morally treasonous—a situation reminiscent not only of the Red Scare but of the moral blackmail that proponents of the Iraq War employed against their foreign-policy critics. Back then, critics of the war were tarred as so many Baghdad Bobs, unpatriotic Americans, useful idiots for Saddam Hussein. Now Putin occupies the role once assigned to the Iraqi dictator.

But the stakes here are much higher. Russia is a great regional power, one with which the United States and Europe must deal realistically—recognizing both its illiberalism and the strategic interests that limit as well as spur Moscow’s actions. Russia is not the Soviet Union, and while moralism was a potent weapon against Communist ideology, it is far less effective in changing how another nation understands its national self-interest. McCain goes beyond the limits of the Cold War not only in his intemperate insults to Rand Paul’s patriotism, but in his unrealistic view of NATO expansion. During the Cold War, the United States was careful to choose only allies it could plausibly defend. McCain does not apply any such test.

The Arizona senator does not see it that way, obviously. But by failing to credit the good faith of those who take a more limited view of American interests, figures like McCain deprive the country of the benefits of robust debate. The reduction of foreign policy to a series of caricatures and boastful assertions of values led to catastrophe in the Middle East, as even many former enthusiasts for the Iraq War readily admit. To indulge in pettiness, paranoia, and bad-faith insults where our policy toward Russia is concerned risks leading to something a lot worse.