Why Lawrence Wright Is Still Wrong 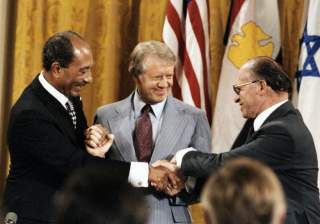 Editor’s Note: Please see here the recent book review in TNI’s latest print issue that sparked this debate and the response that has prompted the below.

While producing a reasonable book about what went on in Camp David between Begin, Sadat and Carter in September 1978, Wright stumbled—rather badly—when it came to trying to describe various bouts of the Zionist-Arab conflict in the preceding decades. And he stumbles even worse when "describing" my views, which is how he chose to counter my criticisms of his "history."

No, I am not an "extreme nationalist," as he puts it. Indeed, I have always opposed Israel's occupation of the Palestinian-inhabited territories (as a young soldier, back in 1968, I published two articles to this effect)—though I don't quite know how Israel can evacuate the West Bank without serious detriment to its security; I spent almost three weeks in a military prison in 1988 after I refused to do reserve duty in Nablus in the West Bank; and I have always favored, as I still do, a compromise peace settlement based on two states for two peoples, one for the Jews and one for the Palestinians. Unfortunately, at every relevant historical junction, the successive Palestinian leaderships (Haj Amin al Husseini, Yasser Arafat and Abu Mazen) have consistently rejected such a two-state solution when it was concretely put on the table—by the British Peel Commission in July 1937, by the UN General Assembly in November 1947, by Prime Minister Ehud Barak and President Clinton in 2000, and by Israeli prime minister Ehud Olmert in 2008.

No, I have not "long since [since when?] transcended scholarship"; I still ply my trade as a historian and, judging by the critics' reviews (including by Wright himself in his letter), I still do it not badly. But I do write journalistic political pieces occasionally (while trying to keep my politics out of my historiography—something that Wright clearly has not managed). In the interview in 2004—when Palestinian suicide bombers were exploding almost daily in Israeli buses and restaurants—I did not, as Wright puts it, "defend ethnic cleansing" in general. All I said was that, in the circumstances of 1948, when the Palestinian Arabs and then the surrounding Arab states, assaulted the Jewish community in Palestine\Israel, and threatened it with annihilation (that's how the Jews at the time, three years after the Holocaust, saw it, and the Arabs reinforced this view when, in the course of that war they expelled the Jews from, and razed to the ground, every site they conquered), the Jewish defense forces had every right to expel Palestinians from the villages which served as their military bases (much as the kibbutzim served as the Jews' military bases). The expulsions, where they occurred—and most of the 700,000 Arabs who were uprooted in that war were not expelled, but simply fled in face of the flail of war—were acts of self-defense. When facing the choice between expelling your attacker or being slaughtered—my preference remains expelling the other. What can I do, those are my values.

Wright misinforms his readers about the findings of the Israeli Kahan Commission, which investigated Israel's role in the Sabra and Shatila camps massacre in September 1982. The commission did not conclude—as does Wright—that the IDF knowingly sent in the Christian Arab Phalangist militia to slaughter noncombatants or that it "tacitly [gave] permission for the massacre to occur." Rather, the commission describes how some of the generals were slow to appreciate and act upon the reports or rumors that reached them that a slaughter was being carried out—and that when they understood what was happening, they stopped the massacre. (Wright adds that there were "no terrorists in the camps." How on earth can he "know" this?) The commission faulted the military hierarchy for their tardy reaction and recommended that the senior officers responsible be dismissed—and they were, starting with Ariel Sharon, the defense minister. (Did the American defense secretary, or any senior officer, resign after My Lai?) Incidentally, the commission found that the IDF took pains during the Lebanon War not to harm civilians. Indeed, "on more than one occasion, this effort caused IDF troops additional casualties," ruled the commission. The commission concluded that "we do not deceive ourselves that the results of this inquiry will convince or satisfy those who have prejudices or selective consciences, but this inquiry was not intended for such people." I wonder who they were referring to? Nothing Wright quotes from my book Righteous Victims (1999) contradicts any of this.

Lastly, I continue to believe—like most rational people—that the Palestinian Arabs are not the descendants of the Philistines, probably a Greek sea people who settled in Palestine's Mediterranean coast toward the end of the second millennium BC. True, all the peoples who inhabited the Land of Israel/Palestine over the millennia came to share some DNA. The Jews (or Israelites) who arrived in Canaan c. 1200 BC acquired genes from the Canaanite tribes (and Assyrians, Babylonians, Egyptians, Persians, Greeks and Romans who passed through subsequently) and the Arabs, who conquered and settled in Palestine 1,900 years later, acquired genes from the land's Jewish and Christian inhabitants at the time, and from others, such as Crusaders and Turks, who invaded later). But this does not make today's Palestinians "descendants" of the Jews or the Crusaders or Turks in any meaningful way. Today's Palestinians are descendants—culturally, linguistically, historically, etc.—of those Muslim Arabs who conquered Palestine in 635-637 AD—and they speak the same language (Arabic) and pray to the same God (Allah). Similarly, today's Israeli Jews are descendants of the ancient Jews—and speak the same language (Hebrew) and pray, if they pray at all, to the same god (Jehovah). Perhaps Wright has met Palestinians who pray to the Philistines' idols or speak "Philistinian." I haven't.

In lending a hand to the Palestinian effort to claim Philistine roots, which is geared to a political and propagandistic purpose—“we were there before the Jews, therefore the land is ours”—Wright simply displays his historical ignorance and political colors.

Benny Morris is a professor of history in the Middle East Studies Department of Ben Gurion University of the Negev. He is the author of 1948: A History of the First Arab-Israeli War (Yale University Press, 2008).