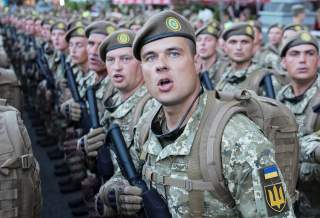 On Thursday, weeks after rumors swirled around Washington that the State Department and Pentagon want the president to arm Ukraine, Secretary of Defense James Mattis confirmed that the White House is considering sending weapons to the country.

President Trump should reject any such proposal. The United States already has devoted $750 million to Ukraine with little to show for it. Providing lethal aid will escalate tensions with Russia and contradict NATO allies who prefer to solve the conflict diplomatically.

U.S. aid has come through the European Reassurance Initiative (ERI), which was launched in 2014 in response to the Russian incursion into Ukraine. In fiscal year 2015, ERI included a $175 million transfer fund that was shared among Ukraine and the three Baltic States. Similarly, the fiscal year 2017 ERI request included $5.6 million “to develop a sustainable Ukraine (UKR) Special Operations Force Generation model.”

And what advancements has Ukraine made with millions of dollars in U.S. benevolence? Not much. U.S. assistance often has been of little utility.

Reuters reported in December that $12 million worth of Raven RQ-11B drones were hacked by Russian equipment, rendering them useless and even dangerous for Ukrainian troops. Hackers even used the drones to spy on Ukrainian military positions. Despite these shortcomings, U.S. troops were still training Ukrainian soldiers to use these drones as of this spring.

The United States also sent Humvees to Ukraine in 2015, but the vehicles dated from the 1980s and 1990s. Some arrived with plastic doors and windows, providing almost zero protection to soldiers. Others broke down after being driven a few hundred kilometers, reportedly “the result of sitting in a warehouse too long.”

Sending more weapons would not improve the situation. Relations between the United States and Russia are already at a low point. Sending new weapons to Ukraine would only escalate tensions—an all risk, no reward proposition for the United States.

What’s more, Russia remains a powerful, nuclear-armed state, and disturbing one of its core strategic interests is unwise and could make the conflict bloodier. In other words, Russia boasts what scholars call “escalation dominance” over Ukraine, meaning Moscow always will possess a stronger, larger military than Ukraine. New weapons are unlikely to change the calculus in the conflict.

Moreover, Russia always will have a greater interest in Ukraine than the United States. Ukraine is not only in Russia’s backyard, but was historically part of the Russian Empire, and later the Soviet Union. Given that “Russian leaders believe their country’s core strategic interests are at stake in Ukraine; they are unlikely to give ground,” even if the United States tries to bleed Russia by attrition.

Of course, some supporters of the Trump administration’s plan say it is “meant to deter aggressive actions by Moscow,” but deterrence already has failed. The Ukrainians could not keep the Russians out of Crimea, Donetsk and Luhansk. Thus, the Russian and “separatist” presence there is already an accomplished fact.

To be sure, the departure of Russian troops would not solve the myriad problems Ukraine still must overcome; for example, what to do about Crimea or how to placate dissatisfied eastern provinces. There is no military solution in Ukraine, as these sorts of problems are best solved by diplomacy. Moreover, Ukraine is not a member of NATO, and the United States is not obligated to come to its aid. Ukraine must consider other solutions.

Giving lethal aid to Ukraine could also put the United States in an awkward position vis-à-vis its NATO allies. Importantly, NATO allies like France and Germany acknowledge the Russian point of view about arming Ukraine, and have previously said that providing Ukraine with lethal weaponry would constitute a “dangerous, permanent escalation” against Russia. Indeed, France and Germany are still calling for a negotiated solution as of last month, and “German, French, and other Western European defense ministers did not attend” events during Mattis’s trip to Ukraine. It is unclear how lethal aid would accelerate a diplomatic outcome.

Although the conflict in Ukraine is a tragedy, the United States can do little. Furthermore, Ukraine’s security has little to do with the fundamental safety of the United States. President Trump should not send lethal aid to Ukraine, and should avoid further entangling the United States into this conflict.

Julie Thompson is a policy and research analyst at the Charles Koch Institute. She earned a Master of International Affairs from the Bush School of Government and Public Service at Texas A&M University.