Why a Limited Strike on North Korea Could Escalate 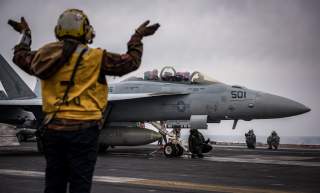 As North Korea warns foreigners to evacuate Seoul, the Trump administration is threatening to hit North Korea the way it hit Syria earlier this month. While the United States should be tougher with Pyongyang, treating Kim Jong-un the same way it dealt with Bashar al-Assad could be a catastrophic miscalculation.

This assertion is not based on North Korean propaganda. Pyongyang’s latest dire broadcast is not so different from past taunts emanating from Pyongyang. But there could be a misstep this time, especially if the United States fails to calculate the risk of how North Korea might respond to certain types of punishment.

This judgment is inspired by the thoughtful insights of Professor Zachary Shore, a historian at the U.S. Naval Postgraduate School, whose 2014 book, A Sense of the Enemy, admonishes analysts not just to look for patterns but for possible pattern breaks.

The patterns of deterrence and provocation on and around the Korean Peninsula are well established. Take the straight-forward decision to deploy an aircraft carrier strike group toward the Korean Peninsula. USS Carl Vinson first plied Asian waters in 1983, the year before Kim was born. Hence, a show of force mission to deter aggression and reassure allies is business as usual for the U.S. Navy and U.S. Pacific Command. Similarly, North Korea routinely practices missile and nuclear tests as a way of consolidating legitimacy at home, blackmailing neighbors and preventing outside intervention.

Yet for all the familiar patterns at work here, there is a potential for an important pattern break to which officials should remain acutely mindful.

As the dark prince of the hereditary ruling family, Kim has had no difficulty dispatching with his regent uncle by antiaircraft fire or by ordering the assassination of his half brother by VX nerve agent. All the while, he has doubled down on building an arsenal of nuclear-tipped missiles, the longest of which he plans to use to target U.S. soil.

The risk of escalation to major war could result from what Americans see a limited strike on the military facility responsible for North Korea’s latest provocation. A similar argument was made on the Syrian airstrike. But unlike Syrian dictator al-Assad, Kim has never witnessed a kinetic attack on his homeland.

Sure, South Korea belatedly fired back across the Northern Limit Line maritime boundary after facing rocket and artillery attack on Yeonpyeong Island in 2010. If North Korea suffered casualties, however, they were concealed from public view. Similarly, the South Korean armed forces opened fire into the DMZ wasteland during the tense aftermath of a landmine incident that maimed two ROK soldiers in August 2015.

The United States and its allies might see a surgical strike against a launch platform on North Korean soil as a rational and proportionate action to dissuade Pyongyang from further brinkmanship. Kim, on the other hand, would likely see any attack as the first salvo of an invasion force designed to terminate his regime. He might well escalate straight away to nuclear war, something suggested by Thae Yong-ho, North Korea’s former second-ranking diplomat in London who defected last year.

Without pretending to know Kim’s mindset (nobody does), his worldview has been insulated and could well be founded on the erroneous belief that he can always have his way and that his adversaries have little ability to touch him.

Strategy must prevail over tactics. I applaud the administration’s recent North Korea policy review, the outcome of which apparently supported a comprehensive pressure strategy. Such a pressure strategy can make us stronger even if Kim persists.

Perhaps President Donald Trump’s unexpected order to fire fifty-nine sea-based cruise missiles at the Syrian air base where chemical weapons had been launched against innocent civilians and children will cause the thirty-three-year-old Kim to reflect anew on his chosen path of proliferation. Now with the aircraft carrier, two destroyers and a cruiser moving within range, the United States is putting in place a formidable strike package of aircraft and missiles.

The timing is important, because the next fortnight covers a couple of major North Korean holidays during which Kim might be especially eager to show his growing missile and nuclear capabilities. These include the 105th anniversary of the birthday of grandfather and founder Kim Il-sung and the eighty-fifth anniversary of the Korean People’s Army on April 15 and 25, respectively.

In all likelihood, the past pattern will hold fast and war will not break out—yet again.

The “real” conflict may occur more in the private meeting rooms among officials and the realms of the electromagnetic sphere and cyber domain. Some speculate the North Korea’s recent missile test, which ended after flying less than twenty-five miles, may well have been affected by electronic sabotage. The Carl Vinson Strike Group is well equipped with both electronic and cyber weapons as well as Standard Missiles that theoretically could shoot down a medium-range missile. In other words, the United States has a range of options with its show of naval presence and air power.

Patrick Cronin is Senior Director of the Asia-Pacific Security Program at the Center for a New American Security.