Why Manchin’s Filibuster Love Is Good for Biden 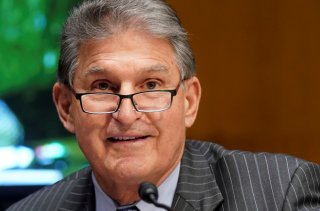 Senator Joe Manchin’s (D-WV) announcement that he will not entertain the idea of eliminating the filibuster—“There is no circumstance in which I will vote to eliminate or weaken the filibuster”—is causing consternation in Democratic circles. But Manchin may be doing President Joe Biden a favor. He is making it impossible for him to cater to his left flank—and putting Republicans on the spot.

For the most part, Manchin’s move is good news for the GOP, at least in the short term. It essentially puts the kibosh on any sweeping Biden agenda that caters to progressive dreams about packing the Supreme Court or passing HR 1, the bill that seeks to expand voting rights and curb the influence of money in elections. But it also will raise scrutiny on infrastructure bills.

Infrastructure represents the trickiest issue for the GOP. It is portraying the Biden proposal as a socialist boondoggle that has nothing to do with rebuilding America and everything to do with catering to traditional Democratic pet projects. But Biden will seek to frame the GOP as being intransigent about a proposal that currently enjoys widespread approval in the polls. According to the latest Morning/Consult poll, 3 in 5 voters support a corporate tax hike to fund Biden’s infrastructure plan: “Sixty-five percent of registered voters said they strongly or somewhat support funding Biden’s infrastructure plan through 15 years of higher taxes on corporations, while 21 percent somewhat or strongly oppose it.” Biden will seek to hammer Republicans, especially as he heads into the 2022 midterms.

Notably, Manchin did not rule out using the reconciliation process to pass an infrastructure bill. Biden has proposed a $2.2 trillion bill but indicated that he is ready to compromise on it. In refusing to jettison the filibuster, Manchin can state that he supported Biden in an attempt to win over Republicans. This is unlikely to succeed. In the end, Manchin will probably vote for an infrastructure bill but be able to posture as having tried to avoid the reconciliation process. “I simply do not believe budget reconciliation should replace regular order in the Senate. How is that good for the future of this nation?” Manchin said. “Senate Democrats must avoid the temptation to abandon our Republican colleagues on important national issues. Republicans, however, have a responsibility to stop saying no, and participate in finding real compromise with Democrats.”

The fact is that the reasons that Manchin stated for refusing to jettison the filibuster were unpersuasive if not delusory. “The time has come to end these political games, and to usher a new era of bipartisanship where we find common ground on the major policy debates facing our nation,” Manchin declared in an op-ed in the Washington Post.

But there is no rational incentive for Republicans to compromise with Democrats on almost any legislation. If a sixty-vote margin is the de facto bar for approving legislation, then the minority can stymie it from the outset by invoking a filibuster. The Senate was never intended to operate in this fashion. But its evolution into turning any minority leader into the equivalent of a senatorial Dr. No cannot be reversed absent nuking the filibuster itself. Right now, Manchin himself is a clear no when it comes to doing that.