Why Is Marco Rubio Harder on Immigration Now? 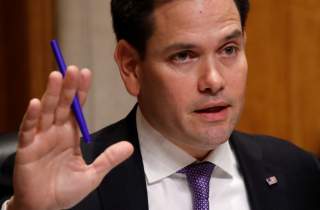 If you had any doubts whatsoever that Florida Sen. Marco Rubio would ever run for president again after a publicly humiliating and weak 2016 campaign, those were steamrolled after Politico published an article this week exploring the senator’s role in the current immigration debate.

The story, titled “Rubio rejects bipartisan immigration gang,” reports that Rubio is keeping his cards close to his chest and largely avoiding the Senate’s current debate over a bipartisan immigration bill. The package crafted by Sens. Lindsey Graham and Dick Durbin, which would codify the Deferred Action for Childhood Arrivals program into law in exchange for billions of dollars in border security funding and a partial reworking of the visa and diversity lottery system, is the only bill in the Senate that has a remote chance of passing the chamber. But Rubio doesn’t believe it’s a smart approach; he’s purportedly working with immigration hawks like Sens. David Perdue and Tom Cotton, two lawmakers pushing for a far more conservative bill that would strip out chain migration and cut legal immigration by half.

There are a couple ways to read this. One is by taking Rubio’s own explanation for granted—that this change in approach is a simple practicality given the current balance of power in Washington. The difference, according to Rubio, between past immigration proposals and the conversations the Senate is having today is that Republicans control Capitol Hill. A prospective immigration bill would need to be far more conservative to pass the House and to get President Donald Trump’s signature. In other words, for Washington to actually solve the immigration problem that has festered for decades, lawmakers would be required to appeal to a president who based much of his campaign on cracking down on illegal immigrants pouring over the southern border.

The second interpretation for Rubio’s low profile is more political. Given the political climate hovering over both sides of Pennsylvania Avenue, he sees no incentive to get out in front of an immigration proposal that could fail to get enough votes. The junior senator from Florida had to deal with exactly that in 2013, when his participation in the comprehensive immigration bill put forth by the “Gang of Eight” caused nothing but trouble to his reputation. His work for a comprehensive bill, only to campaign against it months later, angered a lot of immigration activists who labeled the shift as a betrayal. The move hurt Rubio’s image as an aspiring Republican star and a pragmatic, reasonable dealmaker. And in the U.S. Senate, a lawmaker loses a significant amount of credibility as a negotiator and facilitator if a bill with one’s face on it hits a wall.

The third, and I would wager more plausible, explanation is that Marco Rubio definitely intends to make a second run for the presidency at some point in the future and would rather do it without the immigration albatross around his neck.

During the 2016 GOP presidential primary, Rubio’s membership in the Gang of Eight bill was a hindrance on his candidacy and wedge issue that then-candidates Donald Trump and Ted Cruz used to pummel the Florida senator as an out-of-touch Washington insider who supported amnesty for eleven million illegal immigrants. The immigration issue in general and the 2013 bill in particular was a go-to talking point for Sen. Cruz, who eviscerated Rubio on the campaign trail and on the debate stage as just one more member of the Beltway bubble who rewards bad behavior and puts illegals over American citizens. Rubio struggled throughout to portray himself as within the GOP mainstream, knowing in the back of his mind that GOP primary voters could smell the stench of the Gang of Eight whenever he walked into a room. Trump, who captured the spotlight and hit the immigration issue hard day in and day out, put Rubio on the defensive throughout the campaign.

Rubio is an ambitious man with ambitious plans, so it wouldn’t at all be a surprise if he threw his hat into the ring again once Trump retires from politics. But he’s also smart, recognizing that grassroots conservatives and immigration restrictionists are winning the debate over establishment Republicans who once viewed legalization as part of the solution rather than part of the problem.

Today’s Republican Party, however, is no longer the party of George W. Bush and John McCain. Rubio, ever the political opportunist, is trying to get find the right side of the immigration debate—praying that, once he finds it, fellow Republicans will begin talking again about the young, bright star from Florida.