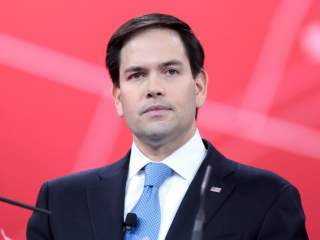 When Marco Rubio first entered the United States Senate in January 2011, it quickly became apparent that John McCain and Lindsey Graham, both of whom are known inside and outside the Beltway for their foreign policy pugnacity, had taken the young Floridian under their wing, making him privy to their missionary, neocon worldview. With the exit of Graham from the presidential race in December and Jeb Bush’s decision to suspend his campaign post-South Carolina, Rubio’s campaign bears the closest resemblance to the bellicose priorities articulated by the Republican party’s foreign policy grandees in the first decade of the 2000s.

On the foreign policy issue that strikes closest to home for Rubio—both geographically as well as with respect to the senator’s heritage—he’s been relentlessly wrong. When it comes to the increasing spirit of rapprochement pervading Cuban-American relations, Rubio has stood resolutely and unambiguously opposed, as one would expect of a burgeoning, young, Miami-based legislator with anti-Castro constituents and a desire to shimmy up the greasy pole of Florida politics. Indeed, in an op-ed published in the New York Times in July 2015, Rubio, with the finesse of somebody used to re-litigating this argument, castigated President Obama for “one-sided concessions that have served only to reward Cuba’s rulers despite their lack of reform.” And perhaps anticipating the line of attack that the way Washington treats Beijing and Riyadh is wholly differential from the way it treats Havana, Rubio was quick to rebut it in a separate Guardian profile, “[China is] the second largest economy in the world, it has nuclear weapons, it’s the second largest military or the third largest on the planet. . . There’s a reality there that doesn’t exist with Cuba that we have to address.” If one cranes the neck far enough, one might almost mistake such candor for realism. Almost.

Yet Rubio’s logic takes a turn for the circuitous when his proposed “solution” is revealed to be the same doubled-down strategies—increased pro-democracy radio broadcasts, blocking the travel visas of Cuban bureaucrats and expedited funding for anti-Castro civil society groups—that had borne absolutely no fruit for successive presidents since John F. Kennedy. Moreover, the Republican Party is not the ideological monolith it once was on the Cuba Question in the days of the Mariel Boatlift or even as recently as the melodrama surrounding Elian Gonzalez. In point of fact, there is a growing list of dissenters from the true faith—Senator Rand Paul offered his support for an easing of relations during numerous presidential debates, and Senator Jeff Flake went so far as to stand next to John Kerry during the reopening of the American embassy in Havana. Carlos Gutierrez, the former commerce secretary, RNC chair and once upon a time the most prominent Cuban-American in public life, penned an op-ed in direct refutation of Rubio’s. And with even fifty-three percent of Cuban Americans responding favorably to Obama’s overtures, perhaps Rubio’s dogmatic opposition—reminiscent of the hard line axiomatically taken by the first neocons toward any nation tinted Red—represents old thinking that has already been utterly discredited.

With an eye cast toward the general election, Rubio has already been workshopping lines for use as salvo rounds against Hillary Clinton. However, the Floridian should be cautioned against being too strident in his attempted juxtapositions. A fondness for the near-constant mention of Benghazi, for example, obscures the fact that Rubio was laudatory of the American-supported NATO action in Libya that inevitably cleared the way for a Benghazi-type event to occur in the first place. In tandem with the aforementioned duo of McCain/Graham, and along with Senator Mark Kirk, Rubio authored an editorial in the Wall Street Journal while on the ground in Tripoli speaking to the sense of optimism they felt in the wake of Muammar el-Qaddafi’s death: “Americans have had their disagreements over the U.S. intervention in Libya, but the sources of those disagreements are now fading into history. What remains is an enormous opportunity for the U.S. to build a partnership with a democratic and pro-American Libya.” This was rubbish. Libya, thanks largely to the actions of Clinton and her State Department confrères, is a balkanized wasteland.

Then there is the rise of ISIS. Rubio sounds just like Clinton. Indeed, even a casual observer of foreign policy can see the capacious shared space in the Rubio/Clinton Venn Diagram:

- Support for the imbedding of American troops with regiments of the Iraqi Army (though, as is too often the case, neither candidate can address how to avoid the conundrum of “Americanizing” the war).

- Support for greater funding and materiel provisions for the FSA and Peshmerga militias.

- Opposition to the continuance of Bashar al-Assad as Syrian president, viewing that as one of the contributing factors to the rise of ISIS, and rejecting firmly the notion that routes to peace potentially run through the regime in Damascus.

- An audacious proposal (made by both candidates in their respective speeches to the Council on Foreign Relations) to potentially bypass the Iraqi government if it proves too sclerotic in order to furnish arms directly to Sunni militias. In this way, the conditions of the Anbar Awakening can be replicated.

What we may be seeing this year is something more than a mere presidential election, but rather a political realignment rotating on the axis of foreign policy. The two candidates occupying the comparative center ground of their respective parties have been unapologetic in their defense of hawkishness. If Rubio flames out on Super Tuesday, as seems likely, then perhaps he will become the latest neocon to defect to her camp.