Why the Media Gets Russia Influence Wrong 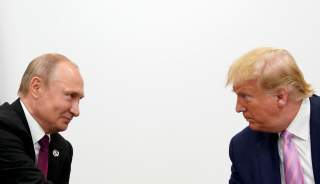 Here they go again. American media organizations could be naive about Russia during and right after 2016, when not that much was known about Moscow’s efforts to sow division in the American elections and the salacious allegations contained in the Steele dossier were given a wide airing. But since then, the Mueller report has appeared as well as the testimony of former Trump administration officials such as Fiona Hill who pointed to Russia’s attempts to create discord in the American political system. Instead of taking those lessons to heart, however, the media, more often than not, continues to act as Putin’s unwitting patsies in floating outlandish allegations.

Consider the website Buzzfeed. The hue and cry over Russiagate was originally triggered by its decision to publish the Steele dossier in January 2017. The problems were with dossier were immediately apparent--sketchy sourcing, reliance on unverifiable claims, sensational allegations, and so on. Some highlights: it reported that  Donald Trump’s personal attorney Michael Cohen had traveled to Prague to negotiate with the Russians; that Trump campaign advisor Carter Page was being bribed with shares of the Russian oil company Rosneft worth literally billions of dollars; and that the Kremlin possessed direct “kompromat” on Trump himself in the form of a video with urinating prostitutes. The decision to publish the Steele dossier was made by former editor-in-chief of Buzzfeed’s news section, Ben Smith. In an interview with The New Yorker to discuss his new job as a New York Times columnist, Smith said he had no regrets about the Steele dossier. “I think it was the right decision, and I have never had any doubts about that.”

Yet Steele himself acknowledged that he was unable to travel to Russia and that he relied on sources with connections to the security services in Moscow. No one in Moscow, as far as we know, has been punished or outed for providing Steele the information. This suggests that the dossier proved to be fertile ground for the secret services to inject bogus information into America’s political system.

Since then, the mischief has continued. In January 2019 Buzzfeed reported that it had internal sourcing and access to documents originating from Robert Mueller’s special investigation proving that President Trump had instructed Michael Cohen to lie to congress. This article was a bombshell, dominating the media cycle with conjecture about the president’s instructions to commit perjury, and what criminal penalties (along with impeachment) he would face. It took less than twenty-four hours for Robert Mueller to pour a hefty dose of cold water on the report. “BuzzFeed’s description of specific statements to the Special Counsel’s Office, and characterization of documents and testimony obtained by this office, regarding Michael Cohen’s Congressional testimony are not accurate,” said a statement released by the notoriously tight-lipped investigation. For nineteen months, Robert Mueller had declined to comment on news reports or release his conclusions prior to his final report. Buzzfeed’s article was so far from the truth that the special counsel violated this unsaid rule just to strike it down. Buzzfeed has never explained how they got it so wrong, and the authors stood by their story.

As it happens, one of those authors, Jason Leopold, is the co-writer of a new batch of articles that were released in the past month and focus on the witness summaries collected by the FBI during the Mueller investigation. It was deja vu all over again. In what amounts to a kind of drive-by shooting, Buzzfeed describes the Center for the National Interest (the publisher of the National Interest) as “a pro-Kremlin think tank.” Pro-Kremlin?

The term is never defined beyond being employed as a clear term of opprobrium and the center, in any case, has a long history of airing a variety of views on Russia. In substituting character assassination for analysis, Buzzfeed news is contributing to the same deterioration of political norms it started when it originally decided to publish the Steele dossier. Score another one for the Kremlin.