Why Mitt Romney Is Championing A Trump Supreme Court Nomination 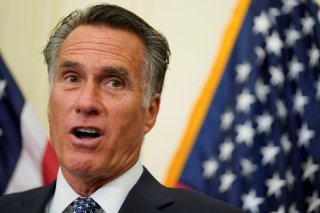 Sen. Mitt Romney (R-UT) isn’t loyal to Donald Trump. Romney voted to impeach him this past February, the sole Senate Republican to do so, deeming Trump “guilty of an appalling abuse of public trust.” But he is loyal to the Republican party and the conservative cause, which is why he said Tuesday morning that he supports a floor vote for the Supreme Court nominee that President Donald Trump plans to announce this weekend. For Democrats, who had hoped Romney would once more buck Trump, it came as a blow. But it also offers a clarifying moment that, in many respects, Trump is not an outlier when it comes to the GOP. He represents what it wants.

Romney put it plainly. “My decision regarding a Supreme Court nomination is not the result of a subjective test of ‘fairness’ which, like beauty, is in the eye of the beholder. It is based on the immutable fairness of following the law, which in this case is the Constitution and precedent. The historical precedent of election-year nominations is that the Senate generally does not confirm an opposing party’s nominee but does confirm a nominee of its own," Romney said in a statement.

"The Constitution gives the President the power to nominate and the Senate the authority to provide advice and consent on Supreme Court nominees. Accordingly, I intend to follow the Constitution and precedent in considering the President’s nominee. If the nominee reaches the Senate floor, I intend to vote based upon their qualifications," he added.

Republicans have a clear path to confirming the president’s nominee to replace Justice Ruth Bader Ginsburg. Just two Republican lawmakers, Sens. Lisa Murkowski (Alaska) and Susan Collins (Maine) have lined up against the pre-election appointment, but Democrats need two more Republicans to block the nomination with a Senate having a 53-seat majority. Democrats will not be able to deny Trump and Senate majority leader Mitch McConnell their greatest triumph—solidifying a conservative majority.

Although Romney’s stance doesn’t in itself vouchsafe Trump a definite confirmation, Senate Majority Leader Mitch McConnell (R-KY) can move forward with the nomination process swiftly. Romney’s GOP colleagues predicted his position Monday. He “is very religious and strongly pro-life. I think he was elected to support a nominee like that. … I would be very surprised if Romney doesn’t vote for the nominee,” Sen. Rand Paul (R-KY) said. Paul was right.

In the past, the 2012 presidential nominee has outwardly opposed Trump’s political agenda. But the Utah lawmaker’s voting record indicates that he’s still widely a conservative who supports a pro-life position and would jump at the chance to gain a right-leaning advantage in the Supreme Court. Other potential swing voters who were expected to side with Democrats in blockading Trump’s nominee included Republican Sens. Cory Gardner (Colo.) and Chuck Grassley (Iowa), saying that they will consider Trump’s pick. Gardner is trailing badly in Colorado. His vote will pretty much doom him. He may well assume that he needs to secure his future as a Republican lobbyist after November 3.

“I will be announcing my Supreme Court Nominee on Saturday, at the White House! Exact time TBA,” Trump tweeted. For now, Trump and McConnell are riding high. Whether it will benefit the GOP at the polls, particularly if the vote is held before the election on November 3, remains an open question.