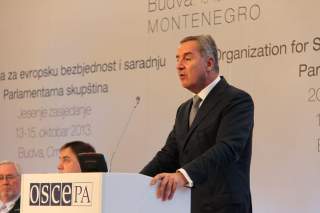 Legend has it that Franklin Roosevelt, discussing U.S. relations with Latin American strongmen like Nicaragua’s Anastasio Somoza Garcia, justified supporting brutal autocrats by saying: “Somoza may be a son of a bitch, but he's our son of a bitch.” The origins of the quote might not be clear, but the statement elegantly captured how Washington handled anti-communist dictators in both hemispheres during the Cold War. With the spike in tensions between the United States and Moscow, a new generation of unsavory leaders is taking advantage of the old patterns.

One excellent example is Milo Djukanovic, who, until a few days ago was Prime Minister of Montenegro. Djukanovic, who came to prominence by bombing Dubrovnik in Croatia in 1991, has incredibly managed to transform himself into the West’s “son of a bitch” in the Balkans. This is a position he embraced over seven terms in office in order to portray any opposition to his rule as Russian interference in the tiny Adriatic state, all the while gaining accolades from European officials for his pro-European stance.

Djukanovic has now resigned, but does this really mean his two-and-a-half-decade rule over Montenegro is coming to an end? Despite Djukanovic’s Democratic Party of Socialists (DPS) winning the most seats in last month’s elections, its failure to secure a majority has left open the possibility that a coalition of opposition parties could form the next government. This would be a first for Montenegro, which has been governed by Djukanovic since the collapse of the Soviet Union in 1991. Indeed, he has served as either prime minister or president for almost the entirety of that time, stepping down twice before only to come back and take the reins. The announcement that he would step down on October 25 and make way for close ally Dusko Markovic, all the while retaining chairmanship of the party, suggests that Djukanovic is merely slipping behind the scenes for a spell rather than retiring from the stage.

Djukanovic argued that his resignation was prompted by a group of Serbian nationals allegedly planning a coup on the day of the poll, with help from Russian secret services. In doing so, Djukanovic has helped cement his Manichean depiction of Montenegrin politics as a “West versus East” battleground, with the long-serving ruler as the only person preventing a full Russian takeover.

Despite asserting that it was his “carefully planned” intention to step down after the election, critics of Djukanovic point to allegations of widespread electoral fraud as the real reasons behind his retreat. His opponents have also voiced suspicions that the coup plot was actually concocted by the ruling DPS to heighten security fears while impressing upon the European Union Montenegro’s commitment to upholding the rule of law and defeating organized crime. These two requisites of EU membership have proven to be Montenegro’s biggest hurdles in accession negotiations. Given the way Montenegro’s longtime leader ran the country, it remains to be seen whether his allies in the ruling elite are serious about grappling with these issues at all.

Under Djukanovic, Montenegro has acquired the reputation as a haven for organized crime gangs, with the former Prime Minister himself admitting to Italian investigators that he partnered with mafia groups to smuggle cigarettes. One hallmark scandal surrounded the privatization of Niksicka Banka, which was bought by Djukanovic with his siblings acquiring a controlling share. Subsequently rebranded as Prva Banka, the Djukanovics proceeded to dole out generous loans to friends, and even used the bank’s funds to pay $7.5 million for a Madonna concert in Budva.

Other beneficiaries of Prva Banka’s largess included Stanko Subotic, a Serbian businessman indicted by the Italian anti-mafia unit for abuse of office, and Darko Saric, a suspected drug smuggler who Djukanovic offered Montenegrin citizenship. When the bank went belly up in 2008, the government promptly bailed it out. Djukanovic later fired the Central Bank governor after he publicly criticized Prva Banka’s illegal activities and had him replaced with a close friend. While Djukanovic’s net worth in 2010 was only estimated to be £10 million, he used the state coffers in 2006 to guarantee €300 million in loans for private companies run by his allies, only half of which was repaid.

Against the wider backdrop of tensions with Russia and Montenegro’s strategic position for NATO on the Adriatic coast, this sordid history has for the most part been conveniently overlooked. In spite of the pile of skeletons in his closet, Djukanovic has seemingly convinced Brussels and Washington that they can rely on him. He is no doubt working to put together a coalition that will keep the DPS in power, and with 36 of 81 seats in parliament, the party could still muster support from smaller rivals to get past the line. Of course, those same parties could alternatively choose to go into coalition with the opposition Democratic Front.

Ironically, in spite of Djukanovic’s dark insinuations that his opponents are Russian puppets, a change in leadership might be exactly what Montenegro needs to move further toward Europe. While his past has been brushed under the rug for now, Djukanovic’s long history of corrupt and criminal activity was bound to become a major sticking point once public attention was focused on possible Montenegrin membership in European institutions. The tiny country on the Adriatic has a lot of work to do to meet Western standards of transparency and good governance, and untainted new leadership will go a long way toward helping Montenegro get there.

James Nadeau is a political consultant based in Brussels with a decade of experience in conflict analysis in developing countries. He has previously been published on The Hill, Real Clear World and writes regularly for the Foreign Policy Association.