Why Morocco Is Investing in Africa 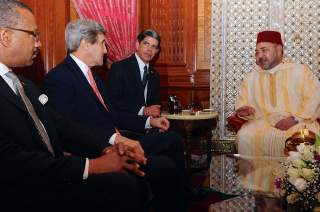 In a historic speech in the Senegalese capital Dakar Sunday, Moroccan King Mohammed VI laid out his country’s commitment to the continent of Africa, and strategy of integration and support for the aspirations of its people.

The occasion was the 41st anniversary of the “Green March,” when the king’s late father, Hassan II, reclaimed Saharan territory from Spain with which Moroccan families and traditions have been deeply interwoven for centuries. Since that time, the kingdom has poured billions into the area’s development and integrated its cities and towns into the national economy and political system. The Moroccan Sahara offers a development model for newly empowered, ambitious states to its south. Yet over the same period of time — largely as a lingering result of Cold War alignments long since obsolete — myriad African nations supported the Polisario militia, which laid claim to the territory. The fighters enjoyed support from neighboring, oil-rich Algeria, which effectively gerrymandered a majority of impoverished states in the “African Union” to ensure their opposition to Morocco. The kingdom, for its part, opted out of the organization, which it judged to be rigged.

Morocco has renewed its commitment to the continent and rejoined the African Union. King Mohammed VI has toured Africa fifteen times since assuming the throne in 1999; invested in its human development, education, economy, and security; and developed his own ports, industries, and human networks to serve as an African way-station for American and European parties wishing to invest in Africa.

This is the context in which the King addressed the “brotherly nations of Africa” in Dakar. He broke with a longstanding tradition of delivering the “Green March” speech on the territory of the Moroccan Sahara. Throughout difficult decades past, Senegal has been a voice of reason in the African Union. “Moroccans will not forget the courageous, solidarity-based stance taken by this country when Morocco decided to withdraw,” the King said. “… The then-President, Mr. Abdou Diouf, deemed that it was impossible to imagine the organization without Morocco.” It is not surprising, perhaps, that the country has long leaned pro-American, and has maintained economic dynamism and political stability.

The king reviewed some of the outcomes of his effort to renew ties across the continent. He described the fruits of his recent visit to Rwanda — where a “promising partnership in all fields” has developed, thanks to support from the country’s popular president, Paul Kagame. Nineteen economic agreements were signed between the two countries on the occasion. The monarch noted similarly positive developments in Tanzania — where 22 agreements were signed — and Morocco’s long history of amity in Guinea, Gabon, and the former Zaire.

In the name of these partnerships, whether long-standing or recently renewed, the King affirmed his commitment to “solidarity-based field action,” “economic and human development,” and to lending its voice on the international stage for the betterment of the continent. He also conveyed optimism that “this return will enable Morocco to become more involved in the continent’s efforts to fight extremism and terrorism, which compromise the future of Africa.”

Another area on which the King focused his remarks is the challenge posed to the continent — and the world — by climate change. In Africa, drought and global warming have had a crushing effect on rural livelihoods, and forced massive rural migration to the largest cities. Referencing the November 7 convening in Marrakech of the 22nd “Conference of the Parties” — a UN-led effort to reduce global greenhouse gas emissions — the King highlighted his intention to convene a special African summit on the sidelines of the conference “in order to develop a common vision to uphold our continent’s demands, particularly in trams of funding and transfer of technology.” A recurring theme in the King’s speeches on Africa has been the legacy of colonialism on the continent; he draws a direct connection between the corrupt governing structures that have held Africans back and the history of exploitation that immediately preceded them. It is a somewhat counterintuitive position for a monarch whose country has been a one of Africa’s most steadfast allies to the European Union and United States. But the King wishes to signal the desire to use this special position to help his fellow African nations claim their due from the West.

The King’s remarks closed as they began — by paying tribute to the memory of the “Green March.” The Moroccan Sahara amounts to half the map of Morocco. The many Moroccans whose roots are there, or who have always lived there, see it as the country’s heart and soul. But from a strategic standpoint, it is the connecting link between the North African monarchy and the many countries to its south which Moroccans feel are as vital to their own country as Morocco can be to theirs. The southern provinces, the king said, “have the potential, in terms of security, stability, and infrastructure, to become an integrated development hub, at both regional and continental levels, as well as a platform for economic cooperation between Morocco and Africa.”

The remarks, received warmly by the Senegalese audience and echoing resoundingly in Morocco, may well represent a crucial turning point — for Morocco, its many allies in Africa, and for the great promise of the continent and its peoples.