Why NATO Isn't Ready to Take on Russia 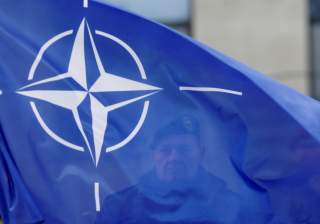 War is being fought in Europe today. It has been going on for more than three years. More than ten thousand people are dead—and some 1.6 million people are internally displaced. NATO—and the EU—have been puzzled with the war in Ukraine with the military framework that has guided their actions during the post–Cold War era. Great-power politics and spheres of influence were supposed to be over. Similarly, long-term large-scale war of attrition using long-range artillery, multiple launch-rocket systems, mechanized forces and proxies have surprised Western statesmen and pundits of strategy.

During the last twenty-five years, the Western strategic effort has focused around humanitarian use of military force, counterterrorist operations and counterinsurgency operations in expeditionary settings. At the same time, the West has got rid of mechanized forces and many other military capabilities and skills related to large-scale warfighting against an advanced peer adversary.

Surely enough, Western states (read: the member-states of NATO) have reoriented their views on international security during the past three years. Russia’s actions in Crimea and Eastern Ukraine have forced NATO and its member-states to refocus on defending Europe. This happened after almost twenty years of outright neglect and disinterest in maintaining—not to mention developing—“real” hardcore military capabilities in Europe for scenarios where the adversary would be something other than an illegitimate third-rate regime committing large-scale humanitarian abuses without any modern military capability.

Military crisis management—or crisis response operations—together with stability operations, humanitarian interventions, comprehensive state-building operations and counterinsurgency operations had the limelight within the Western military framework from the 1990s until 2014, when NATO was exiting Afghanistan and Russia surprised everyone by actually executing its policies militarily according to the logic it had previously been advocating at the rhetorical level. By the time Russian troops took hold of Crimea, the member-states of NATO (and the EU for that matter) were doing some serious soul searching about what would constitute the “new” Western military framework after Afghanistan (2001-), Iraq (2003-) and Libya (2011) had convinced almost everyone that the era of exuberant out-of-area operations is coming to a close.

A decade earlier, in the late 1990s, a lot of effort was placed to dismantle the Cold War era military capabilities and perspectives to warfighting. As the 1999 NATO Defence Capabilities Initiative noted, “many Allies have only relatively limited capabilities for the rapid deployment of significant forces outside national territory, or for extended sustainment of operations and protection of forces far from home bases.”

Stating the fact more brutally, NATO Secretary General Lord Robertson mentioned in a speech in 2003 that “In a nutshell: we have more than 1.4 million regular soldiers under arms in Europe and Canada, plus a million or so reserves. Yet the vast majority are at present useless for the kind of missions we are now mounting.”

While NATO was focusing on surviving the post–Cold War era through the development of Crisis Response Operations and after 2001 the terrorist threat, high-intensity warfighting capabilities and skills were neglected. With decreasing defense budgets European states produced less military power with their small(er) underfunded armed forces. After 1999, we have witnessed—among others—the Prague Capabilities Commitment, Smart Defence Initiative and the Connected Forces Initiative. None of these—or any other initiatives, action plans, roadmaps or final communiques—have produced the alliance-wide, large-scale, high-intensity warfighting capability that many in Europe have been dreaming about ever since 2014.

‘Big War’ is Back

By the time Russia invaded the Crimean Peninsula, most Western states were thinking about how to formulate a new narrative on defense that would assure western citizens that defense after unsuccessful operations in Afghanistan and Iraq still mattered. Russia’s actions has provided the foundations for a new narrative on Western military activity, but the downside is that new capabilities take more than a decade to build. The post-Crimean military tensions—and even a potential military conflict with Russia—will be handled with the atrophied military capabilities that Western states (mostly in Europe) have left of their armed forces.

From the perspective of NATO’s relevance, in Ukraine Russia provided—in a gruesome manner—a “new” (read: old) logic according to which the Alliance and its member-states could redefine their approach to international security in general and military security in particular. Thus, with the shadow of Afghanistan et al. in the rearview mirror, and the traditional attritional military conflict raging in Ukraine, the external and internal conditions were conductive for NATO’s member-states to renegotiate the Alliance’s role in the world and to rejuvenate its take on “military defense and hard warfighting.” NATO was back, but not with a vengeance.

Take the NATO Warsaw Summit Communiqué as an example. Surely enough in the communiqué the member-states of the Alliance express their resolve and willingness to boost the relevance of Article 5 of the Washington treaty—following the path already chosen at the Wales summit in 2014. The communiqué also emphasizes new actions to defend the Alliance territory. This is done, however, within the context of state and non-state actors—resurgent Russia and terrorist organizations in the Middle East and Northern Africa. This is where the internal dynamics of alliance politics is the most visible. The member-states of Alliance ended up equating the obscure threat of global terrorism (in a regional context) with a state-based military actor that is challenging the Western notions of international security by its deeds—both under Article 5.

While global terrorism may call for the use of military force out-of-area every now and then, it does not automatically follow that Article 5 and collective defense are the most useful analytical perspectives to frame the ‘fight’ against terrorism. Western states have decades worth of experience in countering terrorism within the law enforcement framework. Globalized terrorism, even the most brutal jihad terrorist organizations, are not an existential threat to Europe or European nation-states. It is true that in Europe there is a perception that the terrorist threat is higher than ever. However, the statistics reveal that the number of deaths from terrorist attacks in Europe is now lower—or at least not higher—than during previous decades.

While it is self-evident that European populations need to be protected against all kinds of terrorist organizations and even individual terrorists, the militarization of the terrorist threat has not proven successful so far in the post–9/11 “Global War on Terrorism.” In fact, it has been argued that the 2001 launched War on Terror has increased jihadist violence and terrorism in the world. The whole question of locating the contemporary terrorism-based violence as a defense matter and a threat in the agenda of NATO should undergo heavy scrutiny. Is terrorism really a military threat? Can terrorism be defeated on the military domain?

So, where as Russia has (re)provided NATO with a “new” raison d’étre—the intra-alliance dynamics of the enlarged NATO has had a different effect. The NATO of twenty-nine member-states is a totally different “creature” than the Cold War era NATO of twelve to sixteen members with a clear and present existential threat on its borders. Even with Russia challenging the post–Cold War era international (Western) security order by its deeds in Ukraine, Syria and elsewhere, the twenty-nine NATO countries have a hard time analyzing the contemporary security environment uniformly or devising collective policies to counter that challenge.

Solidarity has a different logic in an alliance of twelve member-states compared to the one with almost thirty member-states. This was reflected visibly in the spring 2015 Pew Research Center survey on eleven NATO member-states (nine European countries, the United States and Canada), in which it was noted that “only in the U.S. and Canada did more than half think their country should use military action if Russia attacks a fellow NATO member (56 percent and 53 percent, respectively). Germans (58 percent) were the most likely to say their country should not use military force.”

After Donald Trump was elected president of the United States, the transactional view on international organizations was raised to the fore. This neglected the fact that NATO—and the EU—had witnessed a steady increase of this transactional logic over time long before Trump was sworn in. More than addressing common (or collective) security threats, member-states have showed a “what is in this for me” attitude. Managing migrant flows, combatting terrorism, building status as a great-power and other goals compete fiercely with traditional deterrence and collective defence of Alliance territory against large-scale military attack—both conventional and nuclear in nature.

Article 5 (against advanced adversary) was pushed aside during the two decades following the end of the Cold War as NATO was redesigning its role and survival in the world. Now that military tensions between Russia and the West have gone through the roof, most (European) states find themselves lacking credible warfighting capabilities. Many lack even the willingness to develop and deploy such capabilities—at least with the required level of ambition. Financial austerity measures and savings do not go hand-in-hand with the efforts to build lost capability. Besides, building new capabilities will take a decade or so. Whatever the member-states of NATO decide to do during the next few years will have real influence on European security in the mid- to late 2020s and the early 2030s.