This Is Why NATO Is Stumbling Towards a Crisis 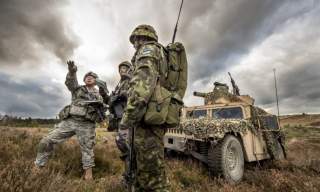 NATO is slouching towards crisis. Beneath a facade of solidarity in the face of Russian revanchism, the Atlantic alliance is facing potentially its stiffest existential test since the end of the Cold War as questions emerge over the kind of organization it claims to be—versus what it does in practice. Controversy is nothing new to the twenty-eight-member club; the NATO mission in Afghanistan, for example, underscored sharp divisions between member states’ willingness and ability to participate in faraway stabilization missions. NATO today, however, is confronted with far more fundamental internal fissures that raise questions about the alliance’s long-term durability. In particular, two issues stand out: the yawning disconnect between NATO’s open door ethos and its increasingly protectionist mood, and the hotly contested matter of deterring Russia in Eastern Europe.

During a visit to Tbilisi on September 7, NATO Secretary-General Jens Stoltenberg hailed Georgia’s domestic and security reforms in a meeting of the NATO-Georgia commission. In his remarks, Stoltenberg referred to Georgia’s integration package issued at the 2014 NATO summit in Wales—reiterated this past July in Warsaw—as a means to “support and accelerate the political decision of Georgia's accession to NATO.”

But despite the lofty rhetoric, there is little evidence that the pace or depth of reforms by Georgia—or Ukraine, or Moldova, or any other NATO aspirant unlucky enough to subsist in Russia’s so-called “near abroad”—is a reasonable barometer of its membership prospects.

For NATO aspirants, periodic statements of support from NATO brass and government officials of member states may play well for domestic political purposes, but they rarely offer an accurate sense of momentum. If anything, the increased risk perception posed by Russia to Europe and Eurasia have only further undermined and interrupted NATO Eastern expansion plans, such as they were.

As things stand, the notion that the main barrier to NATO membership for aspirants are well-crafted reforms is an oft-repeated falsehood.

In plainer terms, no amount of reform can overcome the reality that NATO membership depends on a unanimous political consensus between its twenty-eight members. Corralling twenty-eight variations in national interest, risk perception, and vision for the alliance is difficult during the best of times. Today, it appears virtually impossible with Russian armies bearing down on Europe’s doorstep.

With expansion on indefinite hold and NATO’s increased focus on territorial defense and retrenchment, the practical outcome is a Europe rent between the “haves,” blessed by geography, the NATO umbrella, or both, and the “have-nots”—who have neither. In effect, Ukraine, Moldova and Georgia, despite European aspirations and some impressive reforms (particularly in Georgia), have been stranded on the wrong side of fortress NATO, condemned to subsist in Russia’s shadow because of the scars Russia itself inflicted: Crimea, Donbas, Abkhazia, South Ossetia, and Transnistria.

The Alliance’s allergy to expansion may have its own logic, but it is also dealing blows to its credibility as a guarantor of the peace. NATO’s embrace of retrenchment in the face of Russian militarism in Eastern Europe may adhere to a kind of political and military rationale—in contrast to Afghanistan, it provides a certain clarity of purpose and intent—but it also diminishes the very values the organization was originally created to protect. Skeptics in Europe and the United States who scoff at the contributions of smaller member states or dismiss aspirants in the purely transactional calculus of hard power ignore NATO’s founding purpose: a common military effort by the Euro-Atlantic West to shield Europe from Russian aggression and malign influence.

From the very beginning, NATO represented a conscious decision by the major Atlantic powers—the United Kingdom, France, and especially the United States—to pool their might in the defense of the broader West. This adherence to values is reflected in the first two articles of the founding North Atlantic Treaty itself, and in the Alliance’s growing membership—invited for the sake of preserving and expanding the frontiers of a liberal order, and not perceived military utility.

Far from a burden, the credible possibility of expansion is the lifeblood of NATO, and the rock upon which generations of broader Euro-Atlantic peace and prosperity was built. In this context, NATO’s current posture of retrenchment, at least in the way that it undermined expansion, is arguably a kind of withdrawal from the Alliance’s founding raison d’etre. And as a result, NATO’s expansion impasse has contributed to a widely perceived suspension, if not outright slow death, of Euro-Atlantic conditionality, a largely successful policy linking liberal reforms with integration.

The problems of expansion, retrenchment, and conditionality are only compounded by a damaging spiraling of expectations in some quarters of the Alliance. In July’s Warsaw summit, NATO members agreed to rotate four battalions to the three Baltic States and Poland, significantly bolstering Eastern Flank deterrence. Yet, in some ways this significant statement of intent has been overshadowed by grousing that such a move is somehow insufficient, or even paltry. Catalyzed by an authoritative study from the RAND Corporation, which poignantly illustrates NATO’s conventional vulnerabilities in the Baltics, ongoing debates over the “correct” force posture to counter potential Russian ambitions are sometimes conflating deterrence for denial, and in the process setting an impossible standard for alliance-wide security.

In many ways, this force structure discussion is healthy and necessary, and understandably urgent for NATO’s most exposed members. But Russian power, not to mention the wider spectrum of threats, menaces well beyond the Suwalki Gap; among plausible (if unlikely), potentially catastrophic scenarios, the threat to the Baltics is only one of many. More practically, NATO has neither the manpower nor resources to exhaustively fortify every region under potential threat, and any Alliance response to a large-scale contingency should be organized and launched not from the chaos of the front lines, but from regions benefiting from stable supply lines and strategic depth. This is the only (conventional, large-scale) means by which NATO would ever be successfully defended, and also the only way any future NATO members should expect the NATO cavalry to arrive. Alliance membership is not a substitute for national security, and any aspiring member should have no expectation that it can count on Western (read: U.S.) military bases in the event of accession.

Expansion is a fundamental feature of NATO’s DNA, and the longer it is put on effective hiatus, the more NATO is unmoored from its original purpose. The recent invitation of Montenegro into the alliance, while welcome in the abstract, only underscores Eastern European concerns that it is a matter of geography (and direct proximity to Russia, more specifically) that decides their strategic fates—and not liberalism, democratization, or good governance. NATO’s relevance in the twenty-first century won’t be found by erecting walls against Putin’s Russia, but in continuing to protect and extend the borders of a liberal European space. And while hard power is a pillar of that mission, it was always only intended as an instrument, and not as an end in itself.

Outside the wire, the likes of Ukraine, Moldova, and Georgia should not sit by and wait for the Alliance to fix itself—or collapse. Fairly or not, hard power is now the coin of the realm, and “defensibility” is a key prism through which their Euro-Atlantic aspirations will ultimately be judged. Effective governance with credible means of territorial defense—and plans to better attenuate internal flashpoints—will likely do more to help their case for NATO membership than congressional junkets or a hundred big name lobbyists in Washington and Brussels.

As NATO approaches three years since Russian forces occupied and annexed Crimea, it is becoming increasingly clear that Moscow’s belligerent posture is a long-term issue. However, Moscow’s saber rattling should not trap the Euro-Atlantic West into an indefinite era of insecurity, and compel its members to abandon the values that have long underwritten Europe’s unprecedented period of peace and prosperity. NATO is in the midst of a crisis of purpose and identity at odds with its founding spirit, and only by reversing that trend can the Alliance and the broader Euro-Atlantic project be successful.