Why the Navy's Coronavirus Crisis Turned Into a Political Crisis 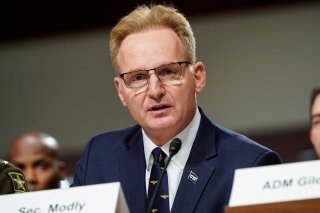 In the days following March 31, which is when Navy Capt. Brett Crozier, the commander of the USS Theodore Roosevelt, a Nimitz-class nuclear-powered aircraft carrier, warned Navy leaders in a memo about the health-care crisis his crew was facing from the coronavirus, Crozier and acting secretary of the Navy, Thomas Modly, lost their jobs. Modly fired Crozier on April 2, after the memo became public and drew media attention. Then, on April 7, Modly resigned after receiving negative backlash for flying to Guam and denouncing Crozier in a speech over the ship’s loudspeaker system. During that same one-week period, the number of sailors who had been on the Roosevelt and tested positive for the coronavirus had risen from less than 10 to 230.

Anyone who understands the culture of the Navy and the decisionmaking process of the Trump administration should not have been surprised at how this unfolded since the first sailor on the ship became infected with the virus on March 22.

To understand the Navy’s culture on issues like this it is important to be aware of at least six factors.

First, when Crozier was selected to command the Roosevelt by Navy officials, they were basically saying to him that unless something went drastically wrong during his tour as the commander, like a collision with another ship, he was on the road to becoming an admiral. In fact, his immediate predecessor as the commander had already been selected for rear admiral. Therefore, when Crozier wrote the letter he knew he could be putting the welfare of his troops ahead of his career.

Second, the commander of a carrier, or any Navy ship for that matter, has absolute authority over and responsibility for the sailors on board that ship. He or she can court-martial crewmembers and make life-or-death decisions about when and where the ship goes, and in the case of an aircraft carrier, when and where to launch the aircraft assigned to the ship. But with that authority comes the responsibility not only to carry out the mission but to protect the well-being of the women and men under his or her command.

Third, there is not much privacy on board any Navy ship. All of the enlisted sailors (and most of the officers) not only work in close quarters but also eat, sleep and shower in confined spaces. To put it bluntly, it is impossible to maintain social distancing on a naval vessel.

Fourth, compared to the other services, naval officers are more likely to speak out or go public with their complaints. For example, the current chief of naval operations, Adm. Michael Gilday, recently told Congress that in order for the Navy to implement the national security strategy it should receive a larger share of the current defense budget than the other services. This tradition goes back to the creation of the Department of Defense. For example, when President Harry Truman’s secretary of defense, Louis Johnson, canceled an aircraft carrier, the naval hierarchy actually organized a group of senior officers to publicly fight the decision in what became known as the Revolt of the Admirals.

Not surprisingly, recently retired admirals Mike Mullen, former chairman of the Joint Chiefs of Staff, and James Stravridis, former NATO Commander, both have publicly supported Crozier’s actions. On April 1, Stravridis wrote that Crozier made the right choice and the Navy will back him up. Two days after the firing, Mullen said he believed “the firing was a really bad decision because it undermined the authority of the military commanders, who are trying to take care of their troops and significantly negatively impacts the willingness of commanders to speak truth to power.” In fact, on April 1, the day before the firing, the current chief of naval operations, Gilday said he was not looking to shoot the messenger.

It is clear that Crozier wrote his unclassified four-page memo to twenty to thirty Navy people in and out of his chain of command because he correctly believed that his superiors were not taking the coronavirus threat seriously and not acting decisively enough to prevent his sailors from dying.

Fifth, before removing a person from command, the Navy normally conducts an investigation to determine responsibility. For example, it took the Navy twenty-four days to remove the commander of the USS Fitzgerald, a guided-missile destroyer, after a collision that resulted in the death of seven sailors and forty-one days to remove the commander of the USS John S. McCain, an Arleigh Burke-class destroyer, after it was involved in a collision that killed ten sailors. In fact, both Modly and Gilday said that they would conduct an investigation. However, shortly after saying that, Modly announced that he was firing Crozier.

Unfortunately, the defense officials appointed by the Trump administration, have not respected the culture of the Navy and the military. For example, when Donald Trump’s first secretary of defense, retired U.S. Marine Gen. James Mattis, protested the president’s plan to remove U.S. troops from Syria, he was fired. And when Trump diverted more than $10 billion from the defense budget to build his border wall, Secretary of Defense Mark Esper did not object and supported the decision. And Modly’s predecessor as secretary of the Navy, Richard Spencer, was fired by Esper when he refused to support Trump’s decision to allow Navy Seal Eddie Gallagher to retire at full rank with his Seal Trident pin despite his conviction for dishonoring the uniform.

Modly eventually decided to fire Crozier because he did not want to suffer the same fate as Spencer. Three days after he fired Crozier, Modly called Washington Post columnist David Ignatius and told him he moved quickly to fire Crozier because he feared Trump would order it done. Navy sources told Ignatius that Modly had told a colleague that Trump “wants Crozier fired.”

Despite his loyalty to Trump, Modly was thrown under the bus and forced to resign after it became public that he trashed Crozier in a profanity-laden speech aboard the USS Roosevelt. Esper and Trump should also pay a price for the way in which they handled the ship’s medical crisis though.

Hopefully, a new administration will respect the culture and the traditions of the Navy and the military’s other services so that there is not a repeat of this situation. Maybe that administration will even promote Crozier to the position of admiral—a promotion he deserves.