Why the New York Times Is Getting Ukrainegate Wrong 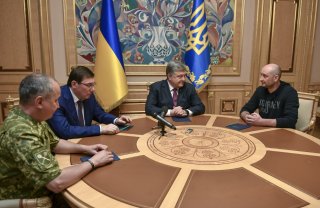 Ukrainegate is back in the news again, but in a major new story released today the New York Times got it wrong. The Times writes that the Department of Justice is investigating several Ukrainian MPs, including Andriy Derkach, for interfering in the 2020 US election. Big deal.

It should come as no surprise that the Department of Justice is pursuing MPs accused of inferring in US elections and acting as agents of Russian influence. In September 2020 the Trump administration Treasury Department already designated Derkach and three others as “Russian agents.” It imposed sanctions on them.

So what’s the real story? The relationship between Rudy Giuliani and Yuriy Lutsenko. It’s financial links, not MPs, that are likely at the heart of Ukrainegate.

WhatsApp messages released by Giuliani’s former associate Lev Parnas in January 2020 suggest that there was a quid pro quo between Giuliani and Kyiv. Yuriy Lutsenko, Ukraine’s former prosecutor general, and Giuliani’s team had a relationship that has been made public through those WhatsApp messages. Lutsenko apparently promised to deliver information that could be used to discredit Biden’s presidential bid in exchange for Giuliani getting then-U.S. Ambassador to Ukraine Marie Yovanovitch removed. In March 2019, Yovanovitch spoke plainly about Ukraine’s egregious financial corruption and fingered then-President Petro Poroshenko and Lutsenko as responsible. At the time, Poroshenko was days away from a tight presidential election in which comedian Volodymyr Zelenskyy would trounce him. Yovanovitch’s speech caught Team Poroshenko off guard and nuked his ability to claim that he was a real reformer.

Investigators and journalists still have not found proof that Lutsenko paid Giuliani for his services – digging up dirt on his ne’er-do-well son Hunter Biden and trying to undermine Biden’s presidential bid – but the suspicion lingers that Trump’s personal lawyer made millions without bothering to register under the Foreign Agents Registration Act. Was Lutsenko acting on his own, out of personal revenge, and sheer hatred for Yovanovitch? Maybe. But it’s also possible that someone stood behind him, as often seems to be the case in Ukraine.

Two weeks ago in Kyiv, Ukraine, I asked several top Ukrainian officials about the Lutsenko-Giuliani financial relationship and no one wanted to comment.

This week Lutsenko himself flatly denied a relationship with Giuliani.

It’s easy to see why the media misses the real story and goes back to the whipping boy of election interference. As Ukraine expert Vladislav Davidzon observes, “Ultimately, there is an extraordinarily unhealthy feedback loop between Ukraine and the United States. This goes in both directions. Money is to be made in large pots and sums by unscrupulous actors in Ukraine with very little effort. It’s not an accident that both major parties' candidates in the 2020 elections were ensnared by a Ukrainian political scandal.” It’s time to figure out what actually happened in Ukraine. Start by questioning Poroshenko’s top aides.