Why North Korea Is Winning 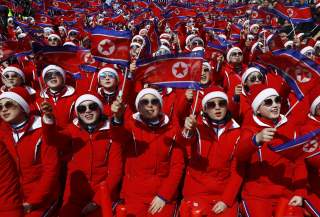 In late 2017, as a result of the multiple nuclear and missile tests by North Korea, it can be argued that the tensions between North and South Korea were at their highest point since the Korean War. By that time, North Korea’s military had conducted its sixth nuclear test and sixteenth long-range-missile test. These belligerent actions were wrapped in an evermore threatening rhetoric by the North Korean leader, Kim Jong-un. As a response, South Korea’s government strongly condemned the actions of its northern neighbor and redoubled its efforts to impose of increasingly aggressive UN sanctions on Pyongyang.

Tensions between the two countries grew to the point that Washington repeatedly expressed its readiness to go to war with North Korea if it did rein in its aggressive actions. Just when the conflict seemed to dangerously spin out of control, Kim Jong-un shrewdly managed to dramatically defuse the tensions with South Korea without having to make any significant concessions or modify his stance. He just had to make a simple announcement.

By announcing that North Korea would send an Olympic delegation to the Pyeongchang 2018 Olympics, Kim Jong-un managed to instantly defuse most of the pressure exerted on it by the South Korean government. Without making any significant reconciliatory promises or moves, he obtained significant political and economic dividends. The effectiveness of this political maneuver can be appreciated by the fact the Seoul’s discourse involving its northern neighbor went from being extremely confrontational and assertive before the announcement, to being conciliatory and welcoming after it.

Before North Korea’s announcement of its intention to participate in the Olympics, both South Korea and the United States responded to Pyongyang’s unprecedented military activities with their own military drills and sought tougher UN sanctions on the North. For example, North Korea’s missile test on November 29, 2017, President Moon Jae-in strongly condemned the tests and promised a stern response to Pyongyang’s provocations. This assertiveness was reflected in Seoul’s preparations to conduct its own missile test.

Moreover, Seoul and Washington took further steps to significantly increase the pressure on Pyongyang by pushing for tougher UN sanctions on North Korea’s oil trade, textile exports and overseas workers. All of these political, diplomatic and military movements were extensively covered by the South Korean official media in a very confrontational way. This barrage of attacks and warnings in the South Korean media came to a screeching halt when Kim Jong-un announced the intention of North Korea to participate in the Olympic games.

By simply announcing its intention to participate in the Pyeongchang Olympics, North Korea was able to transform the confrontational and assertive discourse in the South Korean media into a reconciliatory and friendly one. At the demand of the North Korean regime, Seoul agreed to postpone the joint South Korea-USA military exercises scheduled to take place before the Olympics. Also, Seoul offered to warmly welcome the North Korean delegation and cover all of the expenses for their participation. This friendly treatment of the North significantly irritated Seoul’s vital ally, the United States. Vice President Pence warned that North Korea’s participation in the Olympics was “just a cover up for the repressive regime” and a “beautiful photo opportunity” to deceive the South Korean government and people about its real intentions. The fact that Pyongyang had been accelerating the development of their conventional and nuclear arsenals confirmed this assessment.

However, the South Korean government people chose to ignore the evidence and unconditionally welcome their northern foe. They warmly welcomed the high-level North Korean Olympic delegation and its two-hundred-strong cheerleading team when they arrived in Pyeongchang. The two Koreas jointly paraded during the inauguration ceremony and competed in a number of events as one team. The South Korean media almost exclusively portrayed the North in positive terms and reminded the population that the North and the South should work towards a quick reunification. More importantly, eight out of ten South Koreans welcomed the participation of the North Koreans in the Olympics.

It seems that the cute North Korean cheerleading team and the friendly demeanor of Kim Jong-un’s sister successfully mesmerized the majority of the South Korean population and made them forget the fact that North Korea represented a very real existential for them. Seoul defended the warm welcome of its mortal enemy by arguing that its concessions and accommodations were made for the sake of peace. The South Korean government seemed to have been mesmerized too. President Moon warmly welcomed Kim Jong-un’s sister and met with her four times and emphatically proposed to hold a summit between the leaders of both countries after the Olympics. It is concerning to note that he only met once briefly for a photo opportunity with each of South Korea’s American and Japanese allies.

The fact is that North Korea did not make any concessions or accommodations of its own as a sign of goodwill towards its southern brethren. On the contrary, it declared that “it is more stupid to expect North Korea to give up its nuclear program than to wait for the sea to dry.” Kim Jong-un’s decision to participate in the Olympic games can be considered a successful manipulation of official and public opinions that has yielded significant military, political and economic gains.

Patrik K. Meyer holds a PhD in International Studies from the University of Cambridge and currently is a Visiting Professor at Geilism University in Istanbul, Turkey, and a New America Security Fellow.

Suhyon Koh is an international studies student at Hankuk University of Foreign Studies in Seoul, South Korea. She is interested in analyzing how media is being used to shape public opinion on sensitive issues such as North Korea-South Korea relations.