Why Obamacare Bailouts Will Ruin the Country 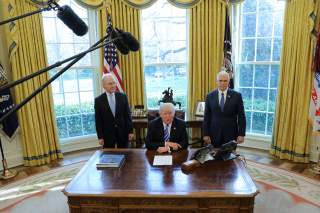 This month could mark a turning point in national health policy. Big insurance companies have been pressuring Congress for a bailout—in the form of more taxpayer subsidies—to “stabilize” Obamacare.

Congress must decide whether to maintain Obamacare on artificial life support, with yet another infusion of billions in taxpayer dollars, or tackle the tough task of replacing Obamacare’s broken individual health-insurance market with alternatives that don’t depend on new taxpayer subsidies to make coverage affordable for middle-class consumers.

Make no mistake. It was inevitable from the beginning that Obamacare would, thanks to its design, devolve into what it is has now become: a heavily subsidized high-risk pool for low-income enrollees. While the offer of subsidized coverage attracted high-cost enrollees, it failed to attract lower-cost enrollees, particularly young adults. Among the consequences: This year, over half of the nation’s counties—including all the counties in ten states—have only one insurer selling exchange coverage, and nearly three-quarters of exchange plans have restrictive provider networks.

After four years of painful experience, it is hard to imagine that anyone seriously entertains the idea that, even with regular transfusions of fresh taxpayer cash, the individual health-insurance market under Obamacare will make a dramatic comeback. That would require a real market where competing insurers offer abundant and affordable insurance options and impressive networks of hospitals and physicians. And that’s what is needed to attract millions of middle-class enrollees.

It can’t happen under the current system. Nonetheless, Republicans in Congress seem ready to throw even more money at big insurers, on the theory that tens of billions of dollars in additional taxpayer subsidies will “reduce” premiums and “stabilize” the market. But bailouts simply paper over Obamacare’s real cost problems: the law’s web of inflexible regulations, onerous mandates and complex subsidy design.‎

While insurers are angling for bigger federal subsidies, their self-employed and small-business customers are looking for less expensive alternatives to Obamacare—not subsidies for overpriced plans that many neither need nor want.

The Trump administration is trying to address that market demand with its recent proposals to expand the availability of association health plans, short-term health insurance policies, and employer health-reimbursement arrangements. Congressional Republicans should follow the administration’s lead and focus on creating and expanding alternatives to Obamacare.

Congressional Republicans need to also move beyond Obamacare, but in the opposite direction. They must offer alternatives to Americans who don’t want to be stuck with Obamacare coverage.