Why Pence's Foreign Policy Points Were Familiar and Metallic 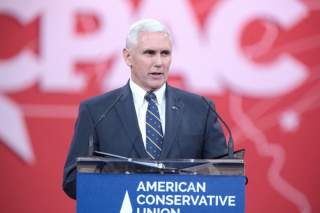 In Albert Camus’ novel The Plague, a littering of dead rats in the streets warns the denizens of Oran that a lethal outbreak is coming, yet they respond sluggishly, reluctant to accept anything so disruptive that it requires them to deviate from their habits. In this year of pestilent politics, we’ve carried on so usually, throwing our conventions and holding our debates, that periodically you have to slap your cheek and remind yourself that Donald Trump is still the Republican nominee and Hillary Clinton is his opponent. Dear God, man, life didn’t used to be like this! Remember?

At last night’s vice presidential candidates’ debate, we were offered a peek at how this election might have transpired were it a quotidian one, devoid of email criminality and Miss Universe interventions, waged between two decent and slightly dorky guys who love their country and disagree on how to better it. Between Mike Pence and Tim Kaine, Pence was said to have the steeper challenge, since he’d have to spend ninety minutes darkened by Trump’s ursine shadow. The burden on him was also heavier after his running mate’s fitful performance last week.

Yet Pence delivered, at least where style was concerned. He was cordial but pugnacious, steady but with an undercurrent of emotion beneath his voice, able to praise Kaine’s public service in one answer and in the next slap his opponent with sarcastic praise for his “creative lines.” One understands how Pence was able to simultaneously get elected Indiana governor and charm many of his state’s Democrats. When Kaine presented peachy statistics on the economy, Pence countered that “people in Scranton know different. People in Indiana know different”—the right approach in this year of discontent and upheaval.

Pence checked just about every box on the post–JFK/Nixon list: unflappable, chuckled at the right times, never stuck out his tongue or eyed his watch, spoke in his library voice even as he was drilling into Kaine. Hillary’s running mate didn’t perform terribly, but he did seem to be at the detriment of rigorous self-coaching, the sort that the socially awkward sometimes put themselves through before a presentation or a first date. Rather than be unreserved about how reserved he is, Kaine overcompensated with constant interruptions, including one during an answer about 9/11 that sounded like something an overeager student might shout out in class. “I was in Virginia!” That earned him a stiff rebuke from Pence.

Kaine did prevail on one front: he more effectively defended his top of the ticket, whereas Pence instinctively drew back when Trump was mentioned and tried to reposition the spotlight on himself. The post-op chatterers on CNN pummeled him for this, insinuating that maybe he was angling at his own presidential run in 2020, but that’s too cynical a read. Pence avoided the melodrama, stuck to the issues, and kept firing flak at Clinton—exactly what Trump should be doing, rather than barking at every fire hydrant he passes.

There were occasions when Pence unmoored himself from the Trump dock entirely, and none so glaring as when he flogged Vladimir Putin, whom his running mate views as a strong leader and potential ally. Pence’s overall tone on foreign policy was militant, towards Syria (“the U.S. needs to be prepared to strike military targets of the Assad regime”), Iran (the nuclear agreement “guaranteed that someday, Iran would become a power”), and Putin again and again (“a small and bullying leader”), discordant sounds against Donald Trump’s more Jacksonian-affected outlook.

Or were they? Trump has certain red lines he won’t cross—the Iraq war for him will always be a mistake—but vast expanses of his foreign policy have always been a Rorschach, equal parts “bomb the hell out of them” and “get the hell out of there.” I doubt the Trump campaign is sweating the nuances of Pence’s answers, if only because technicalities generally don’t cause anxiety in those quarters. Still. The flavor Pence left on foreign policy was a familiar and metallic one: that of a traditional Bush-era Republican who believes that intangible properties of American strength can ameliorate the world’s problems. It’s the same specie of thinking that produced Iraq and Libya, dusted off again for another go.

This is what, despite Trump, the mainstream Republican Party still offers. Perhaps our pre-epidemic politics weren’t nearly as great as we like to remember.