Why Polling Data on America's Economy Can Be Wrong 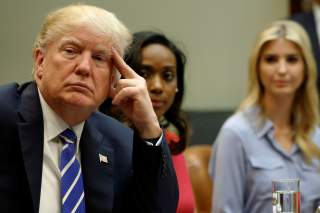 Stop looking at the sentiment surveys for investing insights—whether it is Bloomberg’s Weekly Consumer Comfort Survey or the National Federation of Independent Businesses Small Business Optimism Survey—at least until after the U.S. midterm election. It has long been underappreciated the amount of political noise they contain. The mid-term election will make this far worse. This should not be shocking. Sentiment, comfort, whatever one decides to call it, is a feeling. And politics distort the data.

For example, the Bloomberg survey saw both Republicans and Democrats confidence slowly improving from 2011 onward. That is, until the 2016 election. Following the election, there was a surge in Republican confidence, but Democrats' comfort only moved sideways.

Backing the findings from the Bloomberg survey, a Pew Research survey from March confirms the surge in Republican sentiment following the election and before tax reform. It also clearly shows Republicans as the driver of gains in overall sentiment. The electorate has not always been this divided on their views of the state of the economy. Of note, the 1990s saw little deviation between political parties when it came to views on the economy. The deviation between the two began during the Bush Administration and continued through Obama's.

Where the fun begins is a curious correlation between the NFIB Survey and Bloomberg survey for Republicans. The two have climbed to highs in near lockstep after being relatively tame during the previous administration. At first glance, this relationship might seem spurious. It is not.

A survey from the National Association of Small Businesses in 2016 found that 50 percent of small business owners are affiliated with the Republican Party. Only 21 percent stated they belonged to the Democratic Party. In other words, a survey of small business owners is essentially a survey of Republicans. With the Presidency and both Houses under GOP control, it makes sense that the surveys have moved close to all-time highs.

Also, the NFIB Survey is widely followed by money managers and economists trying to get a leg up on the trends underpinning the economy. Furthermore, since small businesses make up such a large part of the overall economy, this only seems logical.

A survey that may prove more useful in judging sentiment of those running America’s investable universe is the Business Roundtable’s CEO Survey. A quick glance at the membership list shows these are household names and many CEOs are associated with ticker symbols. For this survey, sentiment picked-up slightly in the immediate aftermath of the election and another surge came following tax reform.

This is a stark contrast to the NFIB Survey which saw the majority of its surge immediately following the 2016 election. The most recent survey saw a decline as CEOs worries about tariffs and trade picked-up steam:

“In a special trade-related question this quarter, CEOs expressed concern over the Administration’s approach to international trade issues. Specifically, 95 percent of the CEOs who responded to the special question said that “foreign trade retaliation leading to lower U.S. exports” was a moderate or serious risk…”

CEOs do not seem to be too caught up in the politics of the United States but are hyper-focused on their businesses. Tariffs are what matter.

Here is where the problem of the sentiment surveys will come into focus. The odds are in favor of a Blue House and a Red Senate. In reality, there is little chance of a Democratic sweep in the mid-terms. But due to how elevated the sentiment indicators are that may not matter.

For the CEOs of the American equity universe, the sentiment shift is around trade. For small business sentiment, the politics are the pivot points. The NFIB Survey and Bloomberg survey are far more widely followed than the Business Roundtable’s CEO survey, not to mention that the NFIB is widely used as a forward indicator of economic activity.

Therefore, they may only be telling us about the political atmosphere, but the market may interpret shifts in the data as something far more troubling than a decline in Republican political fortunes. As the election nears, there is a high likelihood both the NFIB and the Bloomberg surveys decline. It is unlikely that there will be an offsetting surge in Democrat sentiment to offset any declines on the GOP side.