Why Pompeo Must Prioritize U.S. Diplomacy 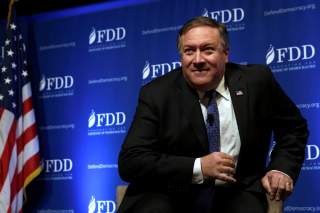 Most diplomats—even retired ones, like me—don’t make a habit of speaking publicly on political issues. But we never hesitate to make our voices heard when America’s national interest is at stake. And in the wake of Rex Tillerson’s continued attempts to gut the State Department, his replacement can and must take decisive action to restore American diplomatic leadership and capabilities. That is why I joined two hundred of my former colleagues in writing to Senators Corker and Menendez to highlight the urgent need to reinvigorate U.S. diplomacy.

The upcoming nomination hearing for Mike Pompeo to serve as the new Secretary of State offers a pivotal opportunity to secure his commitment to reinstate American leadership in the world. The Senate Foreign Relations Committee needs to hear loudly and clearly that Pompeo intends to lead internationally, and that he understands the vital importance of adequately funding and staffing the Department of State.

Whether we like it or not, we live in an increasingly interdependent world. Isolationism and wishful thinking did not work in the 1930s—and will not be any more successful in confronting the even more complex global challenges that we face today. If the United States is serious about safeguarding and promoting U.S. national interests, then it is imperative that the country assumes a leadership role within the international community.

Despite what some politicians might claim, American diplomacy cannot be conducted on the cheap and will only be successful if it is supported by sufficient funding. As then-General Mattis once testified to Congress when he led U.S. Central Command, “If you don’t fund the State Department fully, then I will have to buy more ammunition ultimately.” His observation is just as accurate today as it was when he said it in 2013. And, fortunately, Congress has recognized the need for adequate funding: the omnibus budget bill it passed earlier this month funded international affairs at roughly the same level as in previous years, in a sharp rebuke to the multibillion dollar reductions proposed by the Trump administration.

Every day, dedicated and experienced American diplomats serve abroad—often in extremely difficult environments—to protect U.S. citizens, boost U.S. exports and foreign direct investment in the United States, promote U.S. values, and build alliances. In his confirmation hearing, Pompeo should affirm that he understands that America’s prosperity and security depend on these essential missions being performed by U.S. diplomats.

Morale in the State Department has plummeted during Tillerson’s tenure, resulting in a mass exodus of experience that will take years to replenish. Hiring has also been sharply reduced. To make matters even worse, far too many senior leadership positions remain unfilled fourteen months into the administration. We currently have troops in Iraq, Syria and Afghanistan. But, inexplicably, we do not yet have Assistant Secretaries in place for either the Near East or South and Central Asia. Also, Trump has not nominated ambassadors for key posts such as Seoul, Ankara and Riyadh. Career ambassador Tom Shannon (one of just two four-star equivalents left in the ranks of the Senior Foreign Service) is the only under secretary (out of six) who was confirmed by the Senate—and after two years in the job, he has recently announced his plans to retire.

It is an open question whether Pompeo can restore U.S. global leadership, given that so much depends on the ever-shifting whims of the president. But Pompeo’s experience at West Point, as an Army officer, and at the Central Intelligence Agency, should have instilled a deep understanding about the paramount importance of recruiting and sustaining the very best talent available to serve our nation.

That is why the Senate should use his confirmation hearing to secure his public commitment for meeting this goal—and that can start with his promise to reverse the funding cuts and hiring trends that threaten our diplomatic corps and thus our national security.

Together, my former colleagues and I who sent our letter to Senators Corker and Menendez have proudly represented the United States in over 140 countries, as well as at the United Nations, NATO, and other international organizations. We loyally served under both Democratic and Republican administrations because the oath of office we each swore was to the Constitution—not to a single political party or individual. We all share a common love for our country, a commitment to public service, and a keen understanding that robust U.S. diplomacy is essential to defend our nation and promote its interests globally. And I hope that Mike Pompeo will make it clear that he shares these beliefs as well.

Gordon Gray is the Chief Operating Officer at the Center for American Progress. He was a career foreign service officer and served as U.S. ambassador to Tunisia at the start of the Arab Spring, and as Deputy Assistant Secretary of State for Near Eastern Affairs.