Why Precisely Is Coates Bashing Sanders? 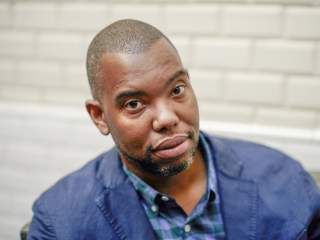 Well, well, well. Ta-Nehisi Coates is back in action. “Why Precisely Is Bernie Sanders Against Reparations?” is his latest condemnation of white America, appearing in the Atlantic, but its target is not benighted conservatives. Instead, it is, of all people, Bernie Sanders whom Coates now finds wanting. Speaking in Iowa last week, Sanders responded to a question about reparations by saying he didn’t think it was a good idea: “No, I don’t think so. First of all, its likelihood of getting through Congress is nil. Second of all, I think it would be very divisive.” Writing in the Atlantic, Coates said Sanders “should be directly confronted and asked why his political imagination is so active against plutocracy, but so limited against white supremacy.”

Coates, an expert at dumbed-down Marxist analysis presented as cultural criticism, has become the go-to critic about American racism. A little over a year ago he created a frisson of delight on the left with his sprawling Atlantic essay “The Case for Reparations.” The truth is that he made no case at all. Coates’s proposed solution to the centuries-long suffering of blacks in America was as meek as his piece was grand: assemble a congressional committee to look into the possibility of one day awarding monetary compensation to African-Americans. There was no timeline, no suggested amount, neither per individual nor for the black community as a whole. There was no itemized invoice submitted for hundreds of years of unpaid labor with interest added for a hundred years of Jim Crow and the degrading violence that came with it. There was just the indictment, laid at white feet.

Coates’s latest work, a memoir entitled Between the World and Me, has risen to the top of both hipster and mainstream reading lists. With high praise from Toni Morrison to Jay-Z, the cultural message surrounding the release of the book was clear: if you don’t read this book, then you don’t care about racial issues. It was surprising—or perhaps not—that more people didn’t try to refute the claim that Coates was a natural successor to black writer and civil rights activist James Baldwin. Such a statement is an insult to Baldwin devotees.

I realize that not many people have actually read Baldwin, or read him closely enough. It makes one wonder if part of not appearing racist means pretending to read black writers, with the assumption that since most of us look alike, we must think and write alike as well. Baldwin’s motifs of feeling lost and struggling to gain a sense of self in an unsympathetic society is a human experience as much as it is a black one, and draws extensively from Baldwin’s own rich experiences.

Baldwin was a preacher’s son who followed in his father’s footsteps before abandoning that vocation to become a literary phenomenon and civil rights advocate. There are many reasons why Baldwin and Coates are not at all similar, but their stances on how to address injustices against black Americans should be the biggest indicator of why that is the case. Baldwin’s activism suggested that he believed racist attitudes could change in this lifetime. Coates the nihilist par excellence sees the black body as fodder for white pillaging with little reason to hope for more. Coates’s career more closely resembles that of Richard Wright, a black writer who focused his literary work on racial injustice and had ties to the Communist Party in New York, which he publicly repudiated in the famous book The God That Failed. Wright left for Paris in 1946 and never returned, choosing instead to focus on his work instead of the injustices that plagued his childhood. False comparisons like this matter when analyzing Coates’s work, especially in the modern context into which he repeatedly thrusts himself. Coates wishes to engage with the great racial issues of his time while remaining above reproach. No black writer gets that luxury, especially not one who purports to be on the side of the Black Lives Matter movement.

Now Coates, who recently moved to Paris and has been awarded a MacArthur genius grant, is lambasting Democratic presidential candidate hopeful Bernie Sanders for failing to tackle what Coates calls “white supremacy.” His anger has been aroused by Sanders’s sensible observation that reparations are, first and foremost, impractical. Coates reasons that much of Sanders’s platform is impractical, so why not indulge black voters one more fantasy?

Here Coates tips his hand. Coates doesn’t actually believe that Sanders can make good on any of his campaign promises, racially motivated or not, but Coates wants Sanders to earnestly pretend that he will. In other words, Coates wants Sanders, in effect, to peddle illusions. Why? What would that achieve? Haven’t black Americans had enough of being lied to? How would being lied to change anything for blacks in this country? It wouldn’t, and that’s the point. Coates does not believe things for blacks will change, even if they should. Thus Coates is validated in his narrative that blacks are perpetual victims of a vicious history.

Of course reparations are impractical, and Sanders is right to say so. (The IRS has enough difficulty calculating tax refunds for its own citizens. Imagine calculating back wages for the descendants of slaves.) If they weren’t, Reconstructionist policies would have granted each newly freed slave forty acres and a mule and racial problems would not exist.

It’s odd that Coates expects a white man to be in charge of ending what he calls white supremacy, as opposed to appealing to Barack Obama, a black man who holds the highest office in the land. There’s a reason for that. The tickle of authenticity comes cheap. But the second Coates looks to black leadership for change, his proposals are no longer radical chic, and reality must set in. As long as words like “reparations” can float freely in columns and cocktail parties, blacks are free to project their pain, past and present, on rhetoric that serves no purpose other than to titillate the American left.