Why President Obama Should Go to Hiroshima 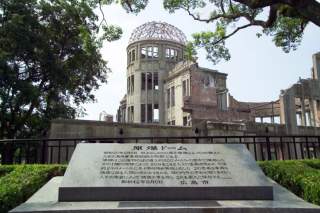 The ghosts of World War II are persistent things; they linger even between the closest of friends. In April, a Pew Research poll found that almost 80 percent of Japanese believe the atomic bombs dropped on Hiroshima and Nagasaki were not justified. More surprising, 44 percent of Americans agreed or said they were not sure. As the 70th anniversary of the end of World War II approaches, and with a new bilateral security agreement in tow, it is time for America and Japan to move decisively past the darkest era of their relationship.

President Obama can play the lead role. Next August, he should become the first sitting U.S. president to attend Hiroshima’s Peace Memorial Ceremony, which commemorates the victims of the world’s first atomic bomb. By doing so would emotionally reinforce the U.S.-Japan alliance and, more importantly, remind the world why it must not stumble down the nuclear path again. Coupled with an effective Iran deal, that would be a fitting curtain call for a president who has staked his foreign policy legacy on bolstering the nuclear nonproliferation regime and rebalancing to Asia.

In that region, the run-up to the 70th anniversary of the end of World War II has been particularly contentious. Amidst textbook wars and historical mudslinging, pleas for Japan to squarely face its wartime history have reached a fever pitch, and for good reason. Prime Minister Shinzo Abe’s attempts at historical alchemy have needlessly reopened old wounds, damaged relations with Seoul, Beijing, and Washington, and tarnished Japan’s global reputation. But wartime reflection should not be limited to Japan.

In August 1945, the first atomic bombs ever used on human beings silenced two bustling cities and killed over 200,000 civilians. Thousands were incinerated on impact; thousands of others perished only after enduring the most gruesome suffering. One physician recalled that patients “had no faces! Their eyes, noses, and mouths had been burned away, and it looked like their ears had melted off. It was hard to tell front from back.”

As horrific as it was, many argue that the bomb was a necessary evil that saved countless American lives. They cite Imperial Japan’s fanatical willingness to continue the war, even if it meant the annihilation of the nation. That is not an overstatement; many in Japan’s military wanted to fight on even after Hiroshima and Nagasaki. On the morning of August 15, approximately 1,000 soldiers joined a wild coup attempt that nearly succeeded in preventing Emperor Hirohito’s surrender broadcast.

Little Boy was not the first option. Operation Olympic, an American plan for a land invasion through Japan’s southern island of Kyushu, was seriously considered and ultimately scrapped when estimates ranging from 40,000 to 300,000 American losses crossed President Truman’s desk.

Others contend that Japan’s defeat was imminent and that the bombs were a cruel and tragic excess. Force had already paved the way for diplomacy; there was no need for more of it. In particular, preserving an acceptable role for the emperor would have preserved Hiroshima and Nagasaki. Years later, Dwight Eisenhower lamented, “Japan was at the moment seeking some way to surrender with minimum loss of ‘face.’ It wasn't necessary to hit them with that awful thing.”

There is no neat resolution to the debate. It is possible to nod to the strategic considerations of the bomb while recoiling at its moral implications. Something in our common humanity rails against the impersonal, extermination-like quality of the attack: the instant incineration of 200,000 people from afar. That is not a bad thing to acknowledge.

Those who would equate going to Hiroshima with American kowtowing are missing the point. In 2010, former Ambassador John Roos became the first U.S. representative to attend Hiroshima’s Peace Memorial Ceremony. Current Ambassador Caroline Kennedy attended both ceremonies in Hiroshima and Nagasaki last year, and another to mark the 70th anniversary of the Tokyo firebombing, which killed 100,000 people—mostly women, children, and the elderly—in the single evening of March 9-10. That is more than five times the number killed in the Dresden bombing.

Going to Hiroshima is not about apologizing; it is about remembering the victims of one of history’s great tragedies. It is not an act of apology; it is an act of peace.

By going to Hiroshima, President Obama could energize the U.S-Japan relationship by remembering the destruction out of which it has grown. Once locked in a catastrophic war, the U.S.-Japan alliance has been a pillar of global stability and prosperity for the past 70 years. Once bitter adversaries, the U.S. and Japan can now celebrate 70 years of friendship between their governments and their people. Given what they have been through together, that is nothing short of remarkable.

A visit to Hiroshima would also demonstrate one of America’s enduring strengths: its capacity for honest and painful reflection on its own history. In a region where history has become a perpetual source of enmity between governments and their people, reflecting on our own controversial history could have a calming influence.

President Obama has made pivoting to Asia and strengthening the nuclear nonproliferation regime central goals of his foreign policy. For that reason alone, failing to commemorate the devastation wrought by nuclear weapons on our most important ally in Asia would be a missed opportunity.

Six years ago in Prague, President Obama boldly announced that America would lead the charge to a world without nuclear weapons. He acknowledged, “As a nuclear power, as the only nuclear power to have used a nuclear weapon, the United States has a moral responsibility to act.” That includes a moral responsibility to remember. To Hiroshima, Mr. President.

Zach Przystup is the Assistant Director for Global Executive and Diplomatic Education at The Fletcher School at Tufts University, where he received a Master's degree in U.S. Foreign Policy and Pacific Asia.