Why President Trump Has Sweeping Constitutional Powers to Disperse Protesters 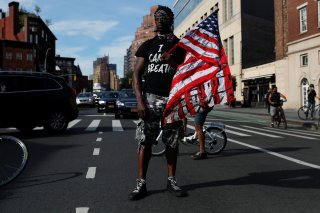 When Donald Trump waked across Lafayette Square on June 1 to visit St. John’s Church, it was supposed to be a victory lap for him. But the clearing of the protesters has triggered a lasting controversy over the administration’s move, including a statement of contrition from the Chairman of the Joint Chiefs of Staff Mark Milley that he accompanied Trump. Attorney General William P. Barr has also sought to dissociate himself from the order to remove the protesters. The Center for the National Interest held a webinar on Tuesday on controversies such as this over social protests and U.S. constitutional law. What powers does the government have under the constitution and the Insurrection Act to employ military forces to establish and maintain societal order? What laws govern the actions of police in dealing with protesters who are peacefully exercising their right to assemble? Noted constitutional law expert David B. Rivkin addressed these questions in a colloquy with National Interest editor Jacob Heilbrunn. The exchange can be viewed below: